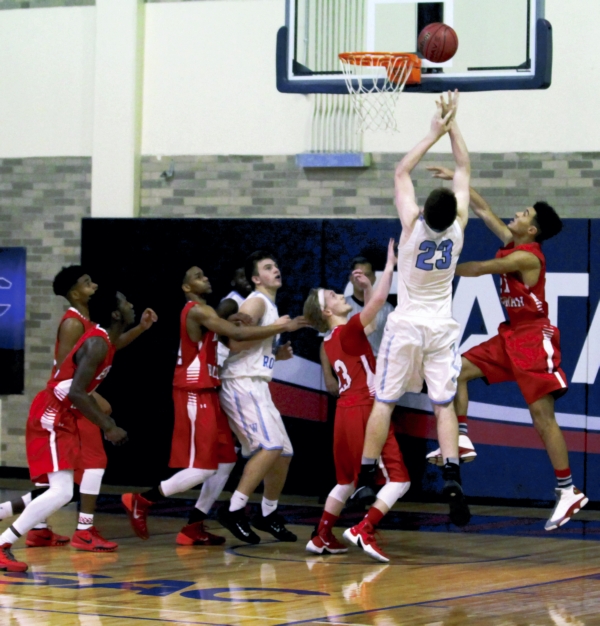 SALISBURY — What a difference a day makes.

Just 24 hours after losing on a buzzer beater, the West Rowan Falcons turned back an inspired effort by East Rowan as center Caleb Mauldin’s put-back with just over one second left produced a dramatic 43-41 win.

The consolation battle in the Dale’s/Sam Moir Christmas Classic Tuesday morning saw West rally from 8 down in the final three minutes thanks to a swarming pressure defense and the inside presence of Mauldin and forward Austin Love.

The East version of Austin Love completed a three-point play at 3:09 to play for a 41-33 Mustang margin. But West (5-5), which out rebounded the Mustangs 33-19 for the game, scored on three possessions when Mauldin and Love grabbed offensive boards and laid it back in. At the same time East (1-11) was wilting under pressure with three turnovers and a charging foul.

Mauldin’s put-back with 58 seconds left tied the score at 41-41 then a high pass turnover by the Mustangs set the stage for West to set up a final play with 24 ticks remaining.

The Falcons ran the clock down to six seconds then speedy guard Paris Hillie penetrated the lane for a layup. The ball bounced high off the rim but the 6-7 Mauldin was in the right spot to grab the ball and drop it in with 1.3 seconds left. The game clock ran out before East could get the ball back in play.

The game-winning play was nothing fancy, noted Mauldin, who scored 22 points and grabbed 12 rebounds in the contest. “I was just trying to fight around them inside and the ball sorta came to me,” he said. “It was just a matter of being in the right position.”

Falcons coach Mike Gurley said with a tied score, he wanted to run the clock down as much as possible then let guards Hillie or Martavio Rankin go inside to create a shot with Mauldin and Love down low, ready to put back a miss. That is exactly the way it played out.

“East actually did a good job of blocking Caleb out,” Gurley said of the winning play,” but he kept moving and got the rebound really high.”

Mustang coach Kurt Misenheimer was frustrated with a tough loss after a solid effort, as his team dropped their 11th straight including an earlier 65-51 setback to West in mid-December. “I wouldn’t have done anything different,” he said. “If I had a 6-7 guy in the middle, I would have done the same thing. Down the stretch, we executed for the most part but two or three turnovers at the end cost us the game.”

East led throughout the first half, then the two teams swapped the lead six times to open the third period. Rankin had a three-point play as well as a three pointer while Trevor Scruggs had a long three for East as well as a couple of inside shots in the scoring flurry. East then built a little working margin to start the final quarter only to have it wilt away in the final three minutes.

Nine Mustangs figured in the balanced scoring led by Scruggs with 9, Love with 7 and senior forward Naquis Caldwell, back from an extended absence due to a knee injury, with six points and six rebounds. Mauldin’s 22 came one day after he notched 32 in a last-second loss to Davie.  Rankin added 10 for the Falcons while Love scored 4 to go with an important 11 rebounds.

West faces the Carson Cougars at 1:30 p.m. today for 5th place while East battles South Rowan for 7th at 10:30 this morning.