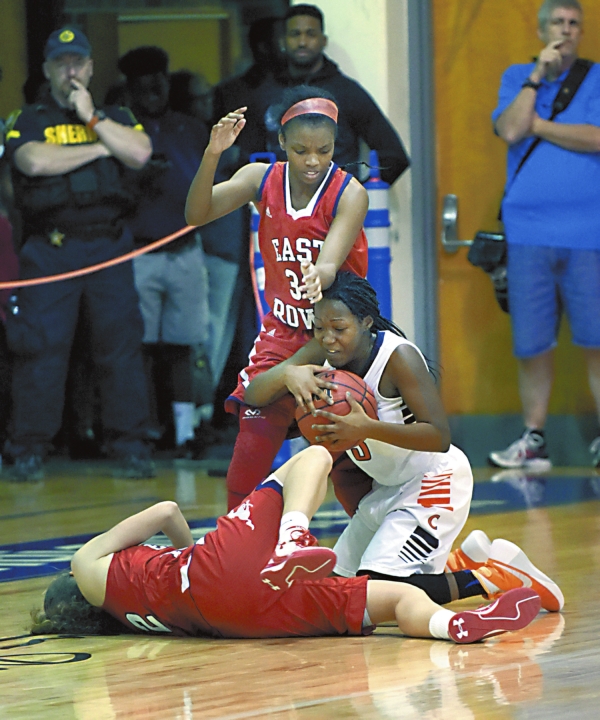 Carson's Olivia Gabriel 3 on the floor with the ball and East's Jocelyn Lowe 12 on the floor and Shenique Pharr 32 standing in the Dales's Sporting Goods Sam Moir Christmas Classic. photo by Wayne Hinshaw, for the Salisbury Post

SALISBURY — Everyone agreed that East Rowan’s girls played their best game all season.
It still wasn’t enough. Carson got 12 offensive rebounds — including a couple of huge ones on missed free throws — and beat the Mustangs 56-50 in a Tuesday afternoon semifinal in the Dale’s Sporting Goods / Sam Moir Christmas Classic.
“I thought for a lot of the game East simply played harder than we did and ran the floor harder than we did,” winning coach Brooke Misenheimer said. “We did just enough to win.”
Sixth-seeded East (6-6) has struggled to make shots, but Shenell Pharr made four 3-pointers on her way to 16 points and Jocelyn Lowe made two 3-pointers, handed out eight assists and blocked three shots. East shot a respectable 43.4 percent, with Brittany Small and Lauren Weisensel getting inside buckets, and Shenique Pharr scoring in transition.
Except for a few rebounds, the game went exactly the way the Mustangs had planned for it to go.
“We’re making progress and we competed very well,” East coach Danielle Porter said. “We didn’t give Carson easy shots. We made them earn everything.”
When the teams met in Granite Quarry in early December, second-seeded Carson (10-2) crushed the Mustangs 59-37, with McKenzie Gadson and Olivia Gabriel romping for 21 points apiece in transition. East took most of the layups away in the rematch, but Gabriel still got to the foul line, went 8-for-10 on free throws and scored 19 points. Gadson and Anne Marie Turney (10 points) carried the Cougars in the first half. Gadson made acrobatic, hanging shots and finished with 12 points.
“East was much faster running the floor today,” said Gadson, an impressive freshman who moved to the area from Florida last summer. “We realized that it was going to be a tougher game than last time. We were going to have to give it all we had.”
East got three flying buckets from Shenique Pharr and led 16-12 after a quarter. Gabriel made the 3-pointer that gave the Cougars a 27-25 lead at the break.
Carson had a spurt in the third quarter. Maren Shumaker worked for a three-point play by rebounding a missed throw, and Kailie Ketchie tossed in two 3-pointers.
“They weren’t coming out on me, so I took them,” Ketchie said.
East fought back. All five East starters scored in a frenzied third quarter, and Carson was fortunate to take a 42-39 lead to the final eight minutes.
“We made shots, we fought, and we gave ourselves a chance today,” Lowe said.
When Small scored on a drive it was 43-all with 4:17 left, but after a scramble for a long rebound, Sydney Taylor knocked down a shot for a 45-43 Carson lead with 3:52 on the clock. That shot by the diminutive Taylor gave Carson the lead for good.
A free throw by Gabriel gave Carson a 50-46 lead with 1:16 left, but Shenell Pharr made a 3-pointer just 13 seconds later. Carson’s lead was down to 50-49, and the pressure was on the Cougars.
“We wanted to show improvement today from the way we’d been playing in conference games,” Shenell Pharr said. “We wanted to shoot better and work together better. We did that.”
With 43 seconds left, Gabriel made two clutch free throws for a 52-49 Carson lead.
After East missed, Gabriel went back to the line. She made the first free throw. She missed the second, but Ketchie grabbed the rebound.
“Sometimes teams take rebounding lightly on a free throw,” Ketchie said. “I boxed out hard, and the ball came off to me.”
That extra possession allowed Carson to run precious seconds off the clock.
The Cougars turned it over with 24 seconds left, but Shenell Pharr missed a 3-pointer, Gadson went high to secure the rebound, and Gabriel made two more free throws to clinch victory.
“It’s very hard to defend Carson because everyone has to pinch to help on Gabriel’s penetration, but we did a decent job on her today,” Porter said. “Carson is a quality team. They got big offensive rebounds and they made their free throws at the end.”
Carson won the rebounding battle by committee with Gadson, Ketchie and Turney getting five each. Shumaker had four of Carson’s 12 offensive boards.
Carson needed every rebound it could get to hold off the Mustangs.
“We’re happy to be in the championship game,” Misenheimer said. “But we know we’ve got to do the little things better than we did today and we’ve got to run our offense better.”
•••
NOTES: Obviously, this is Gadson’s first experience with the Christmas tournament. “Everyone told me there would be big crowds and that it would be a lot of fun,” she said. “They were right.” … East will play in the 3 p.m. game for third place against West Rowan. Carson plays in the title game at 6 p.m. against North Rowan.