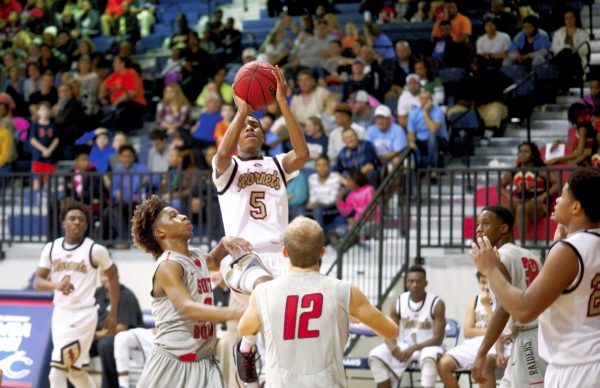 SALISBURY — For the second straight year, the Salisbury and South Rowan boys met in the first round of the Dale’s/Sam Moir Christmas Classic — in the event’s No. 1 vs. No. 8 game.

Last year, South, the eighth seed, upset the Hornets. In yesterday’s game at Goodman Gym, the same script seemed to have been brought out until Salisbury woke up in the middle of the second period, raced out to a 30-17 halftime lead, and went on to win the game, 60-37.

Salisbury (10-1) advances to the tournament semifinals tonight at 7:30, playing surprising Mooresville. South (0-11) falls into the consolation bracket, and plays at 1:30 today against county rival Carson.

In a turnover-laden first half by both teams, Tre Littlejohn’s layup with three minutes left gave the Raiders a brief, 17-15 lead. Salisbury then went on a 15-0 run to end the second quarter, taking command at the break.

The Hornets’ outburst was led by seniors DJ Alexander and DeShawn Troutman, both of whom had steals at half-court and layups. Alexander scored five points during the decisive run, Zae Harris had two put-backs and Isaac Baker scored a layup. Tre Oats sank a follow shot at the buzzer, and suddenly, the score was 30-17.

“We calmed down, finally, and played,” said first-year Salisbury coach Bryan Withers. “Again, it’s their first time in this tournament with me and my expectations are different. It’s not so much what we do on the offensive end, but we’ve got to bring defense and a lot of them are not used to that.”

Salisbury has a quality 16-man roster and Withers is trying a lot of different combinations.

“I rotate a lot of people,” continued Withers. “You can play as hard as you want to for 2 to 3 minutes and then you’ve got to come out. We’re going to get it together. We can be very good but we’ve got to learn to share better. We did a much better job of passing the ball tonight, but our bigs have got to finish. We missed too many shots around the basket.”

Early in the third period, Ian Bradshaw’s jumper cut South’s deficit to nine points at 35-26, but Salisbury went on another run, this one 9-0, to pretty much end any remaining suspense. Senior forward Wes Fazia had four points during that stretch, and Alexander and Oshaun Robinson added buckets as well.

The third quarter ended at 48-28 and the Raiders lost further ground in the final period as three-point daggers from Baker and Elijah Moss iced the issue.

South hurt itself with poor shooting and turnovers, committing 12 of its 20 turnovers in the middle two quarters, definitely contributing to Salisbury’s pulling away.

“It’s an effort-thing and we had it for a quarter and half,” said South first-year coach Andre McCain. “We played for 12 minutes, but not for that last four minutes (of the half). Salisbury upped their intensity and we didn’t.

“Turnovers and offensive rebounds, that’s our achilles heel,” continued McCain. “We turned he ball over too many times to be competitive. We’ve just got to put a whole game together and play as a team and someone has to step and be a leader on the court.”

Salisbury’s balanced scoring was led by Alexander, Troutman and Fazia, all with 10 points each. Baker scored seven points and Oats added five points and grabbed a game-high seven rebounds.

South was led by Marquis Rhyne’s 11 points, nine of which came on three-point field goals. Sophomore guard Jaqwon Hester scored eight points, but all in the first half.

The East Rowan Mustangs are not quite ready to relinquish their title as defending girls champions in the Sam Moir... read more