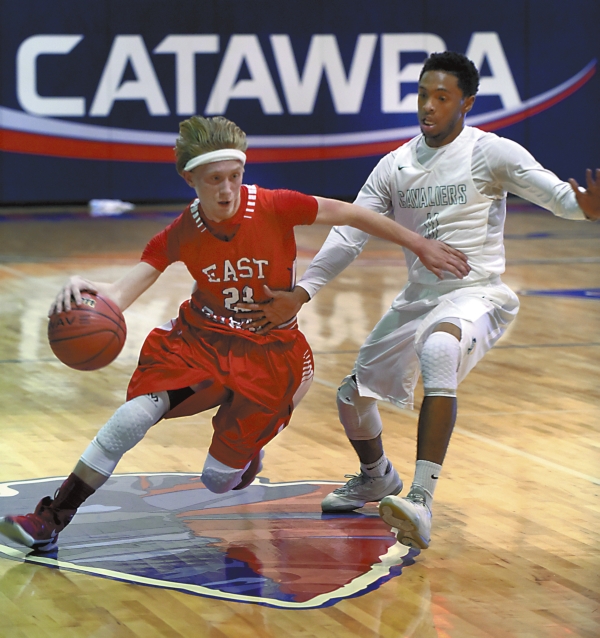 SALISBURY — North Rowan coach Andre Mitchell opens the gym every Saturday for extra shooting.
A handful of Cavaliers usually take advantage of the opportunity.
“Joseph Scott is one of those four or five faces that we see every Saturday,” North coach Andrew Mitchell said. “He spends a lot of time on his game. He believes in himself.”
Scott, a junior, got his points inside for the Cavaliers last season when he was second team all-county. But all those extra shots and all those hours working on his shooting form are paying off. Now he scores outside as well as inside and he’s turning himself into a college prospect.
Scott was the best player on the floor in North’s 74-55 win against East Rowan on Monday in the first round of the Dale’s Sporting Goods Sam Moir Christmas Classic. That’s saying something because one of Scott’s teammates is reigning Rowan County Player of the Year Jalen Sanders.
It’s not like Sanders has lost a step. Scott was just really good.
“Joseph has been our most consistent player all season,” Mitchell said. “You know what you’re going to get from him every night.”
Scott scored 17, Sanders had 14, and Josh Handy jumped off the bench for 12, as the second-seeded Cavaliers knocked out the seventh-seeded Mustangs by halftime. Henderson Lentz also came off the bench for North (8-2), made two 3-pointers and scored eight.
Guards Lucas Morton (15 points) and Bravon Goodlett (13) turned in strong games for the Mustangs (1-10), who lost for the 10th straight time.
The Cavaliers trailed 7-4 early as Morton started fast, but then North produced a 13-0 run that set the tone. Mostly it was Scott and Sanders finishing on the run after East missed or turned it over. A.J. Shields and Alonzo Sirleaf contributed boards and long-armed defense to the flurry.
“The focus was defense,” Scott said. “East is physical. That’s not a team you can sleep on. If we’d slept on them, they would have beat us the same way they did last year.”
North also was matched up in the 2 vs. 7 game with East last year. East upset the Cavaliers. His players remembered that disappointment strongly enough that Mitchell didn’t have to mention it.
“We didn’t talk about last year at all,” Mitchell said. “We just worried about taking care of business today. We didn’t play great, just OK. We still have to improve a lot on defense if we’re going to do anything.”
Other than praising Morton for “playing his butt off,” East coach Kurt Misenheimer wasn’t thrilled with his team’s showing.
“I don’t think it was so much that North was clicking as it was us making bonehead plays, failing to meet passes, and turning the ball over,” Misenheimer said. “Some really good teams have pressed us this year, and we haven’t turned it over like that. Those early turnovers gave them a lot of easy points and helped them get a big lead.”
Lentz, continuing a comeback from last summer’s cardiac arrest, made a 3-pointer to open the scoring in the second quarter. His long pass led to a 3-pointer by Scott for a 40-21 halftime lead.
“Henderson and I have great communication on the court,” Scott said. “He’s not only come back, he’s come back stronger than ever. He’s a warrior. He makes a huge difference for us.”
Even with Bravon Goodlett making two 3-pointers in the third quarter, East couldn’t dent North’s lead. Sanders had three buckets in the period, and Lentz and Josh Ellis knocked down 3-pointers.
Ellis Taylor made a 3-pointer and had a strong fourth quarter for East, but the Cavaliers had no trouble finishing off the victory. North led by 23 early in the fourth quarter before settling for the 19-point win, exactly the same margin as halftime.
“We traded buckets with them in the second half,” Misenheimer said. “But we put ourselves in a 20-point hole with missed layups and turnovers. It’s hard to come back from that.”
North plays Davie in a 4:30 p.m. semifinal today.
East is in a 9 a.m. consolation game against West Rowan.

***
NOTES: A story on Lentz’s return to the floor will be in Friday’s edition.

Moir — North Rowan girls hold on to win against Davie