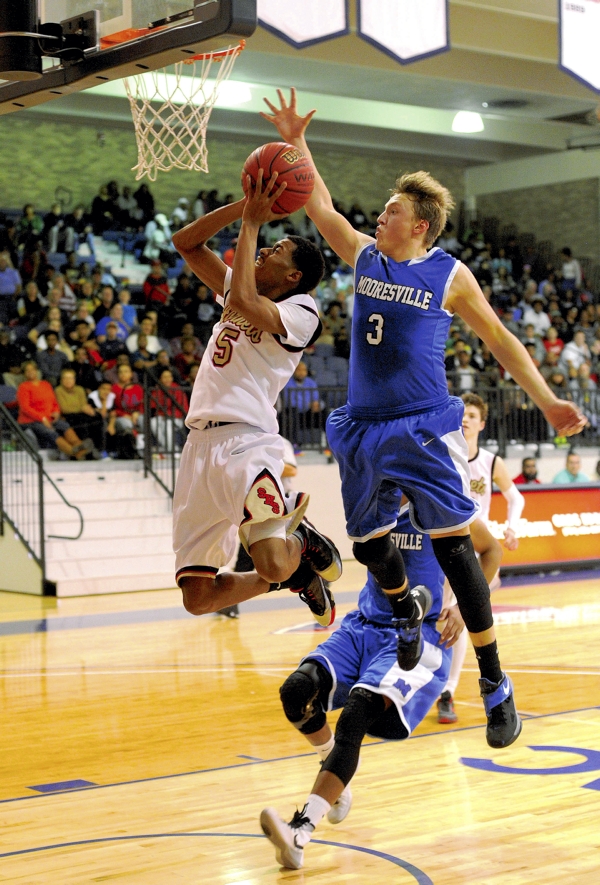 SALISBURY — Mooresville’s cardiac kids have made themselves downright comfortable in the Dale’s/Sam Moir Christmas Classic at Goodman Gym this week.

One night after staging a fourth-quarter rally to beat Carson in the first round, the Blue Devils got a three-point basket at the buzzer to gain a 65-62 semifinal win against top-seeded Salisbury on Tuesday.

“The difference between (the two), was last night, we played lazy,” coach Michael Micklow said after Mooresville (8-3) earned a berth in tonight’s boys championship game against North Rowan. “Tonight, we played hard after they hit some shots in the first half. I think they had five 3-pointers in the first half. But we’re better off right now than we were (Monday). Last night, I didn’t know if we were going to come back.”

They’re better off because junior point guard Noah Allen — a transfer from Georgia — banked home a 3-point shot from the left side as time expired, sending Salisbury to the consolation final instead of the title tilt.

“We were going at our pace and then we changed up and went at their pace,” Salisbury coach Bryan Withers said after the Hornets (10-2) lost a 25-11 second-quarter lead. “We started doing things for somebody else, trying to do too much. We didn’t make the easy plays.”

Salisbury’s quick start was easily attributed to the long ball — three of them by Will Leckonby and one each by Alex Yang and DeShawn Troutman — triggering a 19-11 first-quarter lead. Second-period layups by D.J. Alexander and Troutman put the Hornets ahead by 14 points.

“We’re used to being tested,” Mooresville senior Corban Usry said after the Devils won their sixth straight. “We’ve been tested all season. This was just another chance to fight back.”

Mooresville closed to within 36-27 by halftime, then pulled within three points when 6-foot-5 junior Jay Davis muscled his way for three successive layups to open the second half.  The Blue Devils closed the third quarter on an 11-4 run and trailed by only 48-46, heading into the fourth period.

“That was free throws and us getting a little bit tight,” Withers said after Salisbury converted 15 of 32 foul shots. “In spite of all that, we were in the right position. We just didn’t make the right plays.”

The final quarter was an eight-minute test-of-nerves. The lead changed hands five times in the last 5:40.

Salisbury took its final lead when Tre Oats received a in-stride feed from teammate Zadrian Harris and hit a layup, providing a 57-56 edge with four minutes to play. Mooresville bounced back and went up, 60-58, when Usry drove  for a layup and was hacked with 2:04 on the clock. Although he missed the ensuing free throw, he corralled the rebound and sank another basket two seconds later.

“The ball came perfectly to me” said Usry, a former Salisbury player. “I got a great boxout by (Davis) and went right to the goal.”

Salisbury used a pair of Troutman free throws to draw within two points, then tied the score when Alexander drove the left baseline for a layup with 37 seconds remaining. That set the stage for Allen’s game-winner.

Following a Mooresville timeout, Allen took an inbounds pass, patiently worked the clock in the backcourt and launched a 20-foot shot his teammates won’t soon forget.

“Hey, it banked, but it dropped,” Allen smiled after topping all scorers with 16 points. “I wanted it to be the last shot. At worst, we were going to overtime. It’s funny. When I let it go I knew it wasn’t a swish, but I knew it was going in. In my head I was all confidence.”

Salisbury will take on Davie County in the third-place game at 4:30 today.