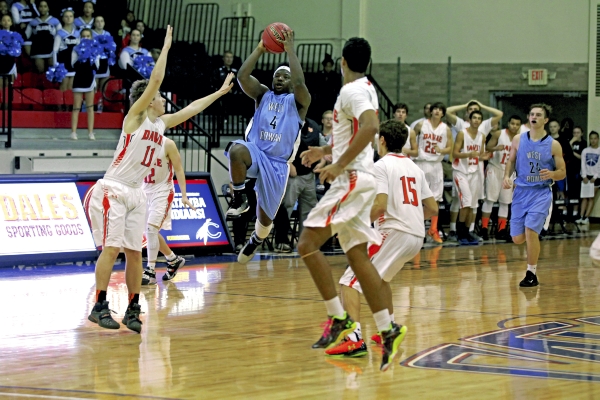 The common theme was “second chances” and the Davie War Eagles made the most of theirs in the waning seconds Monday morning to claim a tense 74-73 win over West Rowan in a first round boys game of the Sam Moir Christmas Classic.

Junior guard Cory Heiner took a feed from Jordan McDaniel for a short baseline jumper with 3.9 seconds left to secure the win for the second seeded War Eagles (8-3). Paris Hillie’s half court heave at the buzzer was off the mark for the sixth-seed West (4-5), defending champions of the Moir event.

West trailed most of the game against remarkably balanced scoring by the 4A War Eagles team but the inside dominance of center Caleb Mauldin (6-7) and Austin Love (6-3) suddenly had the Falcons in the lead 71-69 with 3:15 left. The margin was still 73-72 with 27 ticks remaining when Love misfired on the front end of a one and one.

After a timeout, Davie’s Nic Starnes missed on a jumper at 10 seconds left, and in a wild scramble on the floor, McDaniel came out with the ball and fed Heiner for the game winner.

“I was surprised it came to me,” said Heiner who had a career high 15 in the contest. “But my teammate made a great pass and I just laid it up there. I think it shows our heart and dedication as a team to fight back like that.”

War Eagle head coach Mike Absher said his team made the most of a missed opportunity. “We talk about second chance opportunities all the time and keeping the ball alive,” he said. “To lose a lead then finish a game like that with a win speaks very highly of our team.”

West Rowan coach Mike Gurley stuck with the same theme.” It is not the first shot that beats you, it is that second shot and the rebound,” he said. “We just wanted to make a stop but that kind of thing has gotten us twice this year before today.”

With five players scoring in double figures, the War Eagles surged ahead by 10 points three times in the first half. The margin reached 12 late in the third quarter on a rare four-point play by Davie’s Heath Slabach. West battled back, however, as Hillie (13 points) scored four to closeout the third period and trim the margin to 61-55.

The big sophomore Mauldin then came alive for West with a couple of blocked shots and a series of put backs and lay-ups as he scored 23 of his game high 32 points in the second half. Love (10 points and 10 rebounds) contributed a couple of inside put-backs of his own to spark the big rally.

“Love was a monster in there,” Gurley said, “and Mauldin dominated as well. We did some good things but too many times today impatience got us.”

Davie advances to the Moir semi-finals today with a 4 p.m. matchup against second-seeded North Rowan. West is in the 10:30 a.m. consolation game this morning against East Rowan.