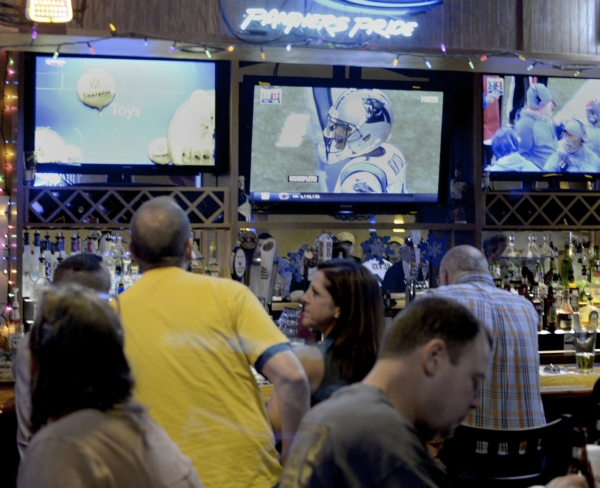 Hugh Fisher/For the Salisbury Post Carolina Panthers fans at East Coast Wings & Grill in Salisbury watch as the final minutes of Sunday's game tick away. The Panthers were defeated by the Atlanta Falcons in their first regular-season loss since November 2014.

SALISBURY — There was no joy in Panthers Nation last night.

In sports bars, restaurants and thousands of living rooms, fans gathered hoping to see the Carolinas’ NFL team beat the Atlanta Falcons for the second time and advance to 15-0 on their way to a perfect season.

Even with the team trailing and less than two minutes left to play, fans at East Coast Wings & Grill in Salisbury were clapping, rallying behind Cam Newton and the Carolina offense.

“This is where you find out if they’re Super Bowl ready,” said Jeff March, of Lexington, watching the game with his wife, Joan. “We’d better get our act together.”

“Come on, Panthers!” Lori Harrison shouted from a nearby table. “We’ve got this!”

And then, instead of throwing a pass that could have kept a game-winning drive alive, Cam Newton fumbled the football and it was recovered by the Falcons’ Adrian Clayborn.

The Carolina Panthers lost their first regular-season game since November 2014, with a final score of 20-13.

Throughout the bar, there were sighs of frustration, a few angry exclamations and more than one who wondered why the Panthers had to lose to the Falcons, of all teams – a divisional rival the Panthers defeated 38-0 just two weeks ago.

“We had this,” Harrison said. She, husband Larry and son Spenser looked on as the Falcons knelt down to run out the clock and seal the Panthers’ defeat.

“They got outplayed,” Harrison said. “But it’ll make ’em stronger.”

And that was a sentiment heard from a number of Panthers fans who chose to look on the bright side of this loss.

Carolina’s NFL team still has a playoff berth and a first-round bye. There’s still a chance for them to take football’s biggest prize in the Super Bowl.

“I’m disappointed by the results, but which is more important — a perfect season or a Super Bowl win?” Jeff March said.

March, with his wife and a table full of friends, debated whether or not the perfect season was worth being upset over.

The only team in the National Football League to ever achieve a perfect season was the 1972 Miami Dolphins, but the regular season was shorter then, as well, March said.

That didn’t stop Sunday’s loss from being a disappointment. Nicole Miller came to watch the game wearing her Greg Olsen No. 88 jersey – the number of her favorite player.

“For one, (Olsen) is really good at what he does,” Miller said. “But also, I have a friend that’s his cousin!”

At the same table, her sister Amy Long watched the game with children Megan and Nick Long. They were pulling for the Panthers while simultaneously watching the Detroit Lions play on another screen.

Nicole’s husband, Bill, tried to cheer her up as the last hopes of a Panthers win faded. “She likes to go to DJ’s in Salisbury, or East Coast Wings, or any sports bar,” Bill Miller said.

To add further tension, Bill is a native of New Jersey and a Philadelphia Eagles fan. “When Carolina plays the Eagles, she goes in the other room to watch!” Miller joked.

Tim DeZego, of Lexington, was also pulling for another team along with Carolina. He came to the game wearing his New York Jets jersey, and cheered along with others when his team scored a winning touchdown in overtime to defeat the New England Patriots by a score of 26-20.

“What the Panthers have going for them, other than Cam Newton, is their coach,” DeZego said.

“We had some opportunities we didn’t take advantage of,” Carolina Panthers Head Coach Ron Rivera was quoted as saying in a post-game press conference. “We didn’t coach to our abilities, we didn’t play to our abilities … The truth of the matter is, we came in, we played hard, (but) they played better.”

The Carolina Panthers face the Tampa Bay Buccaneers for their last regular-season game on Sunday, Jan. 3.

Many local residents will no doubt be donning their Carolina Panthers jerseys and taking on their game-day routines once more, hoping to see the “home team” make their way to the Super Bowl.