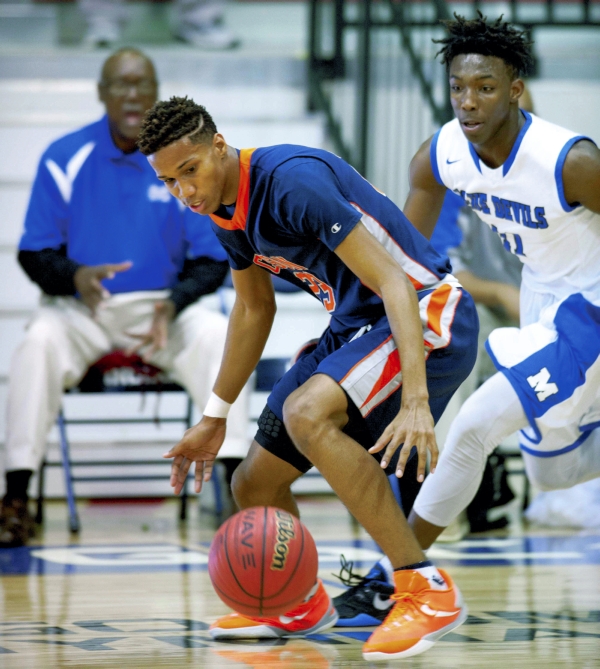 SALISBURY — We don’t know who will win the Dale’s/Sam Moir Christmas Classic boys championship Wednesday night, but we do know who won’t.

Scratch Carson’s name off the list of contenders after the Cougars squandered a 13-point halftime lead and dropped their first-round game with Mooresville.

“We can’t win the tournament,” coach Brian Perry said at Goodman Gym, where Carson missed a shot at the buzzer and lost 58-57. “Now, we just want to win a game.”

Halfway through, Carson (6-5) had fourth-seeded Mooresville right where it wanted it. Carson was playing with energy and purpose and the Blue Devils (7-3) spent much of the first two periods reacting to Carson schemes and riddles.

“Carson was all over us in the first half,” winning coach Michael Micklow said after Mooresville advanced to today’s semifinals. “They were outrebounding us. Their guards were all over the place. I said to them at the break, ‘If you want to play tomorrow night or at 12:30, its got to be your choice. That’s the bottom line.'”

Mooresville responded with two quarters of by-the-book team play. “What we wanted to do was come out in the first three minutes, be aggressive and put our foot down on defense,” Carson sophomore Jamarius Hairston said after scoring a game-high 17 points. But they cut it to seven in the first minute. Then we started taking bad shots and not rebounding. It’s almost like someone flipped a switch and we weren’t playing as a team.”

The Devils had no such problem. Only four Mooresville players scored in the first half. Eight broke through in the second — led by guard Noah Allen’s 10. Former East Rowan star Tay Davis topped all Mooresville scorers with 14 points.

“The problem,” Carson’s Malon Herron-Cuthbertson said, “is we came out in the second half like we had already won the game.”

Herron-Cuthbertson (15 points) beamed in a 3-ball as the third quarter expired, giving Carson a 45-44 lead. But Mooresville opened the final period with a 12-3 run and took a 56-48 edge on Corban Usry’s scoop layup with 3:46 remaining.

“In the first half, everyone was trying to be the hero,” Micklow said after Mooresville won its fifth straight game. “But we’re all-together heroes. When everyone gets involved, when lots of guys touch the basketball, great things will happen for us.”

Carson never regained the lead, but inched as close as 56-55 when Jailen Williams gained the lane and kissed a soft, underhanded shot off the glass and through the net with 1:32 on the clock. A key turnover came 20 seconds later when Hairston was called for traveling for not sticking his dismount on a power drive to the basket. Then with less than a minute to play, Williams was whistled for walking on a call that could have gone either way.

“When they got those calls, I still thought we could win,” Herron-Cuthbertson said. “We needed a stop on defense and another chance to score.”

Carson’s fate was sealed with a miss. The Cougars emerged from a timeout with 5.4 seconds to play, armed with a play designed for Herron-Cuthbertson. But his 3-point attempt from the left side misfired, sending Carson into the losers bracket.

“We had opportunities,” Perry said. “But couldn’t convert in the end. You could point your finger at a lot of different things. They just played a lot better in the second half.”