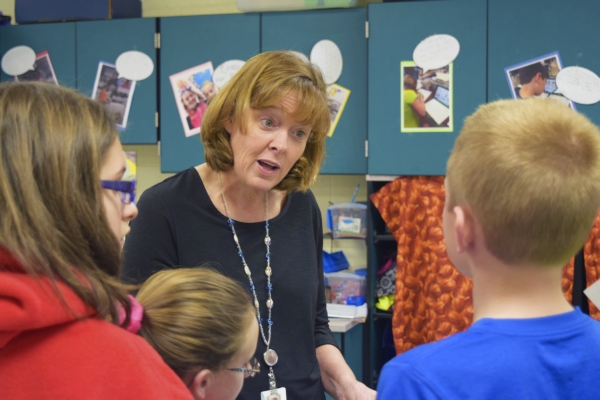 ‘This is a calling’: Teacher of the Year Nancy Goodnight personalizes lessons to help students excel

In Nancy Goodnight’s fifth grade classroom, it’s the week before Christmas break and energies are running high. Her AIG class is hard at work writing Christmas poems for loved ones. Every few minutes, a student will come up and present their poem to Goodnight for feedback. She guides them gently, asking them to think of ways they can vary their rhyming words.

For Nancy Goodnight, being named Teacher of the Year was a chance to take a closer look at what her students needed.

While the award is, in some ways, validation that what she’s doing is beneficial for students, Goodnight is constantly striving to hone her teaching skills — even as a teacher, she never stops learning.

“The day you stop learning is the day you probably need to stop teaching, because it is changing so quickly,” she said.

Since the school system has gone one-to-one, placing an iPad or laptop in the hands of every student and teacher, Goodnight has been able to personalize her students’ lessons to a degree she was never able to before.

“I’ve had technology in my classroom and been afforded the opportunity to use technology for quite a while. But now with the whole system doing it and the whole district doing it, it’s a whole new energy level. We’re all on the same page. We all have access to the same technology, so we’re all pushing each other,” she said.

Technology allows her to personalize instruction for each student, and to provide needed help for students falling behind. It allows her to offer individualized assignments and gives the students a lot of choice on which assignments they want to do or how they want to showcase their learning. Goodnight’s classroom focuses a lot on projects and self-based learning.

“By giving them that choice and giving them the leeway to choose how they learn best, you’re opening up that personalization piece where they can basically decide how best do they want to show mastery of something,” she said.

Goodnight still can’t believe she was nominated for the award. Milbridge has a strong faculty, she says, and there are so many incredible teachers — she doesn’t think she stands out.

“You don’t feel worthy,” she said.

Goodnight is now a finalist for a regional Teacher of the Year award and says she’s tempted to pinch herself, to make sure its real.

When she was a kid, Goodnight says she had an overhead projector and would give lessons to her stuffed animals. Though she arrived late to the game and has only been teaching for ten years, it’s always been a passion of hers.

“This a calling,” she said. “Teaching is a calling. The day that I don’t feel like I want to put the effort in, when I don’t want to give all that I have to it is the day that I probably need to retire because that’s when you’re no longer following a calling and it’s become a job.”

Each year she gets to see a different group of kids grow and excel, and when she sees them leave for middle school, prepared and confident, that’s what makes it worth it.

“As long as you have a passion for it there’s not a better profession in the world,” she said.

By Hugh Fisher hugh.fisher@salisburypost.com KANNAPOLIS — It’s been a long time since downtown Kannapolis was truly bustling. Before the heyday... read more