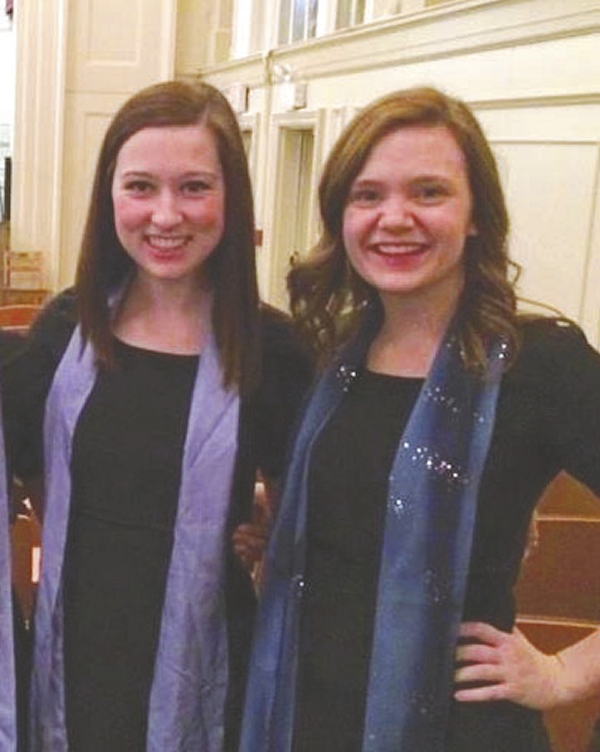 Mocksville natives Savannah Taylor (left) and Kacy Yount (right) will sing in a performance of the Women’s and Men’s Glee Clubs from the UNC-CH.

The Salisbury Elks recently participated in a homeless veteran event hosted by the VA Medical Center in Salisbury. On December 11, approximately 200 homeless veterans gathered at a Christmas party to receive items provided by various groups. The Salisbury Elks donations included gloves, hats, thermal underwear and socks. This is becoming an annual event as well as a Stand Down held in May also for the homeless veterans. The Elks pledge to never forget our veterans is a big part of what Elks do. See Elks.org for more info.

MOCKSVILLE — Mocksville natives Kacy Yount, daughter of David and Janell Yount, and Savannah Taylor, daughter of Joe and Janet Taylor, will sing in a performance of the Women’s and Men’s Glee Clubs from the University of North Carolina at Chapel Hill.

The concert of choral music will be hosted by Oak Grove United Methodist Church on Tuesday, Jan. 5. The concert will be held in the church sanctuary beginning at 7  p.m. There will be no admission charge but a free will offering will be taken to support the Glee Clubs’ tour.

The Glee Clubs, conducted by Dr. Sue T. Klausmeyer and Dr. Daniel M. Huff, are among the oldest organizations at the University of North Carolina at Chapel Hill, and include thousands of alumni as past members. The poetry for the familiar “Hark the Sound,” UNC-Chapel Hill’s well-known alma mater, was written by William Myers, a second tenor from the group and was first performed by the Glee Club in 1897.

Members of the two groups are chosen through audition and represent many states in the East and Southeast United States and a plethora of college majors.

In addition to this tour, the groups perform several times yearly on campus, including two formal concerts, collaborations with other choirs, and performances at local churches and retirement communities. Their 2016 repertoire includes sacred and secular choral works of all periods as well as pop songs, musical theater pieces, ethnic music, spirituals, and a premiere performance of a new work by Men’s Glee Club member Garth Molyneux.

For more information, the local contact is Pastor Sam Lewis of Oak Grove UMC, 336-751-2453 or slewis@wnccumc.net

The Martin Luther King Jr. weekend celebration is scheduled for Jan. 16-18, 2016. The parade will be held Saturday, Jan. 16, with a  new parade route being introduced. We will go up Main Street and cross at Bank Street and end on MLK Jr. Ave. Registration for the parade and vendor participants is open. There is no fee to participate.

On Monday immediately following the breakfast are the ceremonies at the  Freeman’s Cemetery, corner of Liberty and North Church Streets.

To contribute to People & Places, send submissions for consideration to: lifestyles@salisburypost.com  Subject line: People and Places. Deadline: 1 p.m. Wednesday before the Sunday it runs