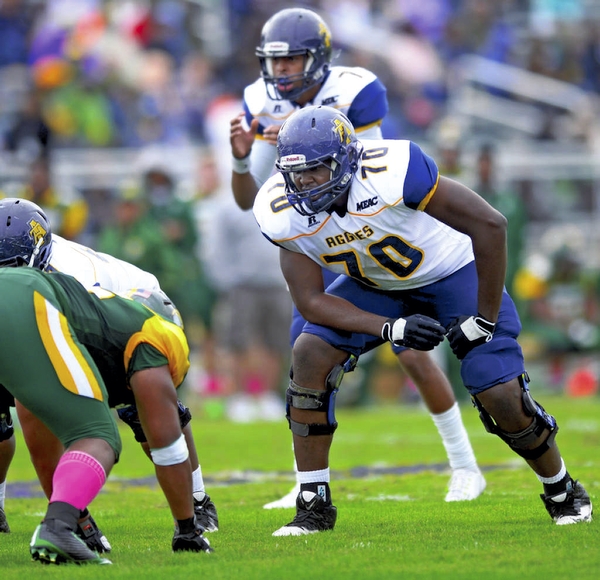 Photo courtesy of N.C. A&T State University ... Brandon Parker (70) is the 6-8, 285-pound left tackle for North Carolina A&T who earned All-America honors as a sophomore. Parker, an A.L. Brown product, was also selected as the Offensive Lineman of the Year for the Mid-Eastern Athletic Conference.

A.L. Brown High head football coach Mike Newsome saw the limitless potential in 6-foot-8 Brandon Parker long ago.
“When we had Brandon, it wasn’t hard to see that he had that God-given height and size and that special wingspan,” said Newsome, who became A.L. Brown’s coach prior to Parker’s junior season. “He was very athletic, but he wasn’t strong, and sometimes it seems like it takes forever for those tall, lanky guys to mature physically. But we knew Brandon would be special once his strength caught up with his body. That’s what we told the colleges that were recruiting him.”
There was interest, but Parker remembers that recruiters weren’t lining up to talk to him.
“There were a few schools — Duke, Appalachian State, Charlotte — that offered me a spot as a preferred walk-on,” Parker said in a phone interview. “UNC offered a partial scholarship. The full offers I had were from Winston-Salem State, North Carolina Central and North Carolina A&T.”
Once a project, Parker has developed into a standout as N.C. A&T’s offensive left tackle. Now he’s a 285-pound sophomore All-American and the Mid-Eastern Athletic Conference Offensive Lineman of the Year.
The bowl season kicks off with Saturday’s Celebration Bowl at noon in Atlanta’s Georgia Dome.
It will be Mid-Eastern Athletic Conference champion N.C. A&T (9-2) against Southwestern Athletic Conference kingpin Alcorn State (9-3), and the winner will be recognized as the champion for Historically Black Colleges and Universities. As of Thursday, 30,000 tickets had been sold.
Parker will be at the forefront of the struggle, as the Aggies take the field for its first bowl game in a dozen years.
“This is a major event,” Parker said. “We’ll be going to the Civil Rights Museum and we’ll be going to dinners, but mostly we’re focused on winning a football championship.”
Parker’s genes are excellent. His father, Curtis Parker, was second team All-ACC in 1992 and 1993. Like his son, Curtis was an offensive tackle. He opened holes that helped Tar Heel tailbacks Natrone Means and Curtis Johnson earn first-team All-ACC honors. Brandon’s mother, Regina, was a prep hoops star at Winston-Salem Carver. Brandon’s older sister, Jasmine, played basketball for N.C. A&T.
But even with solid bloodlines, it took a lot of sweat for Brandon to become a player.
He had a late birthday and didn’t turn 18 until his first year at college was well under way. That was the 2013 season. He was redshirted.
“It was a tough year, but redshirting was necessary,” Parker said. “I’d had great coaching in high school (A.L. Brown offensive line and strength coach Todd Hagler is one of the state’s top assistant coaches) and I was better prepared than most freshmen, but there still was a steep learning curve in front of me in college football. Guys were just throwing me around. I knew I had to get a lot stronger to compete.”
Former A&T offensive line coach Keith Wagner had a lot to do with getting Parker on the right path.
“He helped me physically, he helped me mentally, and he worked with me on attitude changes,” Parker said.
By the time Parker was redshirt freshman in 2014, he’d gained strength, but he was projected to be a backup. When starter William Robinson went down with an injury, Parker moved into the starting lineup. He was third-team All-MEAC.
“I had my weight up to 280 when that season started, but I couldn’t keep it as the season wore on,” Parker said. “I finished the year at 260.”
One of the goals for his sophomore season was staying at 280-285 pounds, and he’s accomplished that. He’s stayed strong, and he’s helped A&T enjoy a special season. This is a program that was 1-10 as recently as 2010. Now the A&T has won back-to-back league championships for coach Rod Broadway, the former UNC defensive lineman. Former Catawba head coach Chip Hester is the Aggies’ offensive coordinator.
The cornerstone of the Aggies’ attack is running back Tarik Cohen, the MEAC Offensive Player of the Year. Parker said it’s been a privilege to block for him.
“I blocked for great players like Kalif Phillips (now a star for the Charlotte 49ers) in high school, and I would never knock any of those guys,” Parker said. “But Tarik is the most special back I’ve played with. We like to say that even if you block it wrong, Tarik can make you right.”
Parker runs a 5.3 40-yard dash — not bad for someone 6-8, 285 — and he bench-presses 325 pounds, not bad for someone with the longest arms on the A&T squad. He has a reach of 107.5 inches.
And he just turned 20 in October, so there’s no doubt he’s going to get stronger and faster.
“You look at the NFL guys, and Brandon has those sort of attributes,” Newsome said. “He’s got the arm-span of a next-level player.”
Parker admits to NFL aspirations, but it’s not something he dwells on.
“I think every college player dreams of the NFL, and I’m no different,” he said. “With more coaching and more strength, it’s possible, but I’m not going to let that distract me. All I’m focused on right now is being the very best college player I can be for North Carolina A&T.”
Parker had some big games, including four pancake blocks in a win against Bethune-Cookman. Accolades have piled up since the regular season ended.
“The last thing you ever expect to happen as an offensive lineman is accolades,” Parker said. “There were no accolades in high school, so it’s all very much appreciated.”
The future will be bright for Parker whether the NFL is part of it or not. He was an outstanding student at A.L. Brown and he majors in electrical engineering at A&T.
“He’s a bright kid, a great person,” Newsome said. “You always pull for a kid like that, and it’s rewarding to see him having so much success.”
•••
NOTES: Former Wonder back Keenan Medley is a sophomore receiver for the Aggies.