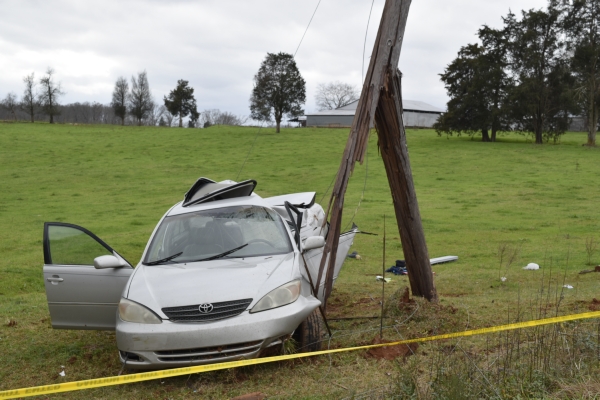 A car traveling eastbound on N.C. Highway 150 hit a telephone pole and cut off power to the area Friday afternoon.

A stretch of N.C. Highway 150 between Airport and Miller roads was closed off for nearly an hour after a car hit a telephone pole Friday.

Danielle Pender was driving westbound with her small child when she says she saw Taylor’s silver-colored vehicle fishtail and go into her lane. She said the car appeared to be speeding.

Taylor overcorrected, Coward said, and ran off the road to the left, where the car hit fenceposts lining a nearby field and came to rest wrapped around a telephone pole, causing a loss of power to the area. While N.C. Highway Patrol did not have an estimate for how fast the car was traveling, Coward said that speed was likely a factor.

Pender pulled over to help.

“I just turned around because I knew it was bad,” she said.

Pender thought the car had flipped a few times, but N.C. Highway Patrol was unable to confirm. Pender said she tried to get both Taylor and Long out of the car, but couldn’t get the doors open. Long, she said, was unconscious at the time. Assistant Chief Bill Hamrick with the Locke Fire Department said that Taylor and Long were trapped in the car for a short period of time. Both were transported to Northeast Medical Center. Their condition is unknown at this time.

As tow trucks cleared away the crumpled car, trucks from Duke Energy arrived to fix the pole, which was snapped nearly in two, and restore power to the area — something that was expected to take several hours, officials said.