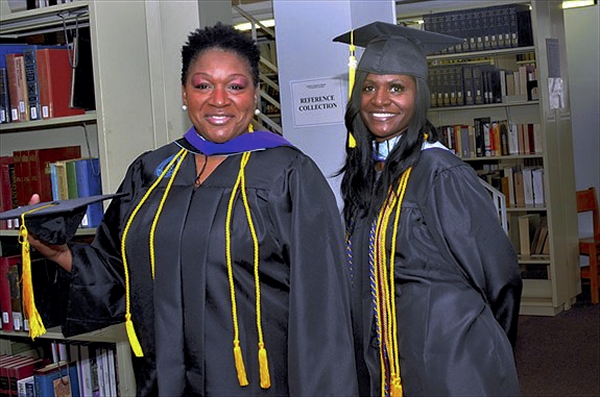 SALISBURY – Winter commencement exercises typically aren’t as noteworthy as May ceremonies: There are fewer graduates, and the event is overshadowed by the impending Christmas holiday.

But for Livingstone graduate Robin Bailey, the institution’s Dec. 11 commencement couldn’t have been more meaningful.

Bailey said she enjoyed Haynes’ speech, though it wouldn’t have mattered to her who spoke. She was just thankful to finally receive her degree.

“I married right out of high school and placed my career aspirations on hold to support the military career of my husband and family,” said Bailey, program assistant at Livingstone. “After my divorce, I returned to school at age 30 with four children and a dream. I started attending UNC Charlotte part-time because I had to work to support my family.”

Bailey attended UNCC from 2001 to 2005 but dropped out after her mother Glenda Miller was diagnosed with breast cancer.

“As an only child with an already full plate, I left school to care for my mom,” Bailey said. “She fought a good fight until she took her last breath on July 13, 2010. A couple of months after the passing of my mother, my maternal grandmother Onnie Williams passed away on Oct. 1. My mother and grandmother made me promise that I would finish my degree, and I had every intention of keeping that promise.”

A few years after losing her mom and grandmother, Bailey started working at Livingstone. A month later she married Timothy Bailey and moved with him to Salisbury.

In August 2014, Bailey enrolled in Livingstone’s Nights and Weekend program under the direction of Carol Pickett. Her son, Timothy II, was just about to turn a year old at the time.

Juggling a full-time job, a young child and school wasn’t easy, but Bailey was determined to succeed – not just because of the promise she’d made to her loved ones but also for herself.

“My motto has always been if it has to be done, ‘no’ is not an option,” Bailey said. “That’s always been my saving grace. My husband and kids were a tremendous help to me during this time. When he couldn’t be at home with our son, I had to call my adult kids. They all helped out, especially my oldest daughter, Onie Miller.”

Bailey’s hard work paid off. She earned a bachelor’s degree in criminal justice and finished with a 3.94 GPA.

“I’ve always tried to practice what I preach, and I’ve always told my children education is important,” Bailey said. “I was determined I was going to get my bachelor’s degree before either of my children got one, and I barely made it because my son, Dejuante Brown, graduates from Winston-Salem State University next May.

“Everybody always talks about what a single mom can’t do, but for most of my journey, I was a single mom,” Bailey continued. “I had to fight off the stigmas people try to put on single moms. I tell my children not to use ‘growing up in a single-parent household’ as an excuse because I worked hard to ensure they had what they needed and to set a good example for them.”

So what’s next for Bailey?

She begins graduate school at Liberty University in January.

As it raises money for an animal shelter expansion, a local animal-shelter-focused nonprofit received a holiday gift this month from Salisbury-based... read more