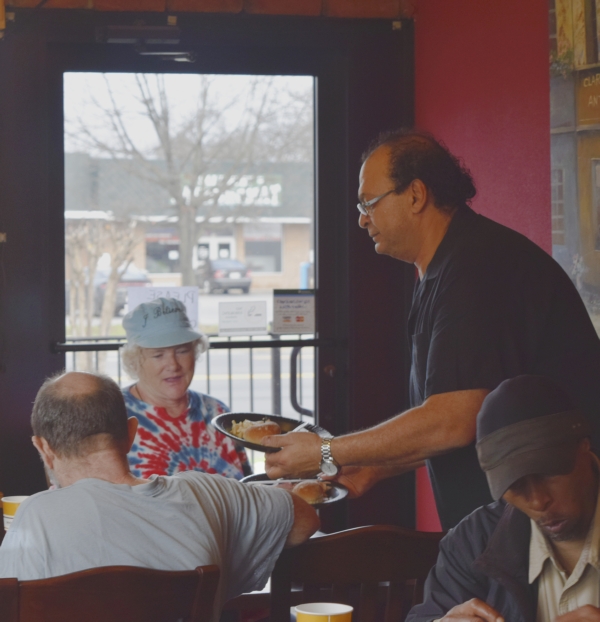 Botros brings a meal to Elliott and her friend, Ralph.

Open hearts and open doors: business seeks to help those in need

It’s Christmas Day, and the door to the HoneyBaked Ham jingles open as two men enter the restaurant. From behind the counter, owner and operator Nader Botros asks if they’re here for the meal. They nod.

Later, he brings out two trays piled with ham, macaroni salad and other goodies. When the food is gone and the customers stand to leave, one of them walks up to the Botros.

It’s the only form of payment Botros will accept.

It’s been a little over a year since the HoneyBaked Ham on East Innes started offering free meals to those in need. Botros said his wife came up with the idea last year during the holidays.

So the restaurant changed its marquee to read, “free meals to the needy.”

“God made us fortunate and gave us a lot,” Botros said. “So why not give back to those who are less fortunate?”

Botros said he and his wife chose to use the word “needy,” because the people who walk through their doors may not be poor, and they may not be homeless, or in need of charity — they just need a good meal. And Botros never asks questions.

“We treat the people like our best customers,” he said. “There’s no differentiation at all.”

It doesn’t matter if a customer drives up in a brand new Mercedes, or comes back multiple times in a single day — they are never turned away, and never asked to prove that they’re in need.

And the move was such a success that Botros decided to continue it throughout the year. On the first Saturday of every month, HoneyBaked Ham throws open its doors and invites anyone who needs a meal to come in and eat.

On Christmas Day, Botros worked by himself, acting as cashier, cook and waiter. His family helped after the doors opened at noon, he explained, but they’d had to leave early. A little more than an hour after he opened, Botros said he’d served 60 free meals.

And the people kept pouring in, from those looking for a free meal, to regular customers to a few who, intrigued by the ad on the marquee, dropped in to show their support.

Mike Jones, Raven Withers and daughter Mia had never been to a HoneyBaked Ham before. They’re from Charlotte, but were in Salisbury for the day, Jones said, and were driving around looking for a grocery store when they saw the marquee.

“We saw the sign that they were supporting the needy,” Jones said, “so we wanted to support their business.”

The family bought their Christmas dinner from Botros before heading home. Botros says that interactions like that are becoming more and more common.

Amy, Cameron and T. Mosley live about two blocks away, and come whenever the free meal is offered. They say that Botros is polite to all his customers and a real conversationalist.

“And the food is on point,” Amy said.

Linda Elliott said she didn’t have any plans for Christmas, so she came here with a friend and her grandson, Jacob.

The three settled at a table to enjoy their meal and chat before going home and doing some things around the house.

Botros says that his business is prospering. He runs two other locations, one in Greenvile, N.C., and one in New Bern. And he hopes to expand further. With his growing business and good health, he feels his family is blessed.

“What more blessing can we ask for?” he wonders.

Offering a free meal to those in need is a way for him to share that blessing, and was a way to express his family’s love and appreciation for the community that’s supported their business for 14 years. For Botros, the “meals for the needy” are “one hundred percent customer satisfaction and one hundred percent profit.”

“It’s a rewarding thing, truly. I’m saying that from my heart,” he said.

HoneyBaked Ham serves a free meal to those in need on the first Saturday of every month from 3 p.m. to 5 p.m.