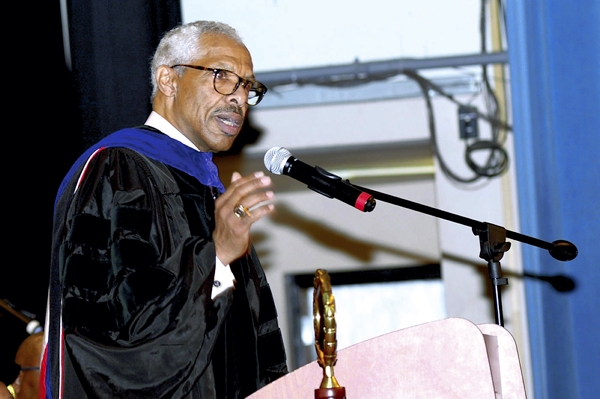 SALISBURY – An official in the U.S. Department of Education challenged Livingstone’s graduates on Dec. 11 to practice what he calls five Fs: focus, finish, follow-up, follow through and faith.

“Too many people lack focus, and when you lack focus you can’t finish what you started,” said Dr. Leonard L. Haynes, III, senior director of the Institutional Service Higher Education Programs in the Department of Education. “You also have to follow-up. So many people finish things but don’t follow up on them.”

“After you follow up, you have to follow through,” Haynes continued. “And finally, you have to have faith that you can do these things. Today, you represent salvation and hope.”

As is customary at graduations, there were shouts of joy, tears and loud applause as the graduates’ names were called. The ceremony began with an invocation by Livingstone’s Campus Minister Troy Russell, followed by the reading of the 23rd Psalm by Rev. Juanita Allen and the singing of “Lift Ev’ry Voice and Sing.” Greetings were brought by Dr. Wyndham Whynot, president of the faculty assembly, and Raven Weathers, president of the Student Government Association.

“Class of 2015, it’s time to recognize that you are somebody,” Weathers said. “God does have a plan for you, and your future is looking brighter and brighter each day.”

Before Haynes spoke, Livingstone senior Tyquan Alston gave a rousing rendition of Marvin Sapp’s hit gospel song, “Never Would Have Made It.”

As he took the podium, Haynes commented on Alston’s performance and jokingly said, “let the church say amen.”

Haynes told the graduates they have a responsibility to “reach back and help the next generation.” Then he asked the parents, children, guardians and friends of the graduates to stand.

“Without you this would not have been,” Haynes said to applause. “You encouraged them, you made sacrifices, you prayed for them and of course you gave them financial support.”

Haynes quoted 1 Cor. 14:8 before saying HBCUs are responsible for graduating over 20 percent of all African-Americans with bachelor’s degrees – yet more must be done.

“Last year, there were only six African-Americans who earned Ph.D.s in physics,” Haynes said before counting to six on his fingers for emphasis. “Can you believe this? The greatest threat to the United States is ignorance… We’re living in a competitive environment today, ladies and gentlemen, and Livingstone has demonstrated through this graduating class that they’re ready to meet the challenge.

“Graduates, you must be role models,” Haynes continued. “You must help those who are behind us to move forward. You’ve got to tell the young people to wake up, to get up, to wise up and to catch up. Livingstone has empowered you to answer the trumpet call… Press on to answer the call. Keep the faith. Run the race and hold on.”

“It should be noted that Dr. Haynes has served under both Republican and Democratic presidents and has stayed the course,” Jenkins said before Dr. Carolyn Wilkerson Duncan, vice president for academic affairs, read to the audience some of Haynes’ accomplishments.

“I am very humbled to receive this recognition because I did not expect this,” Haynes said after the conferral. “I have 13 honorary degrees and this makes No. 14, but because it’s a Blue Bear, this will occupy a special place in my heart and in my home.”

Livingstone also bestowed an honorary Doctor of Humane Letters degree upon Robert “Bob” M. Picerne, who has a bachelor’s degree in organizational behavior from Brown University. Picerne is CEO of Picerne Real Estate Group, Inc., president of Picerne Development Corporation, founder of several Christ-centered non-profits and owner of five Five Guys Burgers and Fries franchises – with plans to expand to 25 restaurants. Picerne and his wife Gwyn have two biological children and have adopted 16 children from several countries, including Russia, Uganda and the United States.

In accepting his degree, Picerne spoke to the graduates about being change agents and also about the power of relationships.

“I implore you to never hold a grudge,” Picerne said. “It’s often said that revenge is a dish best served cold, but I say a plate of bitterness is better left uneaten.”

Several of the Picerne children attended commencement and listened as their father explained that he and his wife never intended to have such a large family. “Man makes his plans, but God directs his path,” he said.

Picerne closed his remarks by quoting part of Romans 15:1-2, which says, “Those of us who are strong and able in the faith need to step in and lend a hand to those who falter, and not just do what is most convenient for us. Strength is for service, not status.”

“We thank Dr. Picerne for that gift,” Jenkins said. “We wanted to honor him today for the great humanitarian work that he’s doing…”

After the ceremony, Jenkins and his wife Dr. Faleese Moore Jenkins hosted a luncheon for Haynes and his wife Mary, the Picerne family and other special guests.