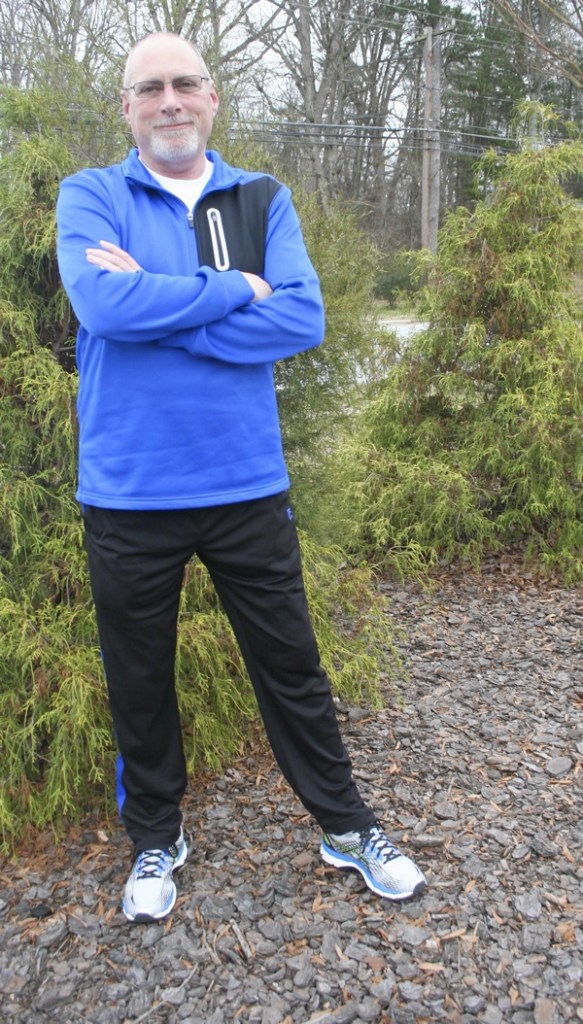 Keith Overcash is prepared to go to rehab therapy at Wake Forest Baptist Medical Center. He is 5 foot 10 and a trim 175 pounds after a heart-kidney transplant in September and walks 3 miles a day. Susan Shinn/For the Salisbury Post

Dr. Barbara Pisani has never had children, but she compares her work to the miracle of birth.

“This is what it’s like at the birth of your child,” she says. “You see 10 fingers, and 10 toes, and the baby is breathing well. A new life has occurred, and it looks like this child is going to live a long and happy life.”

Keith Overcash received the gift of new life on Sept. 1, as he became the first recipient of a heart-kidney transplant at Wake Forest Baptist Medical Center.

Pisani serves as medical director heart failure, cardiac transplantation and mechanical circulatory support. This was not the first time she’d been involved with such a procedure. She praises the efforts of the medical teams who took part in the 18½- hour procedure.

“It went pretty smoothly considering how sick he was,” she says.

She also praises the efforts of Dr. Telly Meadows, Overcash’s cardiologist in Salisbury.

“I don’t think you can get a better Christmas present than a new kidney, a new heart, and a new lease on life,” Pisani says. “Mr. Overcash has changed his lifestyle, he’s served his country, he is spending time with his family, and he’s a genuinely nice guy. He’s got a second chance.”

Overcash, 54, is a China Grove native who would have graduated with the South Rowan High School Class of 1979, had he not quit school.

He went on to get a GED at Rowan-Cabarrus Community College before entering the Army, where he received a dual master’s degree, and served for 26 years.

“It took me awhile to get my head screwed on straight,” he admits, in that slow southern Rowan drawl.

He married wife Pam when she was 15 and he 19. Three years later, they had two children and were living in a foreign country, stationed at Okinawa, Japan.

The Overcashes have two sons, Christopher of Salisbury, a plant manager in Huntersville, and Brandon of Concord, who works with the Charlotte-Mecklenburg Police Department. This past Sunday, they celebrated Christmas with their sons, daughters-in-law, and seven grandchildren — five girls, and two boys. Judging from Overcash’s photographs, there were piles of gifts all over the house.

It was definitely a time to celebrate.

In 1995, Overcash was a drill sergeant at Fort Jackson, working some 110 hours a week — typical for someone in his position, he says.

Understandably, he was tired. But it was a different kind of tired, he says. When he came home to visit his mother, she made him promise to see a doctor.

He had been running every day, and was in great shape. But he only stayed on the treadmill a few minutes during a stress test before doctors pulled him off and put him on a gurney, bound for the V.A. in Columbia for a heart catheterization. In January 1996, doctors discovered he had an enlarged heart.

It didn’t stop him. He ran a marathon, and participated in stock car racing. But he decided to retire in 2006, when he could not pass the Army’s fitness test. He didn’t think it was fair to ask soldiers to do what he couldn’t.

“You lead by example,” he says.

Cardiomyopathy is typically caused by alcoholism. Overcash never drank, but he was a heavy smoker.

By August 2011, he was confined to a wheelchair, but still working for the Department of Veterans Affairs in Winston-Salem. With the commute, the days became too long. The V.A. let him start working from home.

One day, while out in the garage, Overcash experienced what he thought was bad heartburn. He lit up a cigarette.

“I realized real quick I was dying,” he says. His heart was beating some 286 beats a minute, and was out of sync.

“I knew I was dying,” he says. “I asked God to forgive me of my sins, and take care of my wife. I closed my eyes.”

Overcash twice went into cardiac arrest, but a defibrillator shocked his heart twice.

Twenty days later, Overcash and his wife gave up smoking for good.

“At that point, I focused everything I had on getting better,” he says.

He began throwing up every day. Doctors removed his gall bladder, thinking that would help. It didn’t.

He saw Meadows that September.

“You look horrible,” Meadows told him. At that point, Meadows referred Overcash to Wake.

In Winston, Pisani found Overcash was in end-stage heart failure — throwing up is the most common symptom — and put him in ICU.

Ten days later, Overcash went into cardiogenic shock. The chaplain was called, his family brought in. They said their goodbyes.

“We kissed, we loved, we cried,” Overcash says.

That night, a team of surgeons met to discuss how to save him.

They recommended an external heart pump. They didn’t think he’d survive surgery but they didn’t have a choice.

Five days later, Overcash’s left artery sprang a leak, and doctors then had to implant the device internally. Two weeks after that, Overcash was walking a mile and a half in 20 minutes, and was discharged Oct. 17.

“I came off oxygen and out of the wheelchair and I was doing perfect,” Overcash says.

His classmates from the class of 1979 rallied around him. By December 2014, Pam Overcash’s leave with the V.A. was almost up. Employees donated time to her, and his classmates raised money for the couple. Fortunately, the Overcashes have good insurance.

“We didn’t make up for all the lost earnings, but boy, it sure did help,” Overcash says. “And the V.A., God bless them, let Pam work from home, too.”

On April 1, Overcash went on the list for a new heart.

Because of the medications he was taking for his heart, and because of poor blood flow, his kidneys had also begun to fail. Because anti-rejection medicine is notoriously hard on the kidneys, it was determined Overcash would need a new kidney, too.

Although Baptist does heart transplants and is the number-one kidney transplant center in the state, it had never attempted a dual transplant, Pisani says.

Doctors asked if Overcash were OK being the first heart-kidney transplant patient.

“I am,” he told them. “I know you want it to be successful and I know you’ll do all you possibly can.”

He knew he was in bad shape, but his faith was strong, he says.

At 3 a.m. on April 28, the phone rang. They had a heart for Overcash. He and his wife jumped out of bed and drove from their home at High Rock Lake in Denton, arriving at the hospital by 4.

He went straight to the ICU, but his liver enzymes were elevated.

This was not the heart for Overcash.

He spent five days in ICU before being asked to talk with a patient who needed a heart pump, but was afraid to do it. After the two men talked, the patient agreed to go through with the procedure.

“I believe in my heart God put me there for that man,” Overcash says.

On Aug. 31, a second call came. When the Overcashes arrived at the hospital, some 20 nurses were there to meet them.

“It was just a huge celebration,” he says.

Overcash went into surgery around midnight.

He got everything he wanted in the donor heart: the patient was a non-drinker and non-smoker, and very healthy. And she was a female, from somewhere in North Carolina.

He also received the woman’s kidney.

“There have been miracles from God,” Overcash says. “I can’t deny them. Physically, I feel better now than when I retired in 2006.”

There have been challenges.

“You can’t concentrate and you can’t remember things,” he says. “I’m struggling really bad with that.”

It’s a small price to pay.

He had to have a small hernia repair in his chest, which at first devastated him, until he realized what a simple fix it was.

Overcash’s new kidney is “angry,” he says, but the belief is that once they can reduce some of his anti-rejection medicine, it will rebound.

Meadows is pleased with Overcash’s progress.

“It had come to a point we needed more advanced heart care,” Meadows says. “Clinically, despite our best medicine, he was continuing to have a significant number of symptoms. Despite those measures, he continued to decline.”

Meadows has developed a strong working relationship with the team at Baptist, keeping in constant touch on Overcash’s case during the last few months.

“It’s exciting,” Meadows says. “You feel fortunate you can play some small role to get the care he needed to have. We are fortunate to have an academic center close by that offers this level of care. Everyone involved in his case is certainly grateful and happy with how well he has done.”

Overcash is the most grateful of all.

As soon as he was allowed, he wrote a letter to the donor’s family. He hopes they’ll write back after the holidays.

“I told them if I could put their family back together, I’d give this heart right back,” he says. “I wrote how thankful I was that they chose to save my life.”

He’s a lot like a sponge these days, absorbing things he’d never paid attention to before. When his grandchildren opened their gifts last weekend, he was enchanted by their actions and reactions. Where was Grandpa’s elf on the shelf, they wanted to know. Overcash roamed all over the house with them as they searched.

“I’m getting to see and do things I haven’t done for years,” he says. “I’ve never been able to play with my grandchildren at Christmastime.”

When you get a new lease on life, he says, you look at things from a different perspective. He knows his wife is his hero. He treasures the support from his classmates. He’s learned how vital nurses are to health care. Today, he’ll be delivering treats to those nurses at Baptist who are on duty.

And he can’t overemphasize the importance of organ donation.

“I always marked it on my license, but I just never knew how big of a difference it really makes in people’s lives,” he says. “I value this heart. I’m gonna be a good steward as long as I can.”