The Star of Bethlehem: What was it? 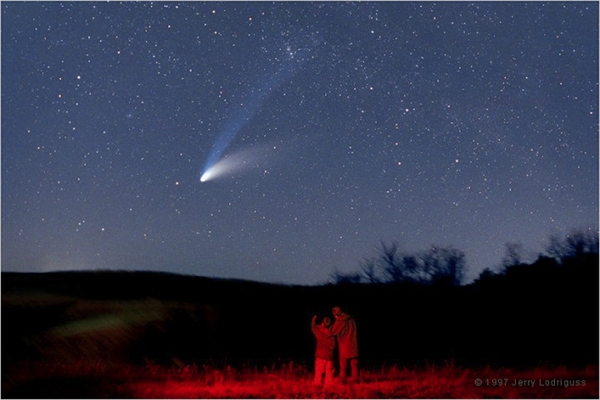 Every year at Christmas time, Christians around the world celebrate the birth of Jesus and retell the well-known elements of the story … the manger in the stable, the shepherds in the field, the Magi from the East … but there is one part of the story that arouses almost universal curiosity. There is one thing that astronomers get asked about every year. That is the Star of Bethlehem. Did it really happen? What could it have been?

The star in the traditional narrative seems to be at odds with science as we understand it today. All the stars in the night sky, even the sun and moon, appear to rotate overhead every 24 hours. We know this is due to the Earth’s daily rotation, and so we wonder how a single star could guide the Magi to Jerusalem.

To figure out what the Star of Bethlehem might have been, there are a number of questions we have to explore. When did the “star” appear? Where did it appear? Who saw it? What did it look like? Answers to these questions might lead us to a possible explanation.

Biblical accounts of the Nativity give us some clues we can use. The Nativity occurred during the reign of Herod the Great. Jerusalem and Bethlehem, a few miles to the south of Jerusalem, are important locations. The Magi saw the star “in the east” and came from the East. We are told that shepherds were in the field with their flocks.

The Gregorian calendar we now use offers us a clue. Around 525 CE, Dionysius Exiguus attempted to establish a count of years from the birth of Jesus. However, in 1605, two errors were found. The year “0” had been skipped, and a four-year period in the reign of Caesar Augustus had been excluded. This places the time of the Nativity around 5 BCE.

Another chronological clue comes from the reign of Herod the Great. He was alive when Jesus was born. He died between a full moon and Passover. Most scholars place the death of Herod between late March and early April of 4 BCE.

We also have clues about the time of year. The traditional date of Dec. 25 was adopted long after the actual Nativity. It is thought that Christians took over the date of a pagan celebration, the Dies Natalis Solis Invicti (the birthday of the invincible Sun). Some traditions associated with the festival, such as decorating with greenery and the giving of gifts, were also adopted as part of Christmas traditions.

The best clue, however, comes from the Nativity narrative in the Bible. Shepherds were described as being in the field with their sheep. This would not have happened in the middle of winter, so the Nativity more likely occurred in the spring of the year.

The criteria we have to meet allow us to rule out some things that are frequently mentioned as being “the” Star of Bethlehem. Venus has been proposed as the star because it is the brightest object (after the sun and moon) in the sky. However, Venus has been observed for thousands of years. Babylonian records of Venus date back to 1700 BCE. Comets, like Hale-Bopp shown here, can be spectacular, but they, too, would be widely observed and were often consider bad omens. Halley’s Comet is often mentioned as a possibility, but its closest appearance had happened in 12 BCE. Meteor showers and meteor storms are also widely observed, and this rules them out. Whatever the star was, it had special meaning for the Magi, but not for the advisors to Herod.

A conjunction of planets, where two or three planets appear close together in the sky, is another possibility, usually as a single event, but there are some problems with this. Only five other planets were known to ancient civilizations, but they had been observed for centuries. Although conjunctions do not occur frequently, they occur in patterns that can be predicted. The repetitive patterns take away any special meaning for a single conjunction.

Another possibility is a series of conjunctions, such as the triple conjunction of Jupiter and Saturn that occurred in 7 BCE. These two planets came close to each other on May 29 that year, then again on Sept. 29 and Dec. 4. All three conjunctions occurred in the constellation Pisces, which was associated with Judaism. This rare sequence would have been noticed by the Magi.

Events that followed would hold their attention. In February of 6 BCE, Mars joined Jupiter and Saturn in the constellation Pisces, as shown in the second image (reproduced from a planetarium program). A year later, there were two other significant conjunctions in the same place, first the moon and Jupiter, then Mars and Saturn. The stage was set for the appearance of what may have been the Star of Bethlehem.

In March of 5 BCE, a nova … a “new star” … appeared between the constellations of Aquila and Capricorn. This nova is noted in both Chinese and Korean records, with enough detail for us to know where it would have been seen in the sky. It was seen “in the east” at dawn, as viewed from Babylon.

The Magi probably came from Babylon or Persia. We know they took weeks to travel, going first to Jerusalem and then on to Bethlehem, to the south. The nova that appeared in March would have been visible for about 70 days. Toward the end of that period, it would be seen at dawn, high in the southern sky … in the direction from Jerusalem to Bethlehem.

Have we found the star?

Maybe we have. We know, with some accuracy, when the Nativity occurred. We have seen a series of planetary conjunctions occurred in a constellation the Magi associated with the Jewish people. We have documented a singular event that could have inspired them to travel to Jerusalem, the central city of the Jews, where they made inquiries in the court of King Herod. And we know this “new star” would then be rightly positioned in the sky to guide the Magi south to Bethlehem.

Is this the final answer to our question? Probably not. Professional astronomer Mark Kidger champions this scenario, but other knowledgeable people, such as Rick Larson and Michael Molnar, defend different ideas. Personally, I find this possibility – a single star, guiding the Magi to Bethlehem – to be the most compelling, by far.

But there is one thing we can be sure of … something very real happened more than 20 centuries ago.