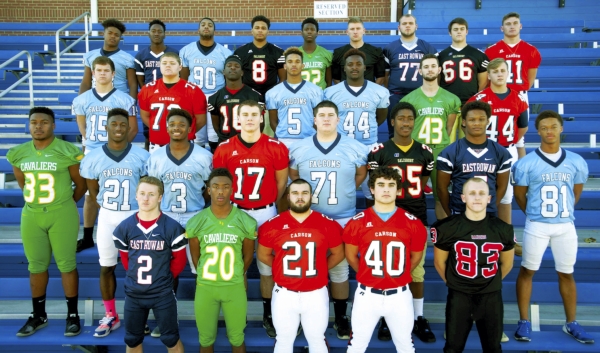 SALISBURY — The ideal All-Rowan County football team is an actual squad — including five offensive linemen and kicking specialists — rather than a parade of backs and pass receivers.

After an all-time record of 37 players from any position, the all-county “team” was trimmed down to 26 players in 2014.

Last year’s 26-man squad covered the basic 22 positions, plus punter, kicker, kick returner and athlete.
Reducing the team was the right thing to do.
Having said that, this year’s team crept back to 30 members.
One addition is a long snapper. Logically, if we salute a punter and kicker, long snappers also deserve their due. It’s an important role. Carson junior Isaac Bell makes history as the first All-Rowan County long snapper.
A second addition is a defensive “athlete.” We had an offensive “athlete” in 2014. That’s become a standard position on every all-star team, even the all-state team.
But we also need an athlete spot on defense. We have many multi-purpose defenders now that can’t be pigeon-holed as DLs, DBs or LBs. Salisbury’s D.J. Alexander is our first defensive athlete. He was a linebacker half the time and a lineman half the time (heck, he even played a little quarterback). Whether he had a hand on the ground or not, he was the most likely Hornet to make a game-changing play.
That brings us to 28 players. The reasons for No. 29 and No. 30? Ties for the fourth defensive line spot and third wide receiver spot. Just too close to call.
Coaches nominated players from their respective teams and they nominated a lot of them. One helpful coach offered positive commentary on athletes he coached against.
Some coaches provided detailed information on every nominee. Some posted stats online. Some provided a list of nominees with no embellishment.
The Post picked the team. The team’s not perfect. It never is.
In a perfect world, each school would have an all-county player for every win. North won five and has four all-county players. Carson won seven and has six. They probably deserved one more.
West won 10 and has 10 all-county players. South won zero, but South’s kicker isn’t out of place on the AP All-State ballot and South’s punter is an All-American. Those two were the easiest two.
Salisbury and East won three games each and have four all-county players each. Maybe they got one extra, but when you look at those eight guys, it’s hard to delete anyone.
Positions are a factor. Some fine players got squeezed out. There were three linebacker spots. Carson’s best two players were linebackers. That didn’t leave much room for the rest of the county.
There was an overload of worthy defensive players. That makes sense. My impression watching them play was that Carson, North, Salisbury and East were better on defense than offense.
You could make a case for nine different guys as all-county DBs.
That’s one reason we’re listing a second team, acting on a suggestion by North coach Ben Hampton.
Yes, we realize it’s not the same as being in the all-county picture. Still, it’s a bit of recognition for a job well done. Everyone on the second team played hard and played well. Many of them are young. Hopefully, they’ll use a second-team nod as a springboard to first-team honors in 2016.
The Post’s players of the year — Kacey Otto and Ryan Bearden — were not all-county as juniors. More proof that almost anything is possible.

Sixth in a series of seven all-county high school teams. Football’s team will be published tomorrow, on Christmas Day. By... read more