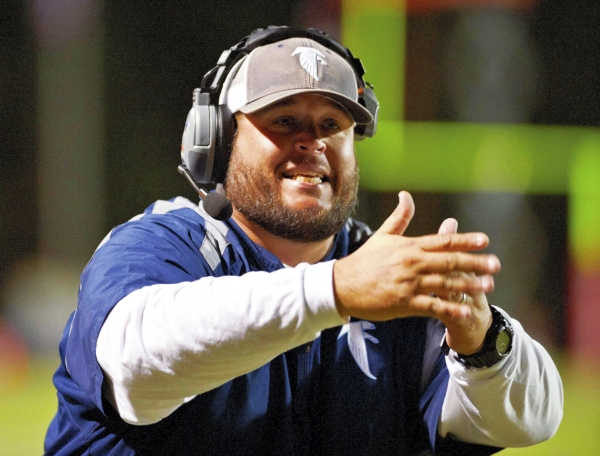 JON C. LAKEY / SALISBURY POST ... West Rowan’s Joe Nixon, Rowan County Coach of the Year for 2015. Nixon, in his first year at West, is shown above during the Falcons’ Thursday night game at East Rowan on Oct. 15. West won the game, 28-7.

SALISBURY — Good players and good assistants make good head coaches.
Everyone knows it.
Every head coach who’s ever been selected by the Salisbury Post as Rowan County Coach of the Year has strived mightily to disperse that accolade to all the folks around him and under him.
Former West Rowan head coach and current volunteer coach Scott Young was the all-time master at deflecting coach-of-the-year praise. He got to do it nine times, and practice makes perfect.
Now West Rowan’s first-year head coach Joe Nixon gets to spread around the praise for the second time. Nixon was the award-winner at North Rowan in 2013, so the former Catawba lineman is now a two-time honoree. Two out of three years and at two different schools — that’s not bad.
The competition for Nixon was that other Joe — Carson’s Joe Pinyan. Carson was expected to win three or four games. The Cougars won seven, so Pinyan (a three-time coach of the year), his assistants and his players did a fine job.
West was expected to be good and lived up to the hype.
The Falcons (10-4) weren’t conference champions, but they were county champions. They had to beat Carson, Rowan’s second-best team, twice in order to say that, but they managed to do it. The first one, with both teams missing key players, was routine. The second one … well, people will talk about the rematch for the next 10 years. Playoff game. Packed house. Overtime and 28-27.
“You look back on our season and we won 10 games,” Nixon said. “We played after Thanksgiving. That’s a great year for our kids. We had a great group of seniors. They led us the right way.”
Nixon is conservative by nature. West QB Kacey Otto, the county’s offensive player of the year, had fewer than 10 passing attempts in five different games — all easy victories. But when the Falcons needed to throw it, they threw it well. West had major weapons in receivers Kortez Weeks and Juwan Houston, and Nixon made good use of their elusiveness.
The Falcons turned in an unusual 10-win season. This West team wasn’t like the state-championship machines we saw in 2008-10 when Nixon was Young’s offensive coordinator.
This West team fought from behind as much as it played from in front.
West trailed Davie, 14-0, in the second quarter — and won.
West was down twice in a dogfight at Robinson — and won.
West trailed South Rowan, 6-0, in the second quarter — and won.
West trailed at Central Cabarrus, 14-0, in the second quarter — and won.
West trailed Carson, 21-7, at halftime in that epic playoff game — and won.
It won’t be easy for Nixon to avoid credit for all those comebacks. West rallied for half of its victories. When you’re down 14-0, it’s easy to pout and point fingers. The Falcons never panicked. They kept grinding.
West scored five special-teams touchdowns and six defensive touchdowns. That helped.
“We were down in a lot of games, but we found different ways to win a lot of those games,” Nixon said. “We faced a lot of adversity and overcame it.”
The Falcons dealt with injuries. Running back Jovon Quarles was hobbled for a while. Derrick Moreland, a dominant defensive lineman, went down for the season with a knee injury. His replacement (Tyler Wheeler) performed well, but West fans will always wonder what might have been if Moreland had been available for the playoffs.
West’s best comeback ended in heartbreak. That was the 28-27 loss at South Point in the third round of the 3A playoffs.
Down 28-14 in the fourth quarter, the Falcons made it 28-21 on Otto’s TD pass to Houston with 6:36 remaining. When Otto hit Weeks with a TD pass in the final seconds, it was 28-27. The Falcons went for the two-point conversion and the win, but a pass fell incomplete.
“That was a scenario we’d prepared for all week,” Nixon said. “We’d talked about it. We’d practiced it. We knew if we were in that situation, we’d go for two. Our kids tried, but we didn’t make it. I wish like crazy that we had made it, but it just didn’t work out.”
South Point dismantled Kings Mountain in the regional final a week later and wound up losing in overtime to Rocky Mount in the 3A state championship game. So the Falcons weren’t far away from being a state-championship-level team.
That’ll be the goal for next season, to keep moving forward. The last three seasons West has climbed from six wins to eight and now to 10.
The job Nixon did this year impressed foes as well as friends.
“He did a good job taking over a program already steeped in tradition and continued their successes without missing a beat,” said East Rowan coach Kenneth McClamrock, the 2014 Rowan County Coach of the Year. “It’s tough to replace a coach as revered as Coach Young, but Coach Nixon has the personality that enables him to do so.”