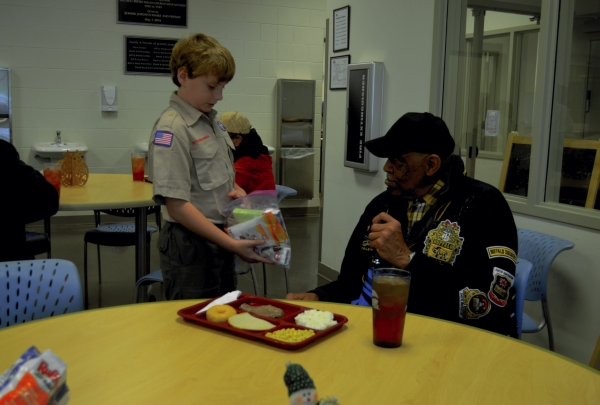 Cub Scout Reid Vanpelt, 10, gives a "Blessing Bag" to Ernest Fortune, who regularly stops by the Rowan Helping Ministries kitchen to have a meal with the shelter guests. Vanpelt is one of a group of Cub Scouts from Pack 524 out of Bethpage United Methodist Church who helped create the bags for shelter guests and volunteers. The boys, along with their Scout Master Darrin Jordan, parents and other volunteers delivered the bags Wednesday. Shavonne Walker/Salisbury Post

It took a group of 35 Cub Scouts three months to collect toiletry items for a group of people they didn’t even know.

Pack 254, chartered out of Bethpage United Methodist Church, took on the notion of being a blessing to others by creating “Blessing Bags” for the guests and clients of Rowan Helping Ministries. The boys, their parents and Scout leaders collected enough items for 205 bags.

Scout leader Darrin Jordan, a local attorney, said he was on Facebook when he read about the “Blessing Bags.” The Scouts in the past organized canned food drives for the shelter, and Jordan said he thought the bags were a neat idea.

“The kids had a blast. We got everything collected and assembled the bags,” he said.

He gave the children a list of appropriate items including toothpaste, razors, washcloths, hats, notebooks and pens.

The group stopped by the kitchen Wednesday where they gave out about 80 bags. The Scouts were encouraged to take the rest of the bags, place them in their parents’ vehicles and give them to someone who may be homeless.

The Scouts try to participate in a community service project each year, Jordan said, and this was one of them.

Reid Vanpelt, 10, said being able to meet the people at the shelter was a good experience.

“Sometimes a person needs a second chance,” he said.

Vanpelt said he introduced himself and was able to talk with a shelter guest, who said he’d also been in the Boy Scouts as a young boy.

The two talked about how the organization has changed over the years and the projects the children participate in today.

Lachlan Jackling, 9, said it was important for him to be able to help other people and good for him to “be a good person when you grow up.”

Noah Stowe, 10, enjoyed meeting other people at the shelter.

“It’s good to be able to help all of the people and experience new things and meet new people. It’s good because we can make a difference for them,” Stowe said.

Luke Thompson, 10, said he felt it was a good experience for him to spend time with the people who stay at the shelter and to “make them feel happy.”

There were a lot of smiles from shelter guests, volunteers and staff as the Scouts approached one person after another. Ronald Ransbottom is one of those shelter guests who received a Blessing Bag.

He jokingly told one Scout he’d be a fine Marine someday. The Marine Corps veteran said he’s had a hard time dealing with the death of his twin brother, and the Scouts brought a smile to his face.

Ransbottom said he felt blessed because “God wakes me up every day.”

“I’m appreciative for what I have,” he said.

Amy Goodell, who has been a resident of the shelter for seven months, said it’s wonderful to see the Scouts are starting out young learning to give back to the community.

Albert Shelton used to be a Boy Scout and said its an amazing organization that influences children in a positive way early in life. Growing up in his community, there weren’t a lot of positive influences for African American males.

“Kids today don’t have guidance. The Boy Scouts has a positive impact on our community and our nation,” Shelton said.