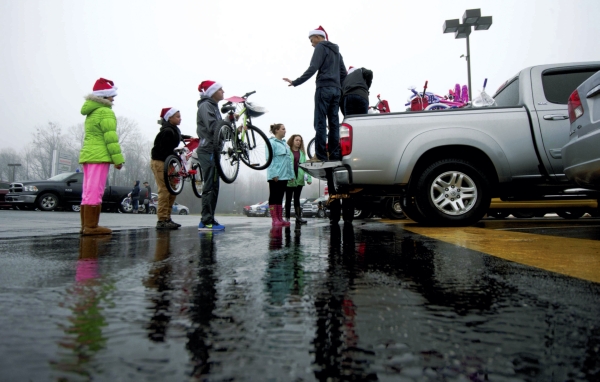 The Salisbury Police department and Gerry Wood Auto group again joined forces to bring smiles to the faces of some Salisbury children on Tuesday, delivering bicycles across the city. Jon C. Lakey/Salisbury Post

Allison Martin’s children, Alex and Khai, were so excited they couldn’t contain themselves the day before, but Salisbury Police officers saw two shy and subdued children who came to the door to receive bicycles from them Tuesday morning.

The children were two out of 140 who received bicycles through the agency’s annual bike giveaway. The bicycles are purchased by Gerry Wood Auto Group, and parents undergo an application process with the Salisbury Police Department.

Eligible children are then selected to receive a bicycle delivered by the officers, in some cases the officer’s family, and other volunteers.

“They have been excited waiting,” Martin said of her 7-year-old and 5-year-old.

Martin said her family was grateful to the police department and Gerry Wood for their gifts because it has been a difficult year for her family. She did not elaborate, but was very thankful for the kindness shown to her children.

“This is an opportunity for at-risk children to associate police officers with something positive,” said Brenda Wood.

She commended the police department, police cadets and others who volunteered, many on their day off, to help distribute the bicycles.

“The turnout from the police department is greater in number than it has ever been,” Wood said.

The youngest Miller said she enjoyed helping children who may not have a bicycle to get one for the holidays.

She’s volunteered the last four years alongside her father and grandfather.

“The reward is giving to the kids and seeing the smiles on their faces,” Joe Miller said.

“It’s just something rewarding that makes you feel good inside. The kids are special, and they need to know that,” Carl Miller said.

Dylan Auten, 18, participated as a volunteer for the first time this year alongside college roommate and friend Chase Thompson, whose mother Melonie Thompson is a police captain.

Auten said he was invited to participate and he thought it sounded like a good idea to help the children. He was able to see many smiles and saw a few of the children ride their bikes despite the wet conditions

Last year, the police department and Gerry Wood were able to provide bikes to 130 children and the year before 125, said Police Officer Annice Chunn, whose children also helped deliver bikes.

Chunn said every year the number of children they are able to help increases.

She gathers the applications, then enters names, addresses and telephone numbers for each child who receives a bike into a database. Once she has an application, other officers help her verify the information and even will visit with the families beforehand. It’s time consuming, and she has to be meticulous during the application process.

“When this day comes, it makes it all worth it,” Chunn said. “It’s Christmas for me today.”