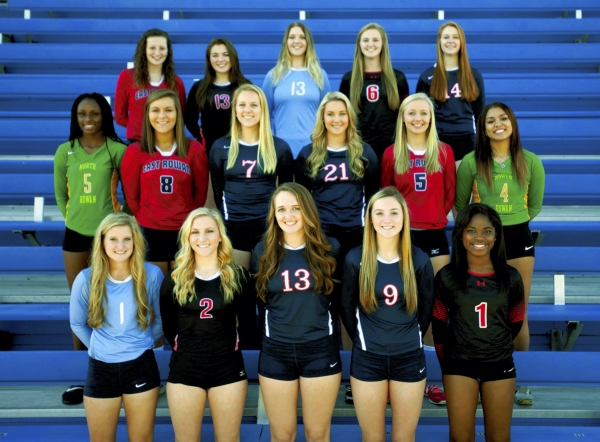 Fifth in a series of seven all-county teams. Boys soccer will be published on Thursday and football follows on Christmas Day.

SALISBURY — Carson High School’s volleyball team went 28-3, took 85 of 97 sets, shared the South Piedmont Conference championship, won the SPC tournament and reached the fourth round of the 3A state playoffs.
SPC co-champs Carson and Cox Mill probably were among the best five squads in 3A. Carson handed Cox Mill its first two losses of the season in a six-day span in mid-October. Cox Mill’s only other setback was to state champ South Iredell, 3-1.
Carson did what it did with strong coaching — Kelan Rogers obviously is the Rowan County Coach of the Year — and a perfect-storm committee of players.
Morgan Hester (5-foot-6), Mallory Weast (5-6) and Jordan Osborne (5-7) scared no one when they took the floor, but they combined with Elena Turnbull (5-10), Lindsay Elmore (6-1) and a rotating cast of guest-stars — hitters McKenna Moose and Madison Barnhardt, diggers Sarah Boyd and Kristen Cauble, and setter Kaytee Leonguerrero, to destroy opponents.
Seniors Hester and Osborne, junior Turnbull, sophomore Elmore and freshman Weast are easy all-county picks. Hester led the Cougars in assists and aces. Osborne led in digs. Turnbull led in kill percentage (almost 55 percent). Weast has a startling vertical leap and led the team in kills. Elmore led in blocks.
Weast, Turnbull and Elmore all topped 200 kills.
Asked for his opinion on who should be county player of the year, Rogers threw up his hands like he was going for a block.
“Hester,” he said. “Or Osborne. Or Turnbull. It should be someone from our team.”
There wasn’t any doubt about that. No one else in the county won a playoff match. The county’s only other winning overall record was produced by East Rowan (14-10), and the Mustangs dropped nine straight sets to the Cougars.
Hester is the Salisbury Post’s pick as the Rowan County Player of the Year. The Catawba signee not only led the Cougars in assists and aces, she was second in blocks, third in digs and serve-receive and fifth in kills.
Opposing coaches endorsed Hester as the glue person for the Cougars and their MVP. Carson will still be good, but it will be different next year without Hester to lean on.
Carson was only 17-10 in 2014, but a lot changed. Weast was added to the mix. Elmore developed into a dominant middle hitter. Turnbull was healthier and her return to full throttle, along with the arrival of Weast, allowed Osborne to move to libero, her best position.
The constant was Hester, who just kept doing everything that can be done on a volleyball court at a consistently high level. She was primarily the setter, but she also spent time as a hitter, with Leonguerrero setting.
•••
East, South, Salisbury and North qualified for the state playoffs.
East, Rowan’s second-best team, placed three players on the all-county squad. Senior Brittany Small’s jumping ability makes her a major presence in volleyball as well as track and basketball. Junior Jordan McCall is an acrobatic setter, team leader and future college player. Senior Avery Wright made the clutch plays at the end of a lot of East wins.
South Rowan (11-12) split with East and had standouts in 5-1 libero Abby Fields and 5-8 setter Kylie Labbe.
Salisbury has a very strong player in 5-foot-11 middle hitter Juliana Anderson, a junior who already has earned many accolades, including 2014 Rowan County Player of the Year. Anderson does it all. She kills, blocks, serves and digs. Even with the Hornets tumbling to 9-19 after last season’s Central Carolina Conference championship, she repeated as CCC Player of the Year.
Also representing Salisbury on the all-county team is senior setter Lora Withers. Quiet and steady, she helped Anderson get a lot of kills.
North Rowan had two of the county’s top 10 players.
Makala Lytton missed almost all of her junior season with a torn ACL, but she made a great comeback as a senior. She led the Cavaliers (9-15) in aces, digs and serve-receive and was second in kills. She was runner-up in the CCC Player of the Year voting. Lytton is only 5-6, but she’s athletic enough and tough enough to play in college.
Senior Aliyah Farmer is best known for basketball, but the 5-8 jumping jack’s quickness and spring also make her a force on the volleyball court. She led the Cavaliers in kills.
West Rowan was only 6-17, but was a much more competitive team. Taylor Martin, a 5-foot senior who will play softball at Catawba, led the SPC in digs and was an easy choice for all-county. Hannah Moseley, a 6-foot senior, led the Falcons in kills and was very strong late in the season.
Repeating from last season’s team are Hester, Osborne, Turnbull, Anderson, McCall, Small, Labbe and Farmer.

SALISBURY — Carson senior Zachary Marchinko accomplished amazing things as a senior and is an easy choice as the Post’s... read more