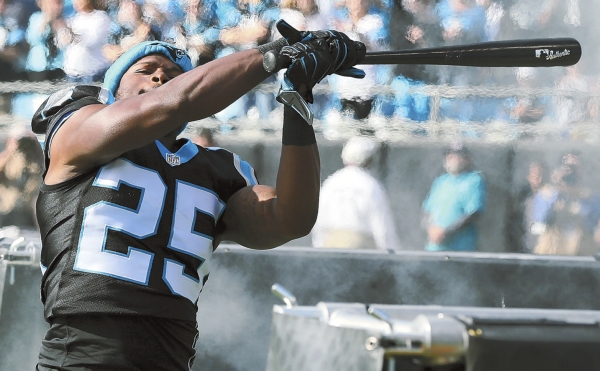 Curtis Compton/Atlanta Journal-Constitution via AP In this photo taken Dec. 13, Panthers defender Bene Benwikere swings a bat as he takes the field to play the Atlanta Falcons in the game in Charlotte, won by the Panthers, 38-0. The Panthers deny that any member of the team taunted New York Giants wide receiver Odell Beckham Jr. with a baseball bat before last Sunday’s game,

CHARLOTTE (AP) — At the end of the day a frustrated Ron Rivera didn’t have a choice whether Carolina players could continue to bring baseball bats on the field before games.

The NFL made sure Tuesday that Rivera and other coaches were clear on the rules.

League spokesman Greg Aiello said in an email to The Associated Press that the NFL sent a memo all 32 teams reminding them that “no foreign objects unrelated to the uniform or playing equipment are permitted on the playing field and sidelines on game day (which includes the pre-game period, during the game, and postgame on the field).”

The Panthers baseball bat, which they say is a motivational prop, has garnered much attention in the fallout after the Panthers-New York Giants game on Sunday due mainly to incidents involving wide receiver Odell Beckham Jr. and Panthers cornerback Josh Norman.

Rivera said earlier Tuesday that the Panthers had not done anything wrong and was asked if that was the case, why he made the decision. The coach said, “because I’m going to hear it if I don’t. That’s the truth of the matter,

“So to avoid the situation and set of circumstances, let’s just eliminate it. So that’s what we’re going to do. Again, it’s the No Fun League for a reason.”

Rivera didn’t say if he had received a league memo, which also stated, “While we realize that teams and individual players may have items they use for motivation or to symbolize a theme that the team has used this season, we ask that you instruct your club personnel and players to leave those items in the locker room. For the purposes of this policy, ‘foreign objects’ broadly encompasses any item that is neither intrinsic to the game nor necessary to conduct pregame drills and treat and prepare players for the game.”

One thing the Panthers fifth-year coach did make clear was being upset about what he said were untrue reports that some players taunted Beckham with physical threats and homophobic slurs before Sunday’s game.

Rivera said the Panthers wouldn’t stand for that kind of behavior and the team found no evidence it occurred.

Neither the Giants nor Beckham have released any statements accusing the Panthers of taunting the wide receiver before the game with physical harm or homophobic slurs. Rivera said homophobic slurs are an important social issue and he doesn’t take them lightly.

“If there is something out there that is factual, that there is truth or hard evidence, please present it to us as well so we can act accordingly,” Rivera said. “We don’t tolerate that here. We don’t. If there is some truth to it we will react to it and handle it appropriately. Until there is, there’s nothing for me to do.”

None of the Panthers questioned about the incident addressed the issue in the open locker room session, which came before Rivera’s press conference.

The coach said the baseball bat represents the team having a home run mentality when it comes to making big plays.

Rivera spoke to practice squad player Marcus Ball, who was seen carrying the bat before the game, but the defensive back denied any of the accusations.

“I’ve seen some of the clips but honestly they are benign,” Rivera said.

The Panthers are 14-0 on the season and five wins away from completing an unbeaten season. They can wrap up the No. 1 seed in the NFC this Sunday with a win or tie against the Atlanta Falcons.

By Mike London mike.london@salisburypost.com Fifth in a series of seven all-county teams. Boys soccer will be published on Thursday and... read more