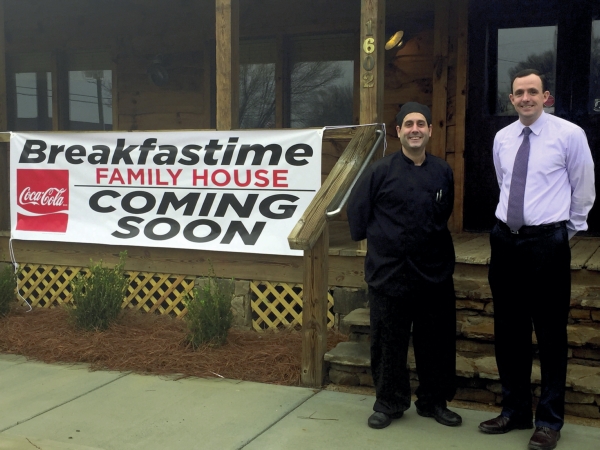 Breakfastime Family House will be moving into the previous Farmhouse Restaurant location at the corner of Old Concord Road and Jake Alexander Boulevard.

The Farmhouse Restaurant closed in October of 2014 after more than two decades of business. Cannon Pharmacy purchased the property.

At first, Cannon Pharmacy had plans to build a new pharmacy on the property. But after negative feedback from the community, Brian Freeman, owner of Cannon Pharmacy, decided to go in a different direction and move another tenant into the building.

Freeman said he had offers from nightclubs and bars, but he wanted a tenant that would better reflect Cannon Pharmacy’s values.

Alexander Kazakos, owner of the Breakfastime restaurants, said a customer told him about the available space.

“I wasn’t even marketing yet,” Freeman said.

After setting up a meeting with Freeman, Kazakos said he felt like they had a deal after 10 minutes.

“He said everything I wanted to hear and I agreed upon everything he wanted, and we were just golden from there,” Kazakos said.

Kazakos said he is excited about the Salisbury location. He said he always wanted to move into Salisbury, and was actually looking at another location before the former Farmhouse became available.

“It’s good for me to have Concord and Salisbury, and the other side of Concord, because I can multi-manage and pull from locations and be able to watch it,” he said.

Breakfastime has two open locations – one in Winston Salem and one in Concord. Besides the new Salisbury location, there is another location opening in Concord and three more locations opening in the future.

The restaurant is open for breakfast and lunch. It serves all of the breakfast favorites – scrambled eggs, omelets, pancakes, hash browns, French toast and fresh fruit.

Kazakos said he makes all of his dishes from scratch with fresh ingredients.

One thing Kazakos said he gets compliments on is his fruit platter, which includes kiwi, strawberries, blueberries and a fresh banana right on top.

Another customer favorite is the free egg that comes with breakfast dishes, an idea that first started with Kazakos’ father.

“Nobody gives a free egg. I give them a free egg, no problem,” he said.

The Salisbury location will be opening in mid-February. Kazakos said there will be some current employees who will move to the new restaurant, but there will be at least 80 positions to be filled, including 30 to 35 servers.

And Kazakos is a strict boss. He is a graduate of Johnson & Wales University with a degree in culinary arts. He worked with his father, who owns the Captain’s Galley Seafood restaurant franchise, before opening Breakfastime with his father in 2008. Having been a chef for 11 years, Kazakos said he knows what works and what doesn’t.

Kazakos has specific recipes for all of his menu items.

“There’s a technique for everything. And it has to be my way or it’s not going to work,” he said.

Kazakos said he cleans the restaurant from top to bottom every day and every employee who handles food wears gloves, even the server putting the bread on the table.

The new location will have the same vintage, rustic décor as the other restaurants, which includes old signs and milk jugs.

Scott Hellems and his crew have been working to refurbish the property, which now has asphalt laid down for the parking lot and a new walkway, roof and interior wood floor.

Freeman and Kazakos agreed that the partnership is a match made in heaven.

“I really could not have dreamed of a better tenant or a better relationship,” Freeman said. “I am so blessed.”

Kazakos said once the “Now accepting applications” sign goes up on the property, individuals will be able to pick up and fill out applications at the Salisbury location.