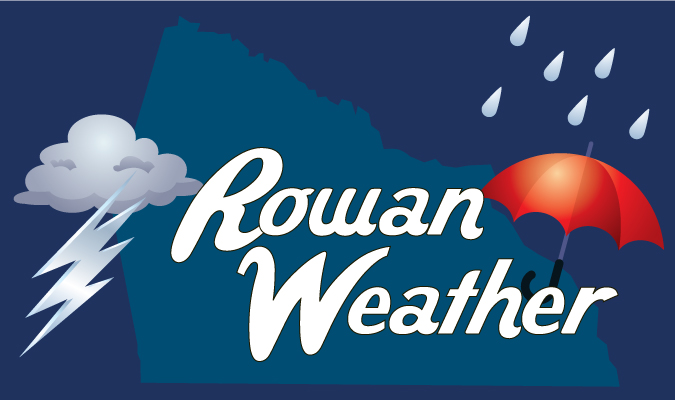 THE NATIONAL WEATHER SERVICE HAS ISSUED A REGIONAL FLASH FLOOD WATCH INCLUDING ROWAN COUNTY FROM MIDNIGHT TONIGHT THROUGH THURSDAY EVENING.

ABUNDANT MOISTURE FROM THE EXISTING RAIN SYSTEM WILL SURGE NORTHWARD ACROSS THE REGION OVERNIGHT AND PERSIST OVER THE AREA THROUGH THURSDAY AS A COLD FRONT APPROACHES SLOWLY FROM THE WEST. MUCH OF THE REGION HAS ALREADY EXPERIENCED HEAVY RAINFALL IN THE PAST 24 HOURS…AND SOIL CONDITIONS ARE VERY WET AHEAD OF THIS
APPROACHING EVENT. RAINFALL TOTALS COULD REACH 2 TO 4 INCHES AFFECTING MANY OTHER LOCATIONS AROUND THE REGION.

FLASH FLOODING COULD DEVELOP QUICKLY OVERNIGHT AS THE HEAVY RAIN SHOWERS MOVE IN FROM THE SOUTH. LONGER DURATION STREAM…CREEK…AND MAIN STEM RIVER FLOODING MAY THEN DEVELOP WEDNESDAY THROUGH THURSDAY.

You probably woke up to the sound of torrential rain this morning. Radar indicates the heaviest rain is east of us now, but we can expect a shower or two this morning.

The high will be 62. Showers are likely before midnight, then showers and a possible thunderstorm are likely until 4 a.m., followed by more showers. The low will be 58. Another half to three-quarters of an inch of rain is possible.

The heavy rain tonight could lead to flooding, and a flood watch may be issued later today.

Wednesday has a 90 percent chance of showers, with thunderstorms possible after 1 p.m. Patchy fog is likely in the morning. The high will be 69, with south wind at 10-13 mph and gusts up to 21 mph. Three-quarters to an inch of rain is possible, as well as some flooding.

The chance of rain for Wednesday night goes down to 80 percent, with a thunderstorm possible, as well. The low will be 63, with more south wind around 11 mph, gusting to 20 mph. Up to half an inch more rain is possible.

Christmas Eve has a 40 percent chance of showers and thunderstorms and it’s going to be almost hot, with a high of 75. Winds will blow at 10 mph from the south southwest, with gusts up to 18 mph.

The 40 percent chance of showers and storms continues Thursday night, with a low of 60.

At this point, Christmas Day will be mostly cloudy and warm, with a high of 72. It will be warm enough for the kids to play outside, but it’s probably going to be muddy. The low will be 55.

Then a 30 percent chance of showers comes in Monday, with more clouds and a high of 65.