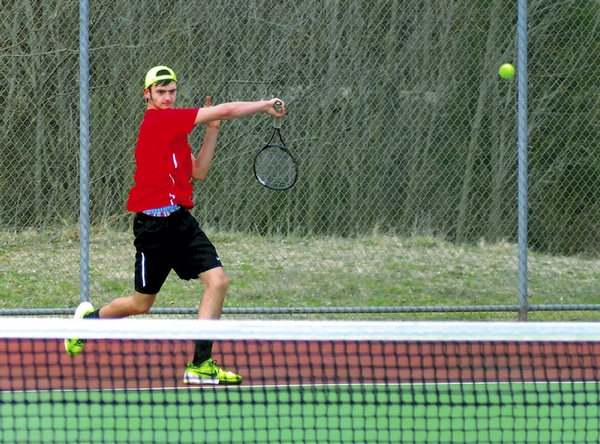 SALISBURY — In the hallway at Salisbury High School, senior Hunter Carlton stands out.
For one thing, he’s the only student wearing University of Kentucky gear.
For another thing, he’s 6-foot-7.
Carlton looks like he should be in the basketball gym trading elbows and dunks with Tre Oats, D.J. Alexander and Wes Fazia, but he’s a tennis player — and a good one.
Carlton’s ceiling is high. He signed recently with Mars Hill, one of Catawba’s competitors in the Division II South Atlantic Conference.
What’s the biggest advantage of being 6-7 on the tennis court?
“Intimidation,” Salisbury coach Milton Griffith said. “Hunter has a powerful serve. He’s really good at the net and he can cover a lot of the court. He’s a strong, all-round player.”
And the disadvantage of being 6-7?
“Speed,” Griffith said.
Speed is one of the things Carlton works on year-round. Along the way, there have been all-day workouts at the Randy Pate Tennis Academy in Winston-Salem, local lessons from former Catawba star Bobby Cristman and sessions at the Performance Tennis Academy in Concord with Jack Thompson.
The secret to success for extra-tall players such as Carlton is making their rocketing, downhill serves and wide wingspans compensate for what they’re giving up in mobility and agility.
“Tennis is year-round for me now,” Carlton said. “I’ve played in a lot of tournaments. I’ve been able to move into the top 50 in North Carolina in the USTA rankings.”
There was a time not long ago when a 6-7 kid would’ve been viewed as too tall to excel on a tennis court, but the world’s best players are getting steadily taller. The highest-ranked American player, John Isner, stands a towering 6-10.
Carlton didn’t know right away that tennis was his game. As an eighth-grader at Southeast Middle School his main interest was golf, but the school didn’t have a team.
“I remember coming home and telling my dad that maybe I could try tennis,” Carlton said. “I thought it would be good to at least learn how to play the game.”
By his freshman year at Salisbury, Carlton was good enough to earn the No. 6 singles spot at a school that has no shortage of tennis tradition. That was in the spring of 2013.
“I won a challenge match for that No. 6 spot — in three sets,” Carlton said.
As a sophomore in 2014, it got even tougher to make Salisbury’s top six. That was a very stout squad. Michael Ogden won his second individual 2A state title that year, and Clint Comadoll, Spencer Storey, Christopher Derrick, David Derrick and Abraham Post were All-CCC performers.
The breakout for Carlton came last spring. As a junior, he played No. 2 singles for the Hornets and went 12-3. In dual-team matches, he was 12-0 at No. 2 doubles.
Carlton helped the Hornets win their sixth straight outright Central Carolina Conference championship and he made the All-CCC and All-Rowan County teams.
“That was a big step last year, going from No. 7 to No. 2 all at once,” Carlton said.
Carlton and Mathias De Comarmond, the Hornets’ No. 4 player, competed as a doubles team in the 2A individual tournament and reached the regional. They lost in three sets in the regional match that would’ve qualified them for the state tournament.
Carlton plans to play individual singles this spring and has the realistic goal of making the state tournament.
Carlton’s college choice comes with mixed emotions, as his family has strong ties to Catawba.
His admiration for UK Wildcats basketball comes from his father, Kevin, who came to North Carolina from the Bluegrass State.
“I applied to Kentucky and got an acceptance letter,” said Carlton, the youngest of three brothers. “That was a big day for my family.”
A strong student with a 4.2 GPA, Carlton was recruited to play tennis by Belmont Abbey and Mars Hill.
“But Mars Hill has 11 players on the team and Belmont Abbey has about 25, so that kind of eliminated Belmont Abbey,” Carlton said. “I really liked Mars Hill when I visited. It’s a beautiful campus and they’ve got a great tennis program.”
If all goes according to plan, Carlton will wind up his academic career at the University of Kentucky. He’s going to study political science and criminal justice at Mars Hill. He hopes that will lead to admission to the University of Kentucky College of Law.
“Kentucky is the dream school,” Carlton said. “I’d definitely see some basketball games.”

SALISBURY — Carson senior Zachary Marchinko accomplished amazing things as a senior and is an easy choice as the Post’s... read more