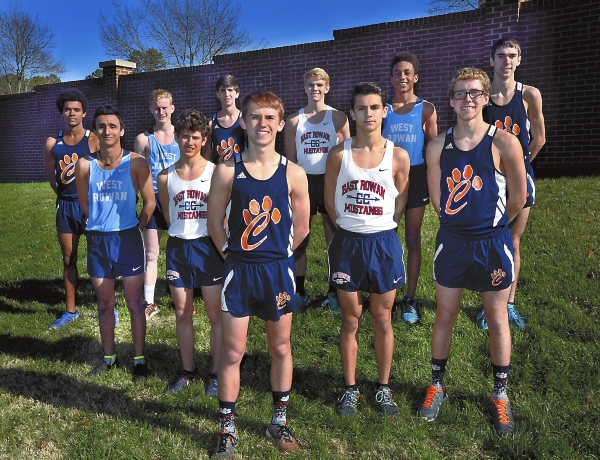 SALISBURY — Carson senior Zachary Marchinko accomplished amazing things as a senior and is an easy choice as the Post’s Runner of the Year for boys cross country.
Marchinko, a Charlotte 49ers signee and the South Piedmont Conference Runner of the Year, also was honored as a junior.
He’s been so good for so long that it’s easy to forget that he was never a solo act. He was just the pacesetter on a great team that will take its place in county history.
Marchinko was sidelined by illness for the 3A state meet, which was like the Carolina Panthers taking the field for the Super Bowl without Cam Newton. But the Cougars did their best without him and placed ninth. That’s something for all of them to be proud of long after their competitive running days are over.
Marchinko always kept things in perspective. Even when he ran 15:44 in the Rowan County Championships at Dan Nicholas Park to shatter the meet record, he was more concerned with how far he could lead his teammates, then with how many records he might break.
He was more excited about six Cougars finishing in the top 12 in the Rowan County Championships than with his blazing individual time. Those high finishes meant half the all-county team would wear the blue and orange of the Cougars. That was important to him.
East Rowan owned Rowan boys cross country from 2008-13. Fueled by champions such as Ross Oden, Cole Honeycutt and Conor Honeycutt, the Mustangs pounded out six straight county titles.
But Carson took command the last two years. Besides winning the county this season, the Cougars won the 10-team South Piedmont Conference. Even with Marchinko competing at far less than 100 percent, they were the runner-up team in the 3A Midwest Regional.
Garrett Ingold, a senior, broke 17 minutes several times this season. He was runner-up in the Rowan County Championships and sixth in the SPC Championships. He also was the leader for the Cougars in the State Championships with Marchinko sidelined.
Senior Dylan Koontz also turned in great times in the 16s. He was fourth in the Rowan County Championships and fifth in the SPC Championships. He posted Carson’s second-best times in the regional and state meets.
Placing consistently high for the Cougars were junior Grant Doby, senior Nick Cox and sophomore Jonah Evans. That trio placed fifth, seventh and 12th in the Rowan County Championships.
Doby is fighting an illness and was unable to attend the all-county photo session, but he was in the thoughts of his five teammates who were there.
The other six members of the all-county team come from East Rowan and West Rowan. Three from each school earned spots, and that’s not surprising. Those two teams were very even. East took second in the Rowan County Championships by a 50-59 margin, but there also were meets where the Falcons edged the Mustangs.
East’s Sean Incardona, a sophomore, will be a contender to become the county’s top gun in 2016. Incardona placed third in the Rowan County Championships and seventh in the SPC Championships. East senior Nikolas Pillsbury earned an all-county spot with a ninth-place finish in the county meet, while East sophomore Ross Alexander was 11th.
West sophomore Andrew Burgess (sixth in the county meet, 10th in the SPC meet) looks like one of the county’s future stars, and hard-working junior Cameron Butler (eighth in the county meet) also returns for the Falcons in 2016. West will miss senior Michael Anton. He was 10th in the county meet.
There were seven repeaters on this year’s all-county squad — Marchinko, Koontz, Ingold, Cox, Evans, Incardona and Butler.
Before closing the books on boys cross country, it should be mentioned that Salisbury didn’t have any all-county runners but still had a super season.
While the Hornets were a distant fourth in the Rowan County Championships, they placed second in the 2A Midwest Regional and 15th in the 2A state meet.
The Hornets won their third straight Central Carolina Conference title and had seven All-CCC runners — Matt Washko, Alex Yang, Keegan Dillon, Reilly Gokey, Roarke Burton, Sam McNeely and John Yang.