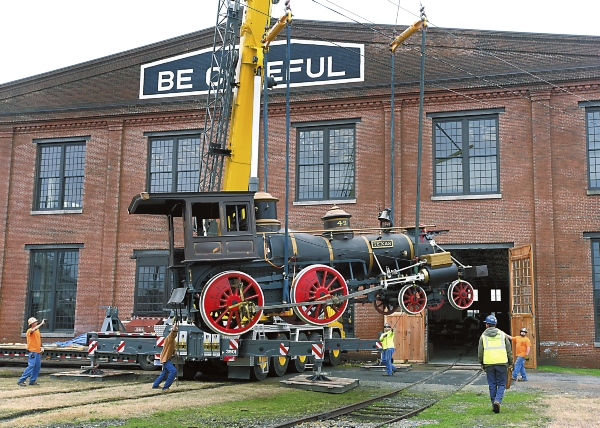 The 1856 locomotive "Texas" and 1880's tender arrived at the N.C. Transportation Museum by truck to be renovated at the Museum by "Steam Operations Corporation." The locomotive was lifted by crane from the truck and set on tracks. photo by Wayne Hinshaw, for the Salisbury Post

Famous 1856 engine will come to Spencer Shops for restoration The 1856 locomotive “Texas” and 1880’s tender arrived at the N.C. Transportation Museum by truck to be renovated at the Museum by “Steam Operations Corporation.” The locomotive was lifted by crane from the truck and set on tracks. Scott Lindsay, president of “Steam Operations Corporation” checks the engine. photo by Wayne Hinshaw, for the Salisbury Post

The N.C. Transportation Museum welcomed a 159-year-old locomotive Tuesday for historical research and restoration.  The Civil War era 1856 Texas locomotive, famed as part of the Great Locomotive Chase of the Civil War and one of the city of Atlanta’s most treasured objects.

The engine is expected to remain in Spencer for the majority of 2016.  In addition to research and restoration, the move also serves as a transition from the Texas’s former home in Grant Park’s Cyclorama building in Atlanta, where it has resided since 1927, to a new home, now under construction at the Atlanta History Center.

This is familiar territory for the N.C. Transportation Museum, which was home to the restoration of the Norfolk & Western Class J 611 steam locomotive. Work conducted at the museum saw the iconic engine return to the rails.  While the Texas will not be returned to operating capabilities, this unique piece of history will be studied and preserved for future generations.

The Texas is best known for the part it played in what became known as the Civil War’s Great Locomotive Chase of 1862.  Union spies, in an attempt to disrupt the railway lines of the Western & Atlantic Railroad, hijacked a Confederate-controlled locomotive named the General and began wreaking havoc to Southern supply lines.

In response, the Texas was commandeered by Confederate forces to give chase.  After a 51 mile railroad pursuit, the General was overtaken. A foot chase ensued and the Union spies were captured. The story was immortalized in both Buster Keaton’s 1926 film, The General, and the 1956 Disney movie, The Great Locomotive Chase.

The Texas may be best known for its wartime activities, however, those with the Atlanta History Center see the engine as a symbol of the city itself. “The Texas locomotive symbolizes Atlanta’s longtime relationship with railroads and the city’s importance as a hub for people, commerce, and ideas. No artifact can be more important for telling the story of Atlanta’s beginnings than this Western & Atlantic locomotive,” said History Center CEO Sheffield Hale.

The Texas pulled passenger and freight trains in the Atlanta area for 51 of the city’s most formative years, retiring from service in 1907.  It was rescued from the Western & Atlantic yard in Atlanta shortly after, narrowly escaping the scrap pile. In 1911, it was moved to an outdoor shelter in Grant Park. In 1927 the locomotive was moved indoors, occupying the Cyclorama Building in Grant Park, which was erected to house the locomotive and the Battle of Atlanta painting.

While the Texas saw restoration work in 1936 to more closely resemble its original appearance, and repainting between 1979 and 1982, never before has the engine been examined as a historic artifact, nor has a full restoration taken place.

Taking up residence in the N.C. Transportation Museum’s Bob Julian Roundhouse, the engine will have a piece by piece historical analysis conducted, followed by restoration work by crews from Birmingham, Alabama-based Steam Operations Corporation.  Rust and structural issues will be corrected and the engine will return to the earliest appearance for which there are records.

The public will be able to witness much of the restoration as it takes place in the museum’s Bob Julian Roundhouse. The building’s open repair bays will allow visitors to see the engine, while special tours and other programming are planned for an up close view.

N.C. Transportation Museum Executive Director Kelly Alexander said, “We are truly excited about this partnership with the Atlanta History Center and proud that they have entrusted such an amazing artifact to our care.  We look forward to showcasing the restoration work and our 57 acre facility to fans of the Texas.”

At the conclusion of the restoration, the Texas will return to Atlanta to appear in a new home at the Atlanta History Center’s Buckhead campus.

The museum will have updates through the museum’s Facebook page and through email channels.  Please check for the latest updates.

For more information on the Texas locomotive and the Atlanta Cyclorama, please visit:  http://www.atlantahistorycenter.com/explore/coming-soon-atlanta-cyclorama

By Hugh Fisher hugh.fisher@salisburypost.com SPENCER – The sights, sounds and magic of Santa’s voyage to the North Pole are part... read more