Area children “shop with a cop” at Walmart 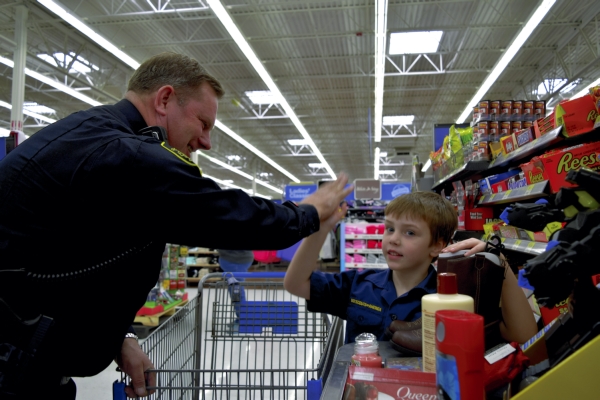 By Rebecca Rider and Shavonne Walker

Hugh Rice plans to surprise his grandmother with a Christmas gift he picked out for her with the help of Spencer Police Officer John Reap. Rice, 12, believes she’ll love the Carolina Panthers jersey he chose during a first-time event in this area — Shop with a Cop.

The shopping spree was made possible thanks to a number of individual and business sponsors as well as a $1,5o0 grant from Walmart. Rice was one of 11 area students who shopped at the superstore with local police officers and sheriff’s deputies to choose gifts for themselves, guardians or members of their immediate families.

Members of the Rowan County Sheriff’s Office and the  Salisbury, Spencer, China Grove and Landis police departments helped the students pick out items.

“It’s not about Christmas gifts. It’s to build that relationship with these children. In today’s society, you know, we want them to understand that law enforcement do more things than arrest people and chase people and things like that,” said Sheriff Kevin Auten. “We want to build a positive relationship with them and their families,” he said.
Each student received $100, half of which could be used on themselves, said organizer Rowan Sheriff’s Deputy Ryan Walker, also a school resource officer.

Many of the officers who helped with the event are school resource officers in area schools. Prior to shopping, students received a light breakfast and a snack at Walmart. Once the students shopped, they returned to First Baptist Church where they wrapped gifts and had lunch.

Walker began the process about two months ago with an application distributed to students from kindergarten through fifth grade. He reached out to guidance counselors who helped search for deserving students, some of whom may be struggling or in need, Walker said.

Some of the students would likely not receive a lot for Christmas, Walker said.

Some of the students also may just “benefit from a positive experience with law enforcement,” Walker said.

He added that a lot of times children don’t see law enforcement in a positive light.

Walker said he had not seen any other Rowan County law enforcement agencies doing anything similar, so he wanted to fill a niche.

Davaiiah Griffin, 8, was excited to shop for grandma, her aunt and uncle, her nana and sisters. She bought them chocolates and jewelry. She bought herself some knitting supplies. Griffin said her teacher taught her how to knit, and she plans to create a blue scarf, her favorite color.

Mark Mojica, 11, bought a bracelet for his mother, earrings for his sister and perfume for his other sister.

“It was fun to hang out with the officers,” Mojica said.

Courtney Hughes, 18, a student from East Rowan, helped the students wrap up their gifts. She said she saw the light in the children’s eyes and they seemed to enjoy it.

“I loved it. I love helping out in the community and working with kids,” Hughes said.

Spencer Police Officer John Reap asked someone from the Communites in Schools staff to choose a deserving child, and they connected him to Hugh Rice.

He said it’s a way to show people, particularly the students, there are officers who care. He hopes to help next year.