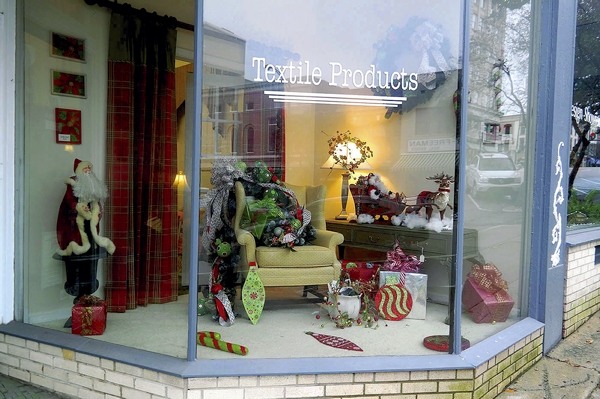 Submitted photo Storefronts across downtown Salisbury were awarded for their holiday decorations by Salisbury's Community Appearance Commission. Textile Products, at 121 N. Main St., also decorated a window across the street at 114 N. Main St. that would have been vacant otherwise.

Following a downtown walking tour filled with spirited discussion, the jury selected eight awards to honor the seasonal creativity and inspiration of the shopkeepers.

Queens Gifts at 221 South Main St. received the Best Overall award for the extraordinary planning and execution of a storefront vignette featuring cinematic Christmas memories through the decades. One can only imagine the fun owner Jane Wise Crosby and staff had recalling characters and scenes from National Lampoon’s Christmas vacation and other iconic holiday movies.

Most Original Window was awarded to Salisbury Wine Shop at 106 South Main St. for a single window the jury dubbed “Ebenezer’s Retreat.” Quite casually outfitted with vintage furnishings, the setting perfectly captures the slightly rumpled bedroom of the hapless Dickens character.

Best New Shop Award went to the Kitchen Store and More at 121 West Innes St. Housed in the 1883 Holmes Building, one of the most handsome and well–preserved downtown buildings, this inviting new store adorns the elegant building façade with tastefully simple holiday trim. Recently opened by Dennis Lunsford, the shop introduces a variety of fine kitchenware to the Salisbury shopper.

Lost But Now Found Award was given to a new niche shop with a similar name — Lost and Found. Located along “Hogan’s Alley,” and at the back of 128 East Innes St., the quirky entrance façade and sign sets the tone for the treasure trove of eclectic vintage articles arranged so creatively within. Far from traditional holiday décor, this façade must be commended for the unity of style. For those of a certain age, “Lost and Found” is a veritable trip back in time.

Best Themed Décor was awarded to Firehouse Sweets at 209 South Main St. With firefighter regalia filling the left storefront window, Lisa Welch, proprietor of the confectionery, skillfully weaves her brand throughout the more traditional holiday décor in the right window.

Another new bakery won the Visions of Sugar Plums Award. The luscious window display at Abigail’s Bakery at 113 North Main St. combines elegantly fresh tones of kiwi, grape and silver in a most inviting festive display. With this sparkling, eye-catching window, Abigail Young has designed a perfect prelude to the refreshingly spare and chic interior décor.

Best Community Partnership Award was given to Critters at 125 South Main St. for displaying the tree sponsored and decorated by Salisbury Pride for the ARC of Rowan Festival of Trees fundraiser and for hosting a Toys for Tots collection box. Owners Bob Lambrecht and Jon Planovsky are commended for sharing the true meaning of the season.

Year after year, the CAC thanks Linda Dukelow and her staff at Textile Products at 121 North Main St. for their always-tastefully decorated room vignettes and for adopting an otherwise vacant window across the street at 114 North Main St. This year the jury awarded the adopted window the Angel Revival Award, with its nostalgic nod to the lighted tinsel angels that adorned the downtown from the late ’90s until 2013.

There are many wonderful holiday displays in the downtown windows, and the jury always struggles to narrow down the field to a handful of awardees. The Community Appearance Commission thanks all the owners and staff who decorate their storefronts for the holidays and throughout the year, making downtown Salisbury such an enjoyable place to live, work, visit and shop.

All storefront decoration winners will be invited to the CAC Biennial Awards program in late winter 2016 where they will be honored for their contributions.

I made it back safe and sound from the Netherlands, and had the best time with my family and friends.... read more