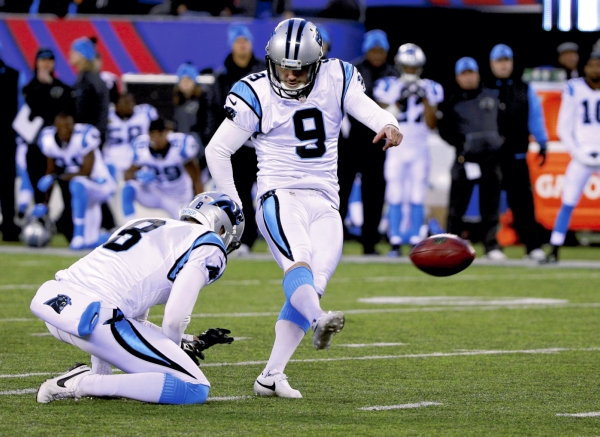 Carolina Panthers' Graham Gano (9) kicks a field goal to win during the second half of an NFL football game against the New York Giants Sunday, Dec. 20, 2015, in East Rutherford, N.J. The Panthers won 38-35. (AP Photo/Julie Jacobson)

EAST RUTHERFORD, N.J. (AP) — After one of the strangest and nastiest games this NFL season, Cam Newton had an odd feeling.

His Carolina Panthers had just shrugged off a record-tying Giants comeback to remain perfect with a wild 38-35 victory Sunday. Newton, who threw for five touchdowns to further state his case for NFL Most Valuable Player honors, wasn’t quite sure what he’d just been through.

“It was kind of a weird feeling in that locker room, and I’m still feeling kind of weird, but not enough to (not) celebrate,” said Newton, who also rushed for 100 yards. “We’re just trying to find a way to get victories.”

New York tied the score after trailing by 28 points in the third quarter, but the Panthers got to 14-0 on Graham Gano’s 43-yard field goal as time expired.

It was Carolina’s 18th straight regular-season victory. Newton has thrown for 19 touchdowns in the last five games and a career-best 33 in this so-far special season.

It looked oh so easy when NFC South champion Carolina led 35-7 with 5:32 left in the third quarter. Then the Giants (6-8) matched San Francisco’s 28-point rally — from the same score — against New Orleans in 1980.

One big difference: The 49ers won that game in overtime. The Giants trail Washington by one game in the NFC East, and have lost in the final minutes six times.

Carolina hasn’t lost at all, of course.

Carolina visits Atlanta and hosts Tampa Bay to finish the schedule. All three previous NFL teams to reach 14-0 — Miami in 1972, New England in 2007 and Indianapolis in 2009 — made the Super Bowl. Only the Dolphins won the championship, though.

The Panthers would secure home-field advantage throughout the NFC playoffs if Arizona loses Sunday night at Philadelphia. The 18 straight wins match the third-longest string in NFL history.

“These last two games are division opponents, and we’ll be in a hostile environment in Atlanta,” Newton added. “And we’ve got a tricky week with Christmas. We just have to find a way to keep moving ahead and make sure we stay on the side of the pendulum.”

The Giants tied it when Odell Beckham Jr., involved in a game-long helmet-smacking, shoving and jawing session with cornerback Josh Norman, got behind Norman for a 14-yard touchdown catch with 1:46 to go. Beckham had lost his cool several times as Norman was getting the best of him in their high-profile matchup. But he got free for a 40-yard catch and run that led to the tying TD.

Then Newton calmly guided the Panthers 49 yards to the winning kick.

“To go out there and just let them drive down the field is just mind-boggling,” said cornerback Dominique Rodgers-Cromartie, who blocked a field goal in the fourth quarter.

Play ranged from chippy to vicious, particularly as the Panthers banged Beckham around. He gave back, too, especially during one sequence when Norman crashed into him and Beckham wrestled Norman to the ground.

Three times, a frustrated Beckham was penalized for roughness. Norman also drew a flag for hitting Beckham in the helmet. And after his tying score, Beckham appeared to taunt Norman before he ran to midfield in celebration.

“He’s got the maturity of a little kid,” Norman said.

“You got two bulls going at it in a physical sport, a field full of alpha males, they’re not going to be playing patty-cake, patty-cake,” Newton added.

“He did lose his composure,” Coughlin said of Beckham. “I think throughout the course of the game he regained it. I won’t try to speak for him.”

Beckham tried to explain his actions.

He showed off his sprinting skills, and his toughness, on a 47-yard gain to set up Carolina’s first touchdown. The quarterback surged away from pursuers, then was slammed as he stepped out of bounds by rookie safety Landon Collins — Alabama hitting Auburn — for a late-hit penalty that began all maliciousness.

SALISBURY — Like Santa’s reindeer, Catawba sophomore Jerrin Morrison has the unexpected power of flight and proved it in Saturday’s... read more