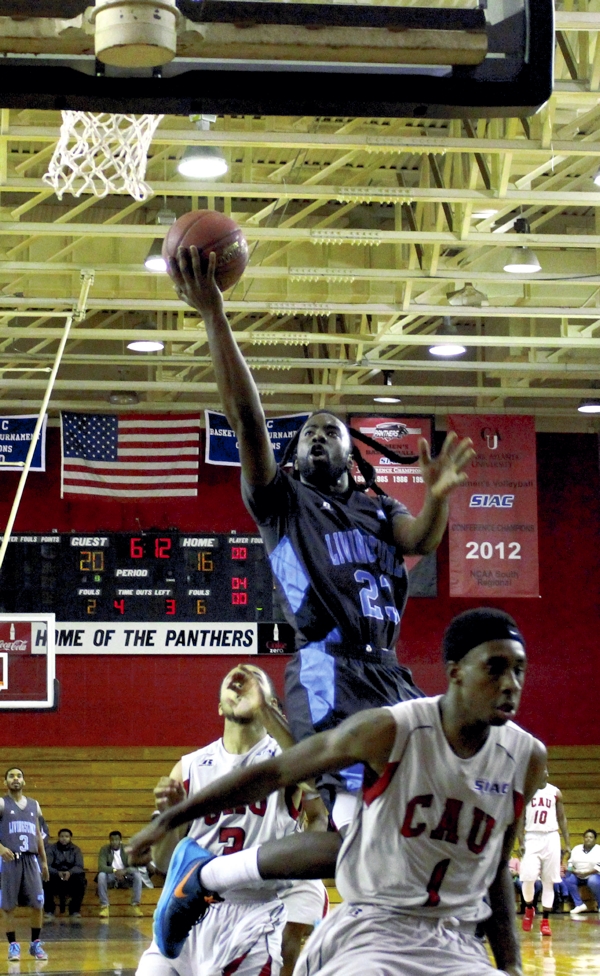 Livingstone's Ty Newman (23) goes up for a layup against Clark Atlanta. Submitted photo.

The only blemish was last-second 78-77 setback to Paine College on Friday night.

Livingstone (5-6) now breaks for Christmas and won’t play again until its home opener at New Trent Gym on Jan. 2, against Lincoln University.

Trailing by 80-77 with 17 seconds remaining, the Panthers’ James Arnold got off a 3-point attempt that was missed. Lawrence Freeman grabbed the offensive rebound, dribbled behind the 3-point line and drilled a buzzer-beater to send the game into overtime.

Livingstone led during the entire overtime period. LC was 11-for-15 from the foul line and scored 21 points in the extra period. The Panthers were 5-for-14 from the floor, including 3-for-6 from 3-point range during the OT period while the Blue Bears made all five of their field goal attempts.

Eric Dubose followed Newman’s big scoring day with 22 points of his own for Livingstone. Nasir Austin followed with 15 points while Daryl Trynham added 14 and Cordero Holt had 13.
Newman also led Livingstone in rebounding with seven boards. For the game, the Blue Bears outrebounded the Panthers, 46-44.
Clark Atlanta was led in scoring by Tim Sanders’ 22 points and 18 from Derek Harper.
For the game, Livingstone shot 46 percent from the floor (31-for-67), including seven-of-18 3-point shots.
Clark Atlanta University sports information office contributed to this article.