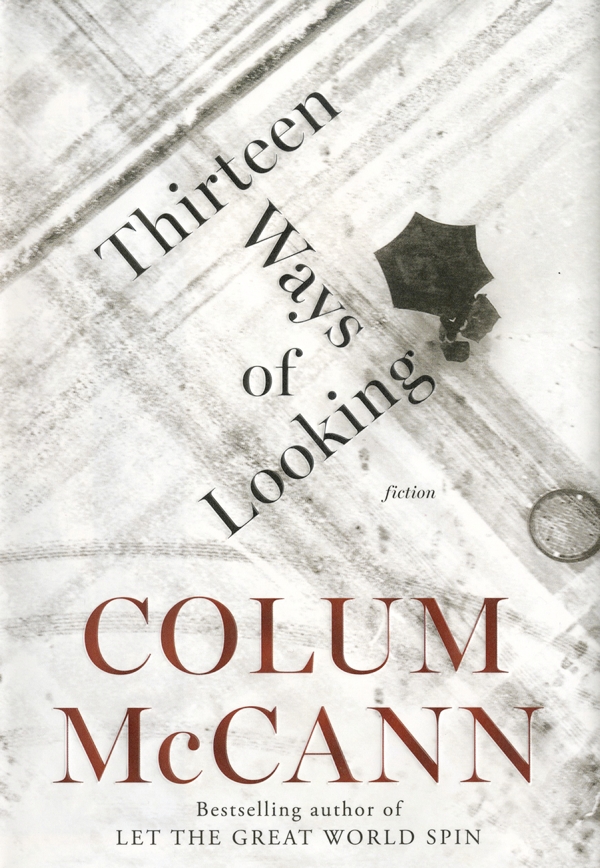 In this dark and piercing collection, “Thirteen Ways of Looking” — a novella and three short stories — Colum McCann works magic with his words, drawing readers in despite the prospect of disaster or perhaps because of it.

The stories unfold with breath-holding expectation at each turn.

The book is about loss — loss of dignity, self-worth, the loss of a child or life itself. But it’s also about discovery, regaining or overcoming. The short stories are like trials with the reader as jury.

Even in these short pieces, McCann creates vivid characters, people with distinct personalities and complete worlds.

He uses many declaritive sentences. Or sentence fragments. Long clauses are few, so the rhythm is taut: “Can never see a fire hydrant without thinking of the September dust coming down ten years ago.”

But here the construction speaks volumes: “His body seemed to drag his shadow behind him: slow, reluctant, but sharp.”

It actually deserves a second reading to pick up the deeper meanings, the nuances, even spots of humor.

“Thirteen Ways of Looking” is the novella about Mr. Mendelssohn and what becomes of him. Told by Mendelssohn at times, at others by the people looking at him, it brims with tiny revelations.

McCann perfectly describes the little indignities of age, the disappointments, loss of cognitive clarity and so much more.

Mendelssohn, a former judge, can be quite funny, his observations spot on. McCann follows him through just one day, then illuminates the circumstances of that day. How apt the title is.

While reading this book, take a good break after the novella, and appreciate its fine construction, the deeply held views of the author and think about the meanings embedded in the story.

After that, “What Time is it Now? Where Are You?” will be all the richer. It’s a story about a writer facing a deadline for a New Year’s Eve story. We enter that man’s mind as he struggles with an idea, develops it, discards part of it, wanders in unintended directions with it. He builds a back story, more and more characters emerge until he has to ask them what they’re doing. He struggles to find the kernel that will finally set the story free.

Take another short break, and make time to read the third and fourth stories without stopping.

“Sh’khol” and “Treaty” take on the theme of loss and discovery again. They dive into dark waters with desperate people. The stories journey into the darker parts of emotion but emerge with a spark of light.

“Sh’khol” is about a woman and her deaf and brain-damaged son. They live quietly in Ireland near the sea, where she has taught him everything, including how to swim. A former competitive swimmer, she finds relief and release in the water, and he finds joy. For Christmas, she buys him a wet suit. You know what can happen immediately, and when it does, it’s no less a gut-punch. What’s interesting is what happens next and how the mother reacts. The suspense and anguish of this story are engrossing.

Finally, “Treaty” speaks loudly of the world’s unrest, anger, inhumanity and immorality. The way it’s told, through the eyes of an older nun who has seen many kinds of suffering, speaks not just to her struggles with an old violence and an ebbing faith, but of the struggle of good against evil, of subterfuge and honesty and of how we change our faces to get what we want and rarely change at all.

The thoughts McCann gives her: “The days slipping by. Small rooms. Long hours. The curtains opening and closing. The disapearance of light. The blackened mirrors. The days spent weeping. The guilt.”

Some of this collection was written before an incident in which McCann was punched from behind and knocked unconscious when he tried to help a woman who was being attacked.

Some of it was written afterwards, and that violent incident influences the writer and his approach to the characters and plot.

This book deserves thought, attention, discussion, coming from one of the most interesting writers today.

Mack Williams: Something ‘different’ at Christmas

I recently heard the song “Somewhere in My Memory” from the Christmas movie “Home Alone” (1990). When my son Jeremy... read more