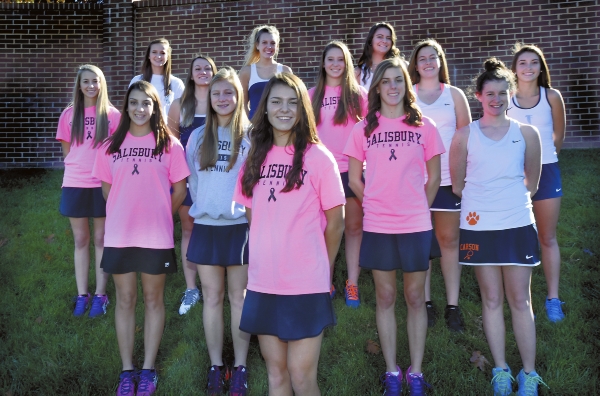 SALISBURY — Tennis began for Salisbury High senior Kayla Honeycutt with a group lesson when she was 5 years old.
“I was shorter than the net,” Honeycutt said.
After growing up to be tall, steady and smart, Honeycutt has done well with the sport she chose early in life. She’s the Rowan County Player of the Year for the second time in a row and she’s a four-time all-county player.
Joining Honeycutt for that introductory tennis lesson from instructor Bobby Cristmas were Kathryn Rusher and Grace Steinman, girls who would thrive alongside Honeycutt as classmates and teammates.
By age 11 they were competing in tournaments. It’s been quite a ride.
“We wanted to see how far we could go with tennis, and we went a pretty long way,” Honeycutt said.
Honeycutt was a big part of state-championship teams as a freshman and sophomore. She was 2A individual state champion as a junior. As a senior, she led the Hornets to the Western Regional final and she and Rusher finished as state runner-up in doubles in the individual tournament.
“We were a strong doubles team because Kayla has a great serve, and I was good at poaching,” Rusher said.
When Rusher and Honeycutt reached the 2A doubles final, it marked the 10th straight year that the SHS program has been represented in the singles or doubles championship match. Some years the Hornets have been involved in both title matches.
Six Hornets are part of this year’s 13-girl all-county team. All six had great years. Salisbury won its 13th straight Central Carolina Conference championship, with seniors Honeycutt, Rusher, Steinman and Emily Capito joined in the starting lineup by sophomores Julia Honeycutt (Kayla’s sister) and Maria Capito (Emily’s sister).
Four Hornets qualified for the individual state championships — with Kayla Honeycutt and Rusher qualifying as regional doubles champions and Julia Honeycutt and Maria Capito qualifying in singles. Maria Capito, who played No. 4 singles for the Hornets, won the CCC tournament and the Midwest Regional.
There also was considerable success around the county, including a singles qualifier for the 3A state tournament. That was West Rowan freshman Payton Holt. She was runner-up in the SPC tournament to Cox Mill standout Sarah Jiang and will play a major role in the future of Rowan County tennis.
A host of girls were strong enough in their conference tournaments to qualify for regional play — so many that it wasn’t possible for all of the regional qualifiers to make the all-county team.
North Rowan’s top player, junior Samantha Pritchard, repeats on the all-county team. She was all-conference and was a regional qualifier.
The other five players chosen for the all-county team are regional qualifiers from Carson and East Rowan.
Carson, which won two 3A playoff matches, finished second in the South Piedmont Conference and has three representatives — Gabi Jolly, Siera Fesperman and Emily Sloop.
East placed third in the SPC and qualified for the state playoffs. East has two representatives — Katie Barnes and Angel Scialdone.
Holt, Jolly, Fesperman, Barnes and Scialdone were All-SPC players.
The balance of power in the county could change next season, with Salisbury graduating four seniors. They’ll be separated after a lot of lessons, a lot of years and a lot of wins.
Kayla Honeycutt hasn’t decided yet where she’ll go to college. She’s a 5.0 student — yes, 5.0 — so she will have plenty of good options.
There are small schools with strong academic programs where she could continue to play tennis, but there’s also the possibility that she’ll go to a large school and leave tennis behind.
Whatever road she chooses, she’ll be a success.
“Kayla is really strong mentally,” Rusher said. “And she’s always a positive person.”