Movin’ on up: Gray and Heather Stout make the move from Salisbury to Uptown Charlotte 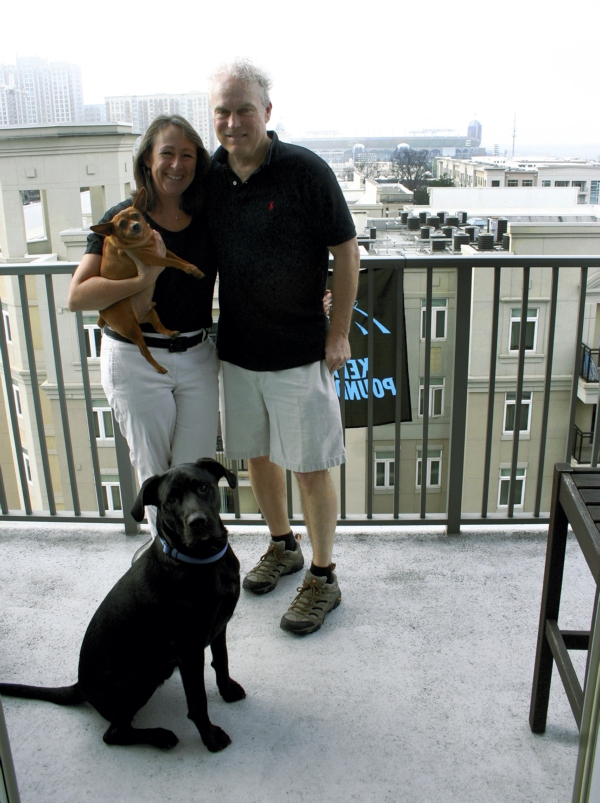 Gray and Heather Stout recently moved to Charlotte from Salisbury, where Gray now works for the Housing Studio. Panthers Stadium is visible from their ninth-floor apartment downtown. Photo by Susan Shinn, for the Salisbury Post.

CHARLOTTE — When architect Gray Stout finished his last major project in Salisbury — a new addition for St. John’s Lutheran Church — he found no other large projects on the horizon.

So Gray and wife Heather decided to move out. And up.

They now live in an airy two-story loft in the heart of Uptown Charlotte, just one block away from Gray’s new job with The Housing Studio — the firm where he started his career.

“I was ready to transition out of my sole proprietor practice,” says Gray, 55, who was ready to work in a team environment again after 23 years.

“All the boys were gone,” says Heather, also an architect, 52, now design coordinator for Nest Homes in Mooresville. “We didn’t need a big house. We were both ready for a change.”

Moving to Charlotte seemed the perfect choice. Not only would they be close to Gray’s work, they’d be close to their oldest son, and to Heather’s two sisters.

They’ve become trailblazers of a sort within their circle of friends.

You’re doing what we want to do, they’ve been told more than once.

“It’s difficult to make that leap,” Heather admits. Their house on Acorn Lane in Salisbury is 4,500 square feet, and their new apartment is just 1,500 square feet. “We’ve learned to live with a lot less.”

They hosted Thanksgiving dinner as always, just in their new digs. Heather realized the gravy boat was still packed up in Salisbury, but they made do.

For Gray, advances in technology have meant he now requires much less office space — a laptop and a flash drive are really all he needs now. “Professionally, you can work anywhere.”

Since their move in July, they’ve both had to get used to being urban dwellers.

“There are just so many people on the street,” Gray says. “It’s like being dropped into New York City. We’ve always come to Charlotte for concerts and games, but the downtown scene is really popping. Now I’ve gotten used to it.”

He’s also had to get used to today’s office environment.

“Everybody’s on headphones, and they email each other in the same office,” he says. “We have a lot of young people in our firm.”

The Housing Studio builds multifamily housing, typically in urban settings, and typically which include parking decks.

And up is where Gray and Heather are also living. They’ve moved into The Vue, a 51-story apartment building which started out as a condominium project in 2007. When that project fell through, The Housing Studio converted the building — which had been shuttered — into apartments.

The building has a pool, lounge, and exercise room on the eighth floor — one floor below the Stouts — as well as the Sky Lounge on the 50th floor with panoramic views of the city and cozy areas to watch the game.

“The building stays pretty well rented,” Heather says. They have a diverse mix of neighbors, including young professionals, and players from the Panthers and Hornets.

Neither Gray nor Heather seems star struck — after all, the athletes are the same ages as their three boys. One, in particular, seems to love Blue, their 1-year-old black Lab. The Stouts also have a Chihuahua, Hershey, 13, who’s not real sociable. But just about everyone in the building, Heather says, has a dog. It’s a nice conversation starter in the elevator, because she always asks about every dog she sees there.

With the dogs, they take advantage of nearby green space: Romare Bearden Park a couple of blocks away on Church Street, and the Old Settlers’ Cemetery, just off Fifth Street.

Gray and Heather return to Salisbury often, to check on the house, and to work. Gray has three projects he’s doing for local homeowners, and welcomes more opportunities here.

“I appreciate so much everything we had in Salisbury,” he says.