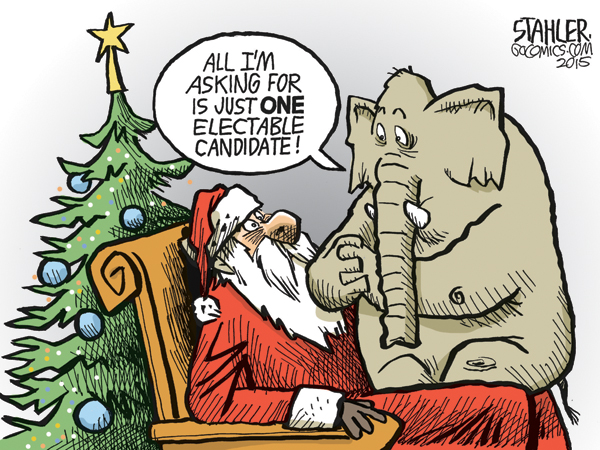 What does Santa have in his sack for Rowan County this year? Here are a few things on our wish list:

WiFi for every home that has school-age children so they can keep up with their school assignments. If Rowan-Salisbury students did not already have iPads and laptops thanks to the system’s digital conversion, we’d be wishing for those too. Technology is not the answer to everything, but try to be a 21st century student or worker without it. Doesn’t happen.

For those who choose to forgo computers and the world wide web, phone numbers to call “for more information” — not just web addresses.

For downtown Salisbury, more businesses with the staying power of Thread Shed and Stitchin’ Post, which have both been operating 40 years under current ownership. They have evolved from their original concepts, constantly adapting to changes in the marketplace.

For Rowan County shoppers, a Target, Publix, Trader Joe’s and more — and the discretionary income to attract them.

For local merchants, knock-your-socks-off websites to reach the segment of the population that shops after midnight, online.

For people who do all their shopping after midnight online, more free time to actually go into stores.

For everyone who might need it, a stocking full of batteries and chargers to make their new gadgets work.

For all the programs new and old that serve at-risk children, a sense of unity and collaboration so that, teaming together, they can reach more young people and be even more effective.

For frequent commenters on the Salisbury Post website, the realization that not everyone who disagrees with them is a (pick one) liberal/conservative whack job.

For new Salisbury Mayor Karen Alexander, lots of energy for ceremonial events and ingenuity for substantive ones.

For Fibrant, the city’s broadband system, a passel of new customers and a few wealthy suitors.

For the proposed Old Beatty Ford Road interchange on I-85, a speeded-up construction schedule followed quickly by quality developments.

For Food Lion and Delhaize America, continued success and satisfaction operating out of their Salisbury headquarters.

For people who have been stumped in their job search, a crash course in soft skills and technical skills that fit the openings available here now — and an appointment to talk with the folks at Jobs4Life.

For cancer patients, volunteers to give them rides to treatment through the American Cancer Society’s Road to Recovery program.

For veterans, volunteers to give them rides to treatment at the VA Medical Center in DAV Chapter 96’s vehicle.

For Kannapolis City Council, a champion minor-league baseball team to set up residence in a new downtown stadium, creating demand for a new hotel and all that comes with it.

For Jim Sides, former Rowan county commissioner, a bigger van with room for more stickers so he can continue to impress all who see him.

For the site of the former N.C. Finishing/Pillowtex plant, a genie to grant three wishes: cleanup, investment and rebirth.

For the Salisbury Police Department, a tough-minded new chief who commands respect and inspires excellence.

For Catawba and Livingstone colleges, a bumper crop of highly successful alumni who like to write checks to their alma mater.

For Donald Trump, a hair style that doesn’t make everyone stare and wonder, how long is that comb-over?

For Hillary Clinton, a hair style.

For Gov. Pat McCrory, a lifetime subscription to The News & Observer and a seat on the Raleigh paper’s editorial board.

For the North State Journal, the proposed statewide newspaper that would be delivered to homes in all 100 counties, investors with deep, deep pockets.

For the other 75-some newspapers operating in North Carolina, a slice of the fortune that politicians will sink into TV advertising in 2016.

For TV viewers, a remote that empowers them to skip political ads.

Laurels to the kindness of strangers like Lee Lanier of Reeds, outside of Lexington. Working on his farm one day,... read more