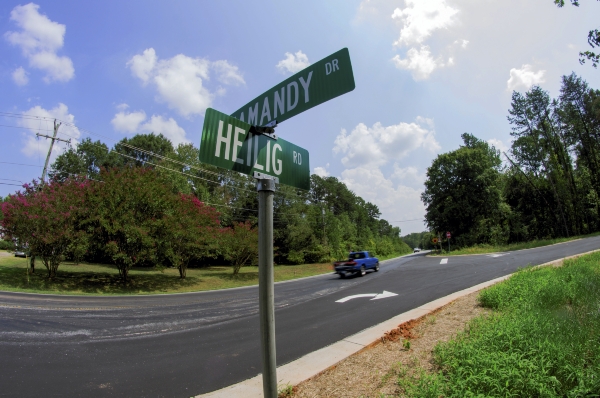 Josh Bergeron / Salisbury Post - Cars drive past a road that was created as a rear entrance to Gildan's plan on Heilig Road. Besides being an access point for Gildan workers, it's also the focal point of a new industrial park.

Significant economic growth could occur in 2016 for Granite Quarry.

Rowan Commissioners are scheduled to meet in the county administration building Monday at 9 a.m. for a called meeting about economic development. Because the meeting is scheduled to consist entirely of a closed session, details about contents of the discussion are relatively sparse. The lone detail included on Monday’s agenda references 30 acres of property off of Chamandy Drive.

The recently constructed road doesn’t yet appear on most maps. Chamandy Drive sits just south of Gildan’s facility on Heilig Road. Chamandy gently winds from Heilig Road to the Gildan plant’s rear entrance. It was part of a larger project that included extending water and sewer lines to Gildan and electrical work. The road’s main purpose was to build a rear entrance for Gildan, but an industrial park was an intentional byproduct.

Currently, the 30 acres is mostly just forested land and a road. However, it’s got access to a water and sewer line that could suit most any combination of businesses, according to RowanWorks Economic Development Director Robert Van Geons.

Land inside of the industrial park belongs to Rowan County. Its land became part of the Town of Granite Quarry as part of a voluntary annexation agreed to by Rowan County commissioners before the most recent three were elected in 2014.

When it first discussed its proposal with Rowan County, Triad said it would only be paid once it attracts businesses to the industrial park. It plans to charge commission on successful projects.  Triad would first construct speculatory buildings — structures without an exact client in mind — before luring business to the area, according to the company’s intitial proposal to commissioners.

The company’s agreement with Rowan lasts for one year and is renewable.

Exact details about what commissioners will discuss in closed session are unclear. Any vote taken by the board of commissioners, however, must occur in an open-to-the-public portion of the meeting.