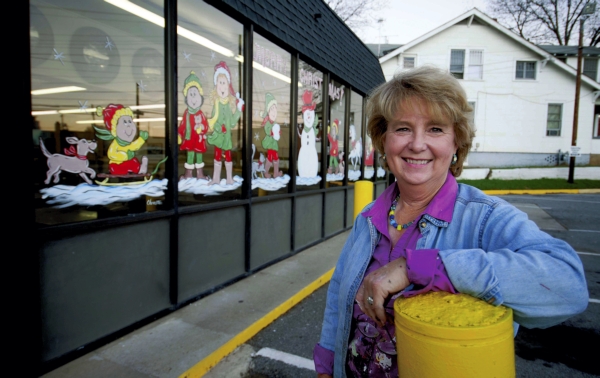 Cherrathee Hager stands next to the front window of the Checkered Flag Restaurant on South Main Street in Salisbury. Hager has been painting windows at local restaurants and stores in Salisbury the last few months, providing seasonal displays for their customers and the community to enjoy. Jon C. Lakey/Salisbury Post

The family car slows down at the red light, and a voice cries out from the back seat, “Mommy!  Look at the pretty windows!” Keeping one eye on the light, the driver glances over her shoulder at her little one’s newfound treasure, while other voices echo in the background, “Mom! Mom!  Can we go look? Please?”

This scenario has been the norm over the last couple of weeks at eight local businesses, who have enlisted the services of artist/entrepreneur Cherrathee Hager to transform their ordinary, everyday windows into panoramic scenes of Winter Wonderland for the enjoyment of their customers. Now these “happy windows” are available to everyone through the Community Cruise-By Christmas Art Show, showing now through the New Year in Rowan County.

Cherrathee has had a lifelong interest in art and business. She and her son Jeff Hager are owners of Twin Oak Development, a local home restoration business.  She has been awarded historic preservation awards from the Historic Salisbury Foundation for remodeling older homes. She considers their work in restoring homes to be like painting a three-dimensional canvas.

In recent years, her love for painting has resurfaced. She has won several awards for her work, including a blue ribbon at the Rowan County Fair.  She loves innovative ideas, one of which has been the Happy Occasions Yard Kards, a collection of life-size commemorative and decorative displays for personal and seasonal events, such as birthdays, anniversaries, new baby announcements, and Christmas, Thanksgiving and Halloween.

Her most recent brainstorm has been decorating local business windows with big-as-life seasonal scenes. The ball started rolling about six or seven years ago, when Cherrathee painted the front windows for her friend Kim Alexander, co-owner of Checkered Flag Barbecue. Then “life happened” and the idea got placed on the back burner until two years ago, when she shared the concept with new Pop Shoppe owner Vicky Stillman, who immediately became an enthusiastic supporter and client.

Suddenly the window painting project came off of the shelf and began to take on a life of its own.

“I was looking for something unique and  different,” says Stillman. Since that first encounter two years ago, Stillman has changed The Pop Shoppe’s window scenes four or five times a year, and had both locations painted this season. Most of the scenes are strictly for fun, but one window is what she refers to as her “Statement Window,” which recently encouraged visitors to get out and vote on election day. Now it displays a beautiful Nativity scene, with the song-inspired message that “Jesus Came — for the broken, for the lost, for the hurting, for the lonely, for the weakest.”

The idea has caught fire this season, and one thing led to another. All three Hendrix Barbecue locations were transformed.  Alexander had Checkered Flag’s windows repainted, and after viewing them, business owner Chris Earnhardt of Southgate Barber & Billiards couldn’t resist. Cherrathee was over at his new place this past week, putting the finishing touches on Santa Claus.

“All of these are original, unique designs,” Cherrathee says. She occasionally shows clients past drawings and photographs from her sketch book, but most of the time, they give her a theme or rough idea and let her creative imagination take over. Each individual window or scene tells a story and beckons the observer to relive pleasant, magic memories from their childhood, and create new ones with their children and grandchildren.

Some people have actually become involved in the project. They commented that some of the animals depicted in the scenes resembled family pets. One person asked for characters to be named after their children and grandchildren. And so, several of the figures were given actual names, commemorating these personal memories.

The artist has been busy over the last month, doing job after job. But the entrepreneur got a bigger idea — it dawned upon Cherrathee that her “Happy Windows” should not just be individual jobs, but a collective project, and a Christmas gift from her and her clients to the community.

She says, “I just want to spread some ‘holiday happiness’ and give back to the community. There is enough negativity out there. These scenes will bring some smiles to faces, and joy to families.”

Cherrathee’s clients heartily agree with her.  Stillman of The Pop Shoppe echoes the sentiment. “It is making a difference in the community.”

Alexander from Checkered Flag says, “She worked on it for six days. Customers comment on it; people are calling and coming by to take pictures.”

Timmy Garris of Hendrix Barbecue has hired Cherrathee to decorate his storefronts the past two years. “We get lots of comments from customers, especially children. And their favorite is the pig!”

The public is invited to experience this local phenomenon for themselves by driving by these local businesses during the holidays. The artist would like to emphasize that this drive-by art show is free, fun and family oriented, so she encourages everyone in the Salisbury-Rowan community to come out and participate.

The “Community Cruise-By Christmas Art Show” is available at your own convenience from now through New Year’s Day. Also, visitors to the show may pick up a special autographed Commemorative Card at participating businesses, while limited supplies last. For more information, contact Cherrathee Hager at 704-490-2001.