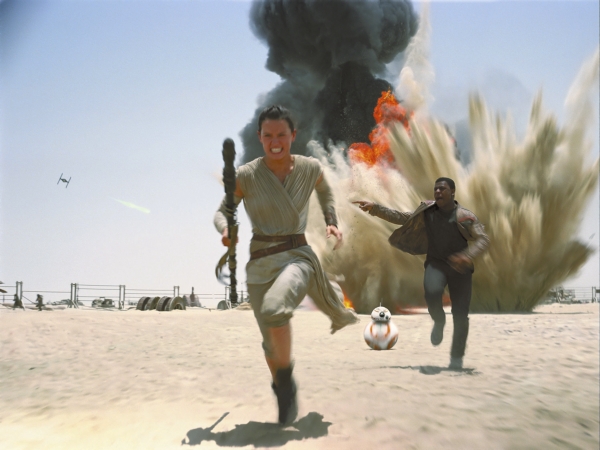 This photo provided by Disney shows Daisey Ridley as Rey, left, and John Boyega as Finn, in a scene from the new film, "Star Wars: The Force Awakens," directed by J.J. Abrams. (Film Frame/Disney/Copyright Lucasfilm 2015 via AP)

Review: ‘The Force Awakens’ is a ‘Star Wars’ film worth seeing From left, Rebecca, Kaitlin and Tonya Corl came in costume for a Thursday night screening of the newest chapter in the ‘Star Wars’ saga, ‘The Force Awakens’ at the Tinseltown USA theater in Salisbury. Rebecca Rider/Salisbury Post

“Star Wars” is a cultural phenomenon worth investing in, and its newest addition should be on every to-do list.

The secret to any great sequel is retaining the magic of initial films while adding enough intrigue to keep original fans entertained — and hook generations of new fans. “Star Wars: The Force Awakens” manages to seamlessly accomplish that feat.

The seventh film in the “Star Wars” series introduces a number of new characters — Kylo Ren, Rey, Finn and Poe Dameron are the most significant. You’ll smile at the sight of familiar faces when they flash on screen for the first time.

It premiered in Salisbury Thursday with several different showings at 7 p.m. A couple of the viewings sold out. Not every showing was full, but the excitement before, during and after the film topped any other movie this year. Attendees laughed, they smiled, probably scowled and perhaps cried. Rightly so, the film begins with the familiar musical theme and scrolling text in front of a field of stars.

The film is easily one of the most memorable in years. Harry Potter stands as the only recent series that can hold a candle — or a lightsaber — to Star Wars with its latest addition.

A horde of fans filed out of the 7 p.m. showing to the sight of another crowd waiting to see a galaxy far, far away. As fans left the theater, they whispered about memorable plot points in the latest “Star Wars” film. A massive glob of parked cars waited in the parking lot outside Salisbury’s theater.

The only spoiler worth paying attention to is that the film is great.

It picks up years after the sixth film. Or, perhaps it’s the third original? Trying to differentiate the films quickly induces headaches.

“Star Wars: The Force Awakens” is the immediate sequel to the only three worth watching — “A New Hope” (1977), “The Empire Strikes Back” (1980) and “Return of the Jedi “(1983). The best movie experience will come after watching the three immediate predecessors. Don’t bother with the prequels — “The Phantom Menace,” “Attack of the Clones” and “Revenge of the Sith.”

“The Force Awakens” begins about 30 years after Return of the Jedi, where the Rebel Alliance and Galactic Empire have taken up new names — the Resistance and First Order, respectively.

During the past several months, “Star Wars” released a number of trailers that received millions of views online. Fans scrutinized each one, hoping for even the smallest of details about potential plot points. Other movie trailers blast the entire plot across TV and computer screens months before a premiere. “Star Wars,” however, manages to keep important details secret.

It’s wise to watch the trailers, as they’ll give you a bit of important context about the film before seeing it. They manage to take a complicated “Star Wars” universe and condense it into bite-size pieces worth watching, even if you’ve been avoiding spoilers for months. You’ll leave the theater equally as surprised as any of the people sitting nearby.

I won’t reveal any significant spoilers here. Seek those out yourself. “The Force Awakens” is worth seeing with a bit of background knowledge to set the stage, but it’s wise to avoid conversation about the film with friends who’ve already seen the movie. Also, unplug from social media just to be safe.

May the force be with you on your spoiler-free journey to “The Force Awakens.”

With love, from Jacob: Balloon message travels 100 miles back to family

By Amanda Raymond amanda.raymond@salisburypost.com “This can’t be real.” That was one of Linda Hawkins’ first thoughts when she got the... read more