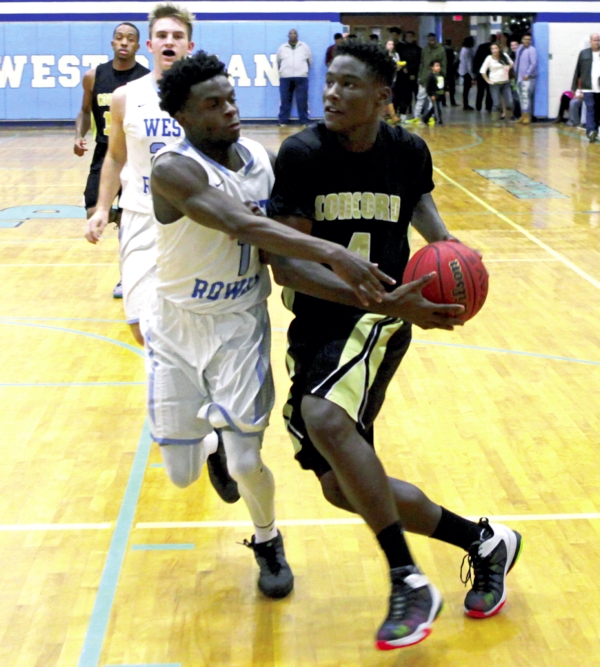 MOUNT ULLA — West Rowan’s boys probably played their best half of basketball this season on Friday night and still trailed Concord by six.
That was an ominous sign, and the Falcons couldn’t sustain that high level of execution in the second half. The third-ranked Spiders (7-1, 6-1 SPC) overwhelmed West in a decisive third quarter and won going away, 90-61.
“We rebounded a lot better in the second half,” Concord coach Jason Stowe said. “In the first half, West was attacking us on the boards pretty good.”
A lot went right for the Falcons (4-4, 3-3 SPC) in that first half, including two Martavio Rankin 3-pointers — one of them at the buzzer. West’s active post player Caleb Mauldin had 13 points at the break.
“We had some dudes putting their hearts on the floor,” West coach Mike Gurley said.
The Falcons managed to withstand the momentum created for the visitors by a pair of ungodly dunks by high-flying Hamsah Nasirildeen. Nasirildeen, a football wideout, is is only the third most heralded Spider, but he finished with a team-high 20 points.
“This is the first time that he hasn’t been in foul trouble,” Stowe said cheerfully. “He played about 20 minutes tonight and scored 20 points. He’s talented.”
A big part of West’s defensive game plan was trying to limit guard Ray Kowalski, a deadly shooter who poured in 38 points Tuesday against Carson. Jayson Delgado face-guarded Kowalski and held him to 13 points. Still, it was an efficient 13 points. Kowalski only rushed one ill-advised shot. When he was open, he was automatic.
Concord’s talented sophomore Rechon “Leaky” Black, recently offered a scholarship by UNC, didn’t assert himself in the first half, but he took over the game in the third quarter on both ends of the floor. He finished with a smooth, under-control 15 points.
Concord outscored the Falcons 22-6 in the third period, taking advantage of quick shots hoisted by West to run unselfish fast breaks.
“When you play a team as good as Concord, you have to use all the fundamentals that you work on in practice,” Gurley said. “We got into some situations where we settled for one pass and a tough shot instead of continuing to work to put ourselves in a better situation. That’s when the game got away from us very quickly.”
Rechon Black and Keenan Black, the football QB, had three buckets each in the third quarter, and at the same time, the Spiders were able to silence Mauldin with swarming, long-armed defenders.
When Paris Hillie scored for the Falcons midway through the third quarter, the Falcons trailed 51-40. By the end of the quarter it was 64-42 — and it was over. Alon Parker, who jumped off the Concord bench for 14 points, made a 3-pointer at the horn for that 22-point lead.
“We had to take care of the ball, we had to rebound, and we had to get back on defense,” Gurley said. “We stopped doing those things for a few minutes.”
Mauldin got several buckets in the fourth quarter, and freshman Payne Stolsworth knocked down his second and third 3-pointers of the night.
But Concord kept things rolling right to the final horn. The Spiders put up 48 points in the second half.
Mauldin scored 21 for the Falcons. He averages 22.
“We wish we’d played better for 32 minutes, but we’re still developing,” Gurley said. “We’ve just got to keep our eyes on the road and keep moving forward.”