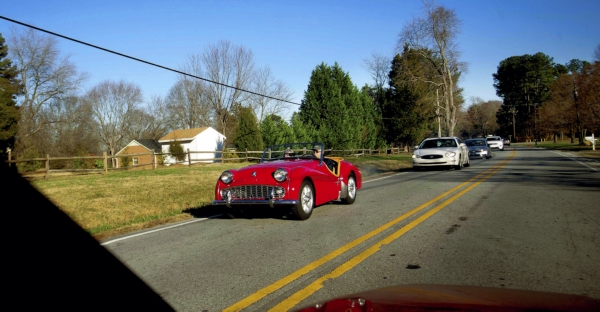 A couple took advantage of the sunny skies and temperatures in the upper-60s Wednesday to drive their convertible along Mooresville Road. The weather has been unseasonably warm for December. Jon C. Lakey/Salisbury Post

Warm December is latest in a wild year for weather

Temperatures are pleasant, grass is green and flowers are blooming. With half of the month complete, N.C. Climate Office data for the Rowan County Airport shows December 2015’s average temperatures as higher than the previous five years. National Weather Service Meteorologist Jeffrey Taylor said December temperature data for Charlotte — the closest location available — is about 9 degrees above historical averages.

Taylor said weather in the Charlotte region is likely to cool off into the weekend and warm up again next week. The National Weather Service doesn’t forecast weather far enough ahead to guess whether there will be snow on Christmas. With recent and historical weather patterns, however, Taylor said it’s unlikely flakes will fall.

“It’s very rare for most of our area, except some of the mountains, to have snow on Christmas,” Taylor said.

It’s nearly guaranteed snow won’t come in time for China Grove’s Christmas in the Grove event, so organizers plan to coat a hill in town with fake snow.

December’s warm weather is the latest in a wild year.

Dallas Goodnight, who works at LL Goodnight and Sons in South Rowan, half jokingly said he’ll make a trip to the beach if temperatures stay warm after Christmas. Because of the summer drought, the store now purchases its hay from Kansas. That hay is more expensive, but it’s also the only option. Locals largely don’t have any hay to sell.

Because of fall rain and warm December weather, he said, some types of grass are actually growing. Rowan County Extension Director Amy-Lynn Albertson said daffodils are beginning to sprout and some roses are blooming.

“We’ve really had a roller coaster of temperatures,” Albertson said. “Plants haven’t had enough chilling hours for them to go dormant.”

If temperatures drop rapidly in the coming days, Alberston said some plants might die completely rather than going dormant.

“It’s been a really rough year and incredibly hard to be a person who grows plants in 2015 if you did not have irrigation,” she said.

Kindergartners bring the spirit of Christmas to the courthouse

By Shavonne Walker shavonne.walker@salisburypost.com It only took a few minutes for a group of North Hills Christian School kindergartners to... read more