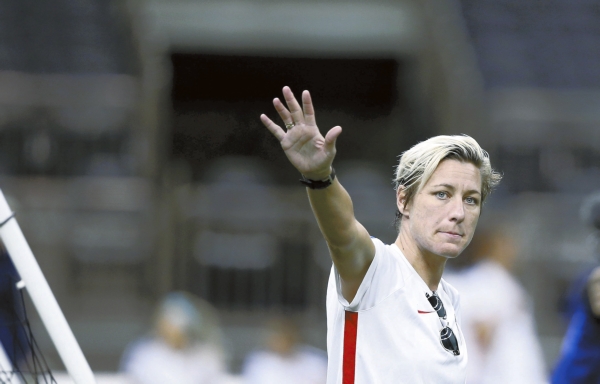 U.S. forward Abby Wambach waves to fans at the end of a practice session Tuesday, Dec. 15, 2015, in New Orleans for Wednesday's final U.S. victory tour match, against China. Wambach will be playing in her final match with the team. (AP Photo/Gerald Herbert)

NEW ORLEANS (AP) — Abby Wambach threatened to score several times in the final game of her extraordinary career, but China shut out the World Cup champion United States 1-0 on Wednesday night to hand the Americans their first loss on home soil in more than a decade.

Wambach played 72 minutes, managing two threatening headers and a shot from inside the penalty area before subbing out of a match for the final time.

The career leader in international play — for men and women, with 184 goals— kicked off her cleats and hugged each teammate on the field before walking to the bench, smiling, to embrace her coaches and remaining teammates as the crowd chanted her name.

“I love this team,” Wambach said in comments delivered on the field to fans after the game. “It has been my pleasure and my honor to represent you all, the fans for as long as I’ve been able to. … The future is so bright. These women are going to kill it.”

And she made it clear that, despite the loss, it was time to celebrate, saying, “Bourbon Street, watch out,” before dropped the microphone on the field walking off alone as her teammates waited behind, applauding with the rest of the crowd.

China scored in the 58th minute, when forward Wang Shuang volleyed in a bounding cross from Wang Shanshan,

Kristine Lilly and Mia Hamm started that 3-1 loss Denmark in Philadelphia, while Wambach came in as a sub. The U.S. women had gone 92-0-12 since.

The Americans nearly tied it in the 87th minute when Lindsey Horan beat goalkeeper Zhao Lina, but Horan was ruled just a step offside when she received the pass from Christen Press.

That was the closest of several near misses.

Horan’s header forced a diving save by Lina in the 82nd minute. In the 84th minute, Carli Lloyd’s pass sent Press into the penalty area for a hard drive from the left side. But Press, who had subbed in for Wambach, shot it right at Lina. In added time, Emily Sonnett’s header went just over the cross bar.

The game wrapped up the U.S.’s nine-game victory tour in which it went 7-1-1, outscoring opponents 40-3.

Wambach got her 10th start of the year in her send-off game and also was designated the captain.

It was apparent from the outset that the Americans’ plan of attack was based in part on sending high crosses into the penalty area in hopes of connecting with Wambach for one of her trademark headers. She put two headers toward goal in the first 2 minutes, but both were blocked away by defenders.

In the 30th minute, Wambach was able to sidestep a defender and attempt a lunging toe-poke from about 10 yards out, but couldn’t muster the power or placement to beat Zhao.

Some of the greats in women’s soccer were drawn to the Superdome for the game, including Mia Hamm and Brandi Chastain, who starred on the 1999 World Cup-winning squad.

Official US Soccer banners lining field-level walls and covering the tunnels to the locker rooms read, “Only one Abby.” And when the teams took the field shortly before kickoff, fans along the sideline held up yellow and black cards with the same slogan.

Before the starting lineups were announced, U.S. Soccer presented Wambach with a rendering of her famous, game-tying head-ball goal against Brazil in the 2011 World Cup. Just below the image was the word, “POWER.”

Wambach was ready to take it all in. She appeared to record video as she walked of the field after warm-ups of fans chanting her name, and she paused briefly to wave.

A festive crowd of nearly 33,000 acknowledged Wambach at seemingly every opportunity.

Notes: U.S. Forward Alex Morgan asked out of the game late in the first half after pulling up lame with apparent muscle tightness in her right leg. Morgan was replaced by Horan.