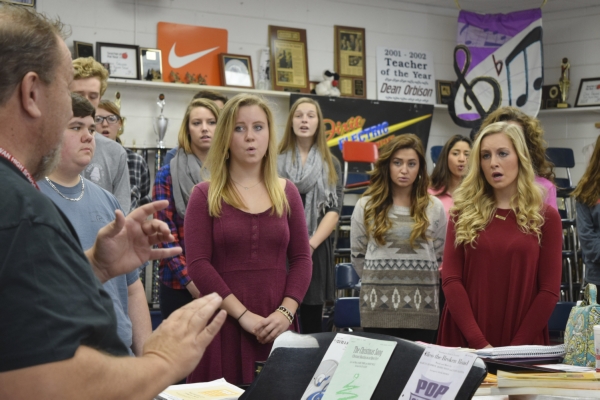 Burgess, center left, will be performing in the Honors Performance Series at Carnegie Hall.

Performing in Carnegie Hall as part of an international chorus is one of the highest honors a high school choral student can receive, East Rowan Choral Director Dean Orbison says. For two of his students that just became a reality.

Kaitlyn Burgess and Corbin Elliot are both seniors at East Rowan, and while they both have plans to pursue a career in music or theater, they never dreamed they’d be able to perform at Carnegie.

“You hear about Carnegie hall whenever you’re a kid,” Elliot said, “but whenever you grow up and your choral director said, ‘Yeah you’ve got a chance to go and sing there,’ one of the most renowned concert halls in the world, you’re like, ‘Whoa.’”

Burgess, Elliot and 4,000 other applicants worldwide fought for 400 coveted choral seats for Carnegie Hall’s Honors Performance series. And won them. Orbison said high school students in 49 states and 15 countries submitted audition tapes for the chance to sing in the chorus.

Total, the concert series received about 8,000 audition tapes for choral and instrumental performances. It’s only had a choral component for the past three years, Orbison said, and this is the first time he’s referred students to the program.

While Orbison said he wished he could recommend all his students, he chose Kaitlyn and Corbin because they’re planning on pursuing music. They have a musical background besides just vocal music and have good grades. They’ve excelled, Orbison said.

“I’m very passionate about helping young people to see their potential that they didn’t think they had,” he said.

When their teacher suggested the audition, Burgess and Elliot were shocked.

“At first, I didn’t think I would get it, because, I don’t know, it just seemed so prestigious,” Burgess said.

But they recorded their auditions using the same songs they planned to sing for their college applications. Burgess recorded her audition on her phone. The wait to hear back was a long one, they both said, but worth it.

Elliot and Burgess are familiar with choral honors. This year they performed in the N.C. Honors Chorus, which is composed of the best high school singers in the state. There they performed under Eric Nelson, a world-renowned conductor and composer.

“We all come together and it sounds better than anything I’ve ever heard,” Burgess said.

She’s excited about how much better Carnegie will be.

On Feb. 4 Burgess and Elliot will arrive in New York City for four days of practice and sightseeing. They’ll get tours of the city, go to see a Broadway show and practice alongside singers from the U.S., Japan, Hong Kong, the United Arab Emirates and other countries around the world.

They both say they wouldn’t have made it this far without their teacher.

“He gets you places, he’ll get the job done, he’s very serious about what he does,” Elliot said.

Orbison brushes the praise off, saying teaching music is just his passion.

“It’s just a passion of mine. I want them to exceed and excel as far they can,” he said.