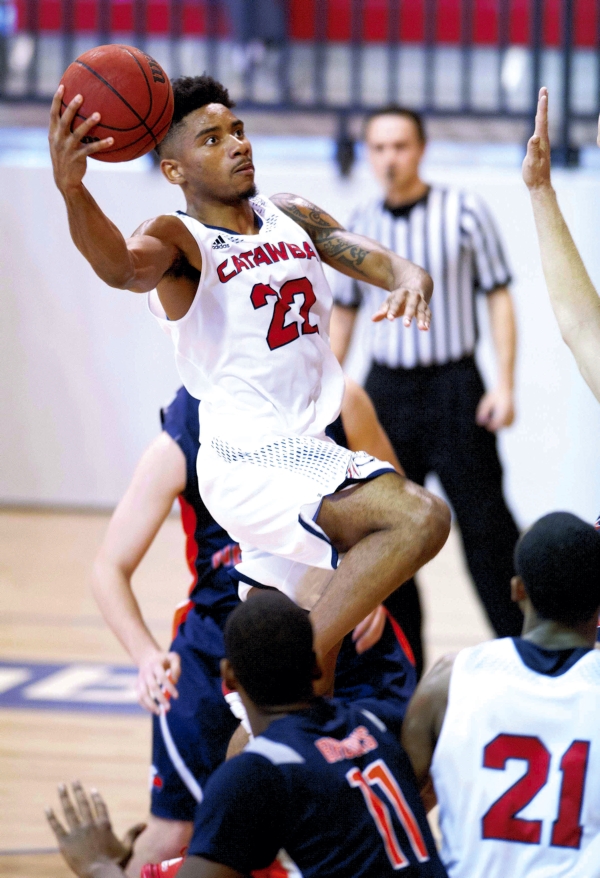 SALISBURY — Jerrin Morrison’s slump is over, and Catawba got back into the win column by holding off Carson-Newman, 69-65, in college basketball action last night at Goodman Gym.
Morrison had been struggling (1-for-9 in Monday’s loss to Erskine), and last season’s SAC Freshman of the Year has appeared to be a prime candidate for the dreaded sophomore jinx. But Morrison looked like his old self with a 26-point outing on 11-for-18 shooting.
Actually, Morrison may have been even better than his old self.
“Jerrin had some big games last season, but he still rushed things,” veteran Vismantas Marijosius said. “As far as his shot selection, as far as driving the gaps and kicking the ball to open teammates, this was one of the best games he’s ever played. I wouldn’t compare this game to last year. He looked really mature tonight. He played a very mature game.”
The key stat was Catawba shooting 14-for-15 from the foul line after experiencing early-season disasters on free throws. The only miss came when Morrison was still jacked up after he was fouled on a monstrous, driving slam over multiple defenders.
Morrison, Rakeen Brown and Jameel Taylor all went 2-for-2 on free throws in the stretch run. Taylor sealed victory for the Indians (4-5, 3-2 SAC) when he calmly swished two with four seconds left.
Coach Rob Perron inspired the improvement on free throws. He proved to the Indians this week that he could make 65 percent with his eyes closed — and that was better than Catawba was shooting as team.
“We tried to keep it light-hearted, but I knew we had to try something different,” Perron said. “We were 287th in the country in foul shooting.”
Morrison and his teammates got the message.
“When Coach started making free throws with his eyes closed, we knew we had to fix it,” Morrison said.
Carson-Newman (4-6, 0-4 SAC) is better than it sounds, as it’s already played Queens and Lincoln Memorial, two of the SAC’s top three teams. But the Eagles were bad in the first half. They turned the ball over 12 times and got off only 18 shots to Catawba’s 34. Catawba had a 21-2 run early and took a 31-23 lead to the locker room.
Morrison had 12 points at the break.
“He got an early tip-in, he made his first 3-pointer, and he started playing with a lot of offensive confidence,” Perron said.
Morrison credited a couple of things for his turnaround, including an extra shooting session on Monday that lasted for hours, and a new, high-rising haircut.
“I’ve been trying to find my mojo,” Morrison said. “I really wanted to have a good game for my mom.”
Carson-Newman played significantly better in the second half. Guard Charles Clark scored 22 to lead the Eagles, but he was 1-for-8 on 3-pointers. Ben Sealey, a waterbug defender, was the main reason. Sealey played 26 minutes due to early foul trouble that plagued Brown, Catawba’s starting point guard.
When Morrison dunked, Julian Sampah made a layup, and Taylor got a four-point play when he was fouled on a 3-pointer, Catawba led 57-40 with 6:33 remaining.
“We were doing a good job with some run-and-jump defense when they were probably looking for straight man-to-man,” Perron said.
It looked over, but the Eagles mounted a furious late run that was aided by careless Catawba turnovers and ill-advised fouls.
Catawba’s lead was down to 63-60 with 18 seconds left, bu Morrison made two free throws.
Christian Harris made a 3-pointer for Carson-Newman with 10 seconds left, but Brown made two free throws to push the lead back to 67-63.
After Clark hit two free throws to make it a two-point game with five ticks left, Taylor nailed his two free throws to clinch victory.
“”We’re out of class now, so guys have been in the gym working a lot, paying dues,” Marijosius said. “This was a big one for us. Carson-Newman is always tough and they’ve still got a lot of guys from a national-tournament team.”