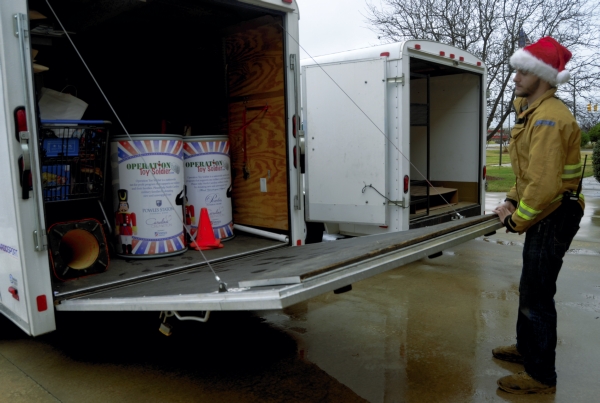 Local emergency responders, law enforcement and other volunteers collected these toys at Walmart for Operation Toy Soldier, which will go to military families, and not shown are toys collected for Toys for Tots, which will go to local families in need. David Brady, seen here, with the Rowan County Rescue Squad was one of those who volunteered. Shavonne Walker/Salisbury Post

Arbe Arbelaez will be able to make some much needed phone calls this week to some eligible families who will receive Christmas presents through Toys for Tots.

Arbelaez, the local coordinator, was concerned he wouldn’t have enough to meet the needs this year. After a weekend donation site was set up at Walmart, he’ll be able to give more.

There were hundreds of toys donated and more than $2,600 raised for not only Toys for Tots but Operation Toy Soldier during a 64-hour period at Walmart.

Although Toys for Tots and Operation Toy Soldier both had collection bins placed throughout the county, both programs were in need of more contributions to serve a greater number of families. Russ Roakes with Powles Staton Funeral Home said last year they placed four barrels in the area and this year were able to have 20, and he hopes that number will continue to grow every year.

Roakes said he’s grateful to the sheriff for inviting Operation Toy Soldier to be a part of the collection this weekend and to the community for their generous giving.

“He’s certainly taken our project under his wing, and we can’t thank him enough. It’s been tremendous,” Roakes said.

Dozens of local law enforcement, emergency personnel and volunteers were at Walmart collecting toys and money to buy even more toys for both programs.

Mike Brady, who was instrumental in coordinating the weekend collection drive, said he simply asked Walmart about the fundraiser to see if they could collect toys for one day, and the store offered their space for the entire weekend. It’s the longest single collection drive they’ve done with the two toy programs.

There were so many wonderful stories of sacrifice from people who gave this weekend, Brady said.

Brady met a 7-year-old who’d just left the hospital, still in his pajamas, who asked him mother if he could donate $5 he’d received. It was his last. A homeless man reached into his pockets and donated the last of his change to the drive, Arbelaez said.

Brady’s son, David, who is with the Rowan County Rescue Squad, managed to split his time between working with the squad and donating his time to help with the drive. He also recruited fellow squad members and friends.

Sheriff Kevin Auten said if it wasn’t for the corporate partners, especially Walmart, the drive would not have been possible.

Walmart store manager Michael Edwards said the store was glad to help with the drive. He expects to be able to offer the store next year in hopes of a bigger, better collection drive.

Donations of new, unwrapped toys to benefit Operation Toy Soldier will be collected at the following locations until Thursday:

Give someone a new adventure in cooking

By Deirdre Parker Smith deirdre.smith@salisburypost.com If you’re looking for a scrumptious dessert or want to know how to make artificial... read more