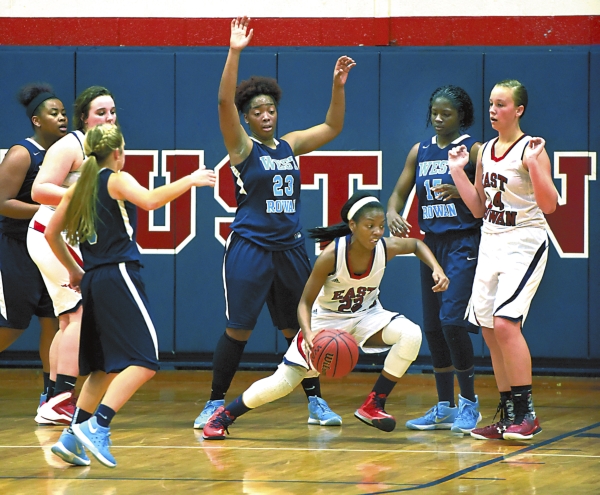 GRANITE QUARRY — East Rowan’s girls threw their best punch and gave West Rowan a bloody nose, but the Falcons still escaped the East gym with a 56-53 high school basketball victory and with their undefeated record intact.
East overwhelmed the Falcons, 50-32, on the boards, with Brittany Small pulling down 16 rebounds. East also limited West star Khaila Hall to five points, but the Falcons found a way to come out on top.
“We kept our poise when things weren’t going well and that was the biggest reason we won,” West coach Ashley Poole said. “We got a lot of good leadership from our seniors, we did what we needed to do in the fourth quarter, and we pulled it out.”
West won the final quarter, 23-11.
Shenique Pharr scored 20 points for the Mustangs (5-4, 2-4 SPC). Twin sister, Shenell Pharr, added 11.
Egypt Alexander had 17 points for West (6-0, 5-0 SPC). Taylor Martin had 16, including 13 in the first half. Freshman Mary Sobataka scored 12, all in the second half.
West was plagued by foul trouble early, shot poorly and dug a hole.
“We weren’t boxing out and East was beating us down the floor,” Martin said. “It was looking scary.”
The Falcons trailed by double digits late in the first half. A flurry by Martin pulled them within five points, but a 3-pointer by East freshman Lauren Weisensel gave the Mustangs a 31-23 halftime lead.
East held off the Falcons in the third quarter, and a stick-back by Small put East in front, 42-37, heading to the final eight minutes.
Sobataka hit two 3-pointers, one from each corner, early in the final quarter, as the Falcons caught up.
The key bucket was made by Hall, who didn’t let a 2-for-12 shooting night shake her confidence. With the Falcons down by one, she drilled a 3-pointer from the top of the circle for a 51-49 West lead with 2:21 remaining.
Hall dished for a Shanice Miller layup and a four-point lead, and Miller calmly swished two game-clinching free throws with 20 seconds left.
Hall had nine rebounds, five assists and four steals.
“We got more rebounds in the second half, and Egypt really worked hard in the post,” Martin said. It was a tough loss for the Mustangs, who did a lot of things right.
“For 29 of the 32 minutes, we stuck to the things we needed to do and we really played well,” East coach Danielle Porter said. “But we had a lull for about three minutes when we didn’t rebound and didn’t get back on defense and they really hurt us with their transition game.”
West ended a four-game losing skid against the Mustangs.