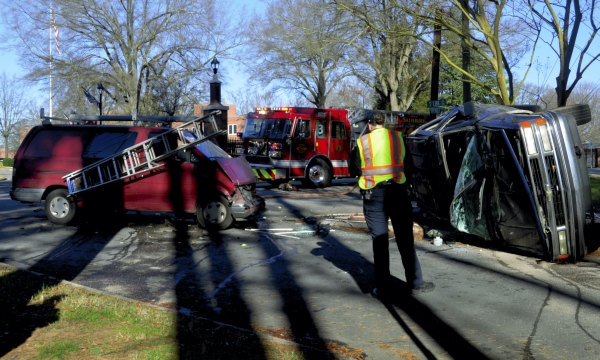 The occupants of these two vehicles were able to walk away with minor injuries after a collision at the interesection of South Link and Brenner avenues. Shavonne Walker/Salisbury Post

No one was seriously injured Tuesday morning following a two-vehicle collision that left one vehicle on its side, police say. The crash occurred at the entrance to the Hefner VA Medical Center and both occupants were able to get out of their respective vehicles themselves, emergency responders said.

Loyd Priddy, 87, of Walkertown, was exiting the entrance of the VA in a Chevy Suburban when he failed to yield to the oncoming vehicle, a van driven by Mark Childers, 53, of Salisbury. Childers was traveling on Brenner Avenue toward Statesville Boulevard.

The Suburban rolled onto its side and came to rest against a crepe myrtle tree at South Link Avenue. The crash occurred at 10 a.m. not far from Noah’s Playloft Preschool.

Salisbury Police Officer Brad Jordan said essentially Priddy entered into the path of Childers, who was unable to reduce his speed in time. No charges will be filed. Both men were not seriously injured and were seen walking around the scene. Priddy did have a bandaged wrist. The two men were the only occupants in their vehicles.

Traffic into the VA was detoured around the collision which temporarily blocked the intersection of South Link and Brenner avenues until the vehicles could be towed from the scene. Salisbury Fire personnel did stabilize the Suburban and tied it off to a tree.

Salisbury Fire Department and Rowan EMS responded. Both men were checked out at the scene, but were not taken to the hospital.