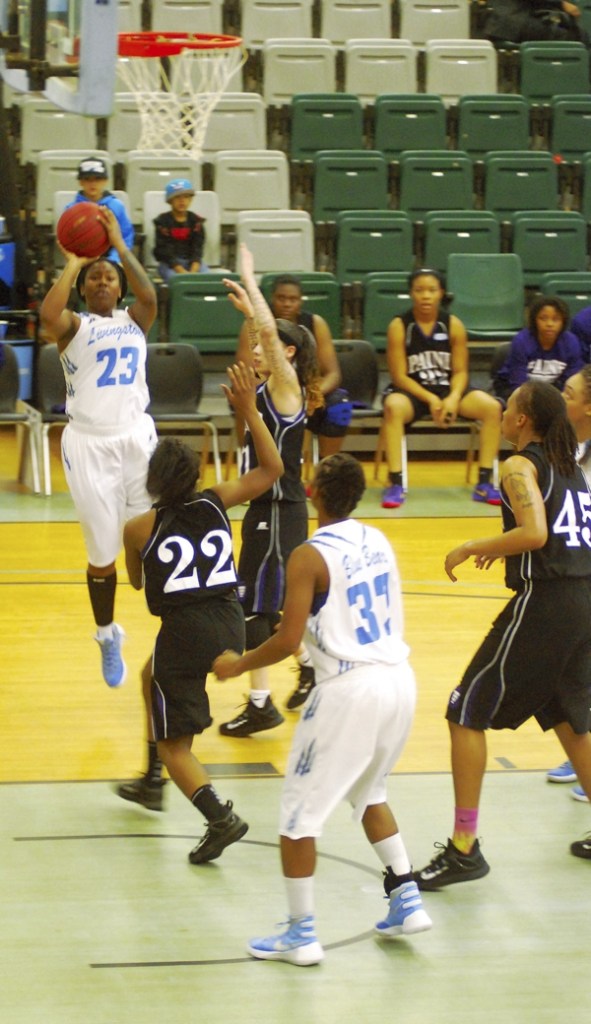 Guard Brittany Taylor had a double-double for the Blue Bears with 13 points and 11 assists. She also came up with four steals. Forward Toxiana Wilson scored 10 points and grabbed eight rebounds.

“An ugly win, but we’ll take it,” said Livingstone head coach Anita Howard. “Our chemistry is just still not where we’d like it to be, with all the injuries and everything. It’s been hard to have everybody at practice at the same time. But the plan is to be playing our best by tournament time next semester.”

Livingstone’s students are already on Christmas break, so less than 100 fans were in attendance last night. The lack of atmosphere didn’t seem to bother Livingstone, as the Blue Bears came out red-hot, scoring 24 first-quarter points. They led by nine points at the end of the period.

A layup from Searcy put the Blue Bears back on top and the home team went out to a 41-33 halftime lead. Livingstone connected on 50 percent of its shots in the first half (17-for-34).

The Blue Bears led by as much as nine points in the third quarter, only to see Paine cut the deficit to 55-52, heading into the final period.

Curtis broke the tie for good with two free throws with 1:26 left, giving the Blue Bears a 74-72 lead. Searcy had a put-back and Taylor sank two fouls shots with 28 seconds left, making it 78-72. Guard Zena Lovette, playing in her first game for Livingstone, had a steal and layup that iced the issue with 11 seconds left.

Livingstone had played its first five games of the season with just seven players, so Lovette was a nice addition.  There should also be more players added to the active roster in January.

“She’s going to be key for us,” Howard said of Lovette. “She’s been sitting out a couple of years, so she’s got to get back into the swing of things —  but that was a good start for her. She plays hard.”

As far as losing several decent leads, mainly due to 26 turnovers for the game, Howard looked at it as growing pains.

“We’ve just got to execute better down the stretch,” she said. “The girls started doing their own thing a little, so we’ve got to work on the discipline to stay within the offense. And we have to figure out how to maintain our intensity throughout the game.”

Livingstone is now 3-3 and heads to Lakeland, Fla., for Florida Southern’s tournament. The Blue Bears play Lake Superior State on Thursday and Emmanuel on Friday. Both games have 2 p.m. tip-offs.