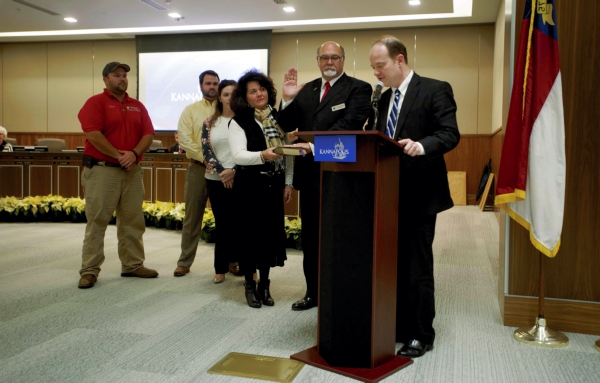 JON C. LAKEY / SALISBURY POST Judge Marty McGee (right) administers the oath of office to Councilman Tom Kincaid as he stands with his family. Kincaid was later sworn in as mayor pro tem. The City of Kannapolis held a dedication ceremony for their new City hall and Police Department on Monday night to grand fanfare. The City Council held their first meeting in the vast council room by swearing in the re-elected board members and chooseing a new mayor pro tem. Monday, December 14, 2015, in Kannapolis, N.C.

KANNAPOLIS — Amidst the hubbub of the City Hall dedication, council members managed to do some business.

City Council held its first meeting in its new chambers. The 5,300-square-foot events room houses a semi-circular dais and is known as the Laureate Center. It can be divided into three separate rooms, and typically only the middle space will be used for council meetings. However, the entire room was open on Monday and still could not hold the overflow crowd of more than 450. After the dedication, at least half the group adjourned to the lobby for refreshments while others stayed for the 30-minute meeting.

Council members went about their business with brisk efficiency. Councilman Tom Kincaid was elected by a unanimous vote of 6-0 to serve as mayor pro tem (he did not vote).

Council members heard nothing but kudos from speakers from the floor.

“I’m so excited about this day,” said Jacqueline Anthony, president and CEO of the Kannapolis African-American Museum and Cultural Center. “You have done a stupendous job, and I am very proud of each and every one of you.”

“I am so proud to be able to tell people I live in Kannapolis,” she said. “We’ve been through some hard times, but with your help and your vision, people are gonna know we’re Kannapolis again.”

Carol Spalding is president of Rowan-Cabarrus Community College which has a building next to City Hall.

“Congratulations on a wonderful building, a great event, and welcome to the neighborhood,” she said.

“This was a fantastic group of 15 people who were attentive, genuinely interested, and a pleasure to be around,” Chavis said. “The instructors had as much fun as the participants. We are very excited to be able to share our knowledge and expertise with our citizens. Our classes are open to anyone who lives or works in the City of Kannapolis.”

“We had so much fun,” said Bell, whose husband, Larry, was also a participant. “I recommend it to anybody.”

The class donated $1,200 to a team of Kannapolis police officers who are cycling to Washington, D.C., this year to remember law enforcement members who have died in the line of duty.

• Eric Davis, finance director, presented City Council with a budget award from the Government Financial Officers Association. This is the 17th consecutive year the city has received this award, he noted.

Because of the Christmas holidays, City Council’s next meeting is 6 p.m. Jan. 11, at 401 Laureate Way. Council adopted the 2016 meeting schedule as part of its consent agenda.

A recent amendment to firearm laws by the General Assembly means that permit processing may be delayed. House Bill 562,... read more