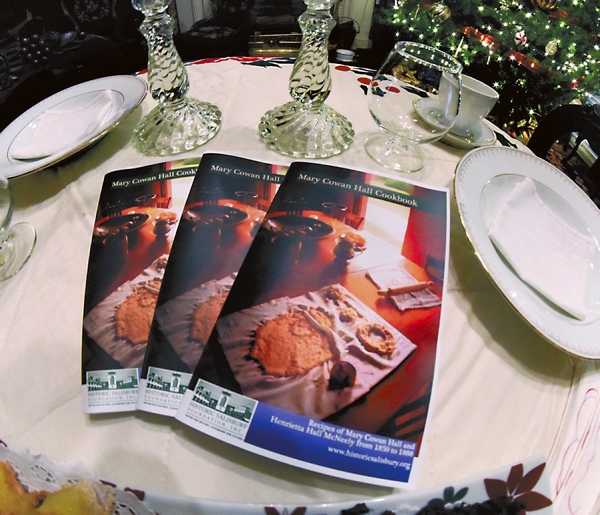 Wayne Hinshaw, for the Salisbury Post Recipes from the Mary Cowan Hall Cookbook describe foods served at the Hall House in the 1850s.

Give someone a new adventure in cooking If you’re looking for a scrumptious dessert or want to know how to make artificial oysters, Historic Salisbury has just the cookbook for you.

“Mary Cowan Hall Cookbook” is based on an old, faded cookbook  that belonged to a woman in Greensboro who was a friend of Mildred Seaber, the granddaughter of Dr. Josephus Hall.

According to the story, Mildred gave several Hall family items to her friend, Mary Frances Smith. After speaking with Hall House docent Barbara Upright, Smith donated to cookbook in 2014.

That’s when volunteer Carol Rathbun and other started trying to decipher and transcribe the recipes.

Rathbun is quick to point out that these recipes, with their archaic references to measurements and products, aren’t meant for your next dinner party.

“It was ver hard to read the book,” Rathbun said. “I tried to transcribe it, but I’m sure there are some mistakes.

“Mary Cowan Hall and her daughter, Henrietta Hall McNeely both have recipes in there. You can tell the difference in their handwriting. … The handwriting is gorgeous,” Rathbun said.

The left-side pages of the cookbook are copies of the original pages. The right side pages are a transcription of the recipes.

Rathbun said she found several unusual ways of describing ingredients. Often, the women put a period after amounts, like 3. cups or 12. eggs, and some ingredients, like saleratus and pearlash no longer exist. Both were leavening agents, similar to baking powder or baking soda.

“It’s more a piece of history than a cookbook,” Rathbun said. “We thought it would make a great stocking stuffer.” The women often cooked for large groups and the recipes reflect that.

Most of the recipes are for desserts, though there is that Artificial Oysters one, which creates a sort of fritter out of green corn, flour and butter. The women also wrote recipes for shoe blacking (shoe polish) and whitewash for the outhouse walls.

There’s even a recipe for a rheumatism treatment that uses an egg white,  apple vinegar and turpentine to create a concoction to rub on several times a day. Bet that smelled good.

Former Historic Salisbury director Brian Davis shot the photos for the cover, and the book was printed in the HSF office and stapled together. It’s being sold for $5.

That’s just one cookbook idea for cookbook lovers. Several Food Network personalities have new cookbooks, as well as several renowned chefs from around the world, in every cuisine you can imagine.

Start or add to you collection of the Savor the South series with the books that came out this year: “Sunday Dinners,” by Bridgette Lacy; “Beans & Field Peas,” by Sandra Gutierrez; “Crabs & Oysters,” by Bill Smith of Crook’s Corner in Chapel Hill; “Catfish,” by Paul Knipple and Angela Knipple; “Gumbo,” by Dale Curry; and “Shrimp,” by Jay Pierce.

Stephanie Tyson and her partner, Vivián Joiner were in Salisbury this fall with a new cookbook from their restaurant, “Sweet Potatoes,” in Winston-Salem. “Soul Food Odyssey” explores the roots of what’s known as soul food and why we call it that, and includes more delicious recipes from Tyson, a talented chef.

For further exploration of the African-American flavors brought to our country, “The Jemima Code: Two Centuries of African American Cookbooks,” by Toni Tipton-Martin

“Thug Kitchen: Party Grub” keeps popping up in lists of cookbooks to give, but we can’t print the subtitle here, or a photo of the cover. The first book, “Thug Kitchen,” made it to the New York Times bestseller list, and this one has more than 100 recipes for health, vegan meals, sides, snacks and cocktails. It’s got quite a few expletives, so not for the delicate cook.

Garden & Gun — the strangest name for a magazine I’ve ever seen — has a cookbook now, titled simply, “The Southerner’s Cookbook.” The magazine is lush, and so is the cookbook, with fabulous photos and impressive recipes, all in the Southern tradition.

In the same vein, “Pure Pork Awesomeness,” by “Top Chef” star Kevin Gillespie is a tribute to the pig, with recipes to cook many of its parts.

Emeril Lagasse’s “Essential Emeril,” the chef says, is like a memoir in recipes. He goes back to some of his early recipes and retools them, as well as presenting step-by-step tutorials.

Katie Workman’s “Dinner Solved” remains popular, with its kid-friendly recipes and “fork in the road” options to alter the meal slightly for different tastes.

For the beer lover in your hose, “The Beer Bible” is a must., with information for beginners, intermediate beer lovers and beer geeks, including “if you like X, try Y” features.

America’s Test Kitchen has two popular shows on public television, multiple cookbooks and a reputation for doing things the right way. “100 Recipes Everyone Should Know How to Make” would be suitable for new cooks, cooks who are bored to death by their repertoire and seasoned cooks who are looking to tweak their essentials.

Girls on the Run takes over city streets

Elementary and middle school girls took to the streets of Salisbury in a big way on Saturday morning. The Iredell/Rowan... read more